for some reason, i've had a few emails and linkedin questions asking me what i think about "shift left." i thought i'd put out a public answer.

i'll start with: i do not use the term "shift left" because:

instead, i think of supporting the growth and evolution of a system over its lifetime and i don't need "shift left" to do that.

i thought about what "shift left" might mean, before searching the web to see what people say it means.

at first hearing, the words seem to be talking about the position of things . so perhaps it means moving people physically to sit more on the left. which seems ridiculous and couldn't possibly mean this.

but perhaps it is referring to a factory conveyor belt assembly line production system. and we want to "shift left" on the conveyor belt system. assuming the belt is moving from left to right, where left is 'less produced' and far right is 'finished' then it is actually referring to time , rather than physical position.

if it does then it seems a tad overkill to say "shift left" rather than "test early."

the art of saying words that sound simple but which actually obscure your message. when you speak consultant people pretend to understand you, so that they don't appear ignorant. they then repeat your phrases and spread ambiguity. you are then employed as a consultant later to fix the situation caused by the implementation of the ambiguous words.


"test early." surely it can't be that simple?

a quick web search search later, and i'm not picking on these articles, these were simply the first in the web search (well done on your seo skills):

apparently, it does mean test earlier.

except when it means:

testing early seems like a good thing to do

i have nothing against the notion of "testing stuff earlier."

i do try to "test stuff earlier."

and i can do that without the concept of "shift left."

shift left implies to me that i have:

and that is all it implies to me.

a simple model of testing

i present to you, a simple model of testing that does not require "shift left:"

"evaluate" seems a bit "consultancy speak". feel free to use 'compare' if you want to.

evaluating involves comparing the model of the system to find out:

i could model this as:

i can change the level of observation and that changes my testing:

remember this is a simple model that may not capture all nuances associated with testing a system.

where does time fit in?

depending on when, in the system of development, i build the model and evaluate the system under test against the model, i will be able to evaluate for different properties and behaviors.

for example, i can't evaluate the gui until the gui is written, but i can evaluate the 'design' for the gui or the 'wireframes' to see how it supports the expected behavior.

here's a diagram of what i mean: 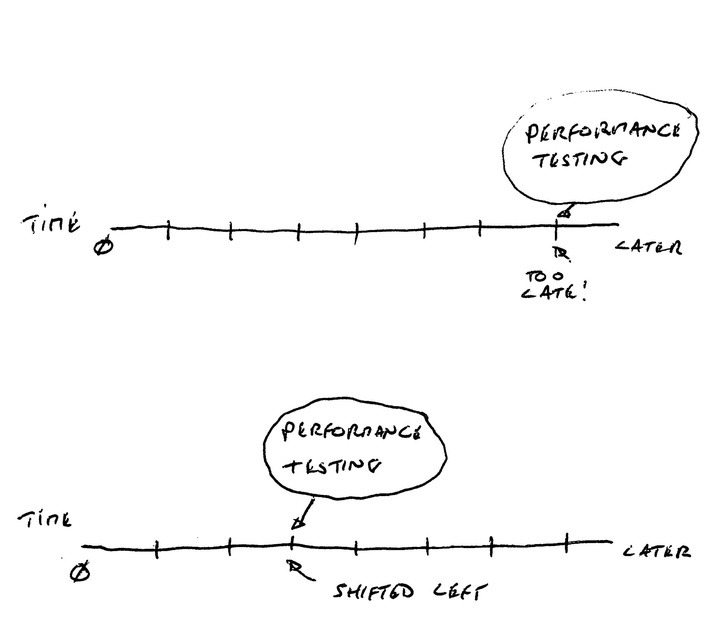 now we do performance testing earlier. we have shifted left.

the wording of "shift left" doesn't cover these nuances. which doesn't mean that practitioners of "shift left" do not consider those nuances, but i have seen teams implement "shift" as a 'move' rather than a nuanced 'spread and adapt' operation.

shift implies no change to the system of development

"shift left" concentrates on the testing and seems to assume that we can do that without changing the system of development.

in the simple model, i test when there are opportunities to test that add value either to:

if we can "shift left" regardless of our approach to developing the system then we have not implemented an effective software testing strategy. i.e. if you can perform exactly the same "test the gui" task earlier, then why didn't you? it could imply some organizational issues.

if we change our system of development and do not change the approach to testing then, frankly, we are not conducting testing effectively.

if we start incrementally building the system in smaller chunks then we can take advantage of this to test in shorter bursts earlier rather than a long cycle of testing at the end.

if we introduce automated build processes then we can take advantage of this to automate assertions that are simple and time-consuming during the build process, and cut down on the available time for exploration.

think evolution and growth instead of linear transformation

we build systems that evolve and grow.

when we build systems. we don't "shift left". we craft a system of development (which includes testing) to meet the needs of the system we are building, to respond to risks that we identify and the issues that we find. the systems grow and evolve. we need to be good enough to identify improvements we can make and take advantage of opportunities to test.

i believe that the notion of "shift left" is not required if we change our model of system development.

"shift left" does not fit well into my model of system development.

you can find a supporting video at https://youtu.be/aamp5skiwqa