nuodb 2.0 was recently released and it delivers some major new geo-distributed management features, along with database automation and sql and java stored procedures. the geo-distribution capabilities enable users to distribute a single logical database across multiple cloud regions or data centers. the database automation functionality offers easy provisioning for standard configurations based on templates, while stored procedures bring the capability to put more complex logic into the database layer, in a similar way as it is done in traditional rdbms systems such as oracle or mysql.

the new version of nuodb provides support for geographically distributed databases, each of which can be a single, acid-compliant logical database running across multiple data centers located in separate geographic regions. this ability makes it possible to achieve 24/7 application availability, and support applications that require low-latency access for all their users across different geographic regions.  one example would be a financial institution with offices around the world or, as nuodb referenced during the 2.0 launch event, a voip provider with users all over the world.

in order to minimize latency, the local client is going to talk to the local transaction engine geographically close to the client. the on-demand caching mechanism is then going to ensure that the clients within the same physical region are accessing the data with low latency; there will be no need for coordination between different regions. for commits, nuodb supports different isolation and durability modes that ensure that the users always see consistent durable data. 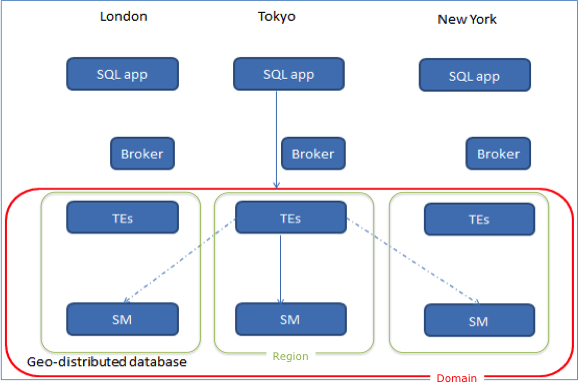 in nuodb 2.0 the concept of regions was introduced. regions can represent a geographic location of the database, for instance london, tokyo or new york in our example above. in order to provision a region we need to define it for the nuodb brokers and agents in the default.properties file using the region attribute.  later on in this article we will show a configuration for regions.

the challenge with the geographically distributed setup is how to ensure data consistency across the regions.  as mentioned above, nuodb can support different kinds of commit protocols.  in its simplest form (called local commit in nuodb terms) the transaction engine (te) sends the commit message to the storage manager (sm) asynchronously and then it sends back an acknowledgment to the client. this is the fastest operation but the least safe; it does not ensure durability. 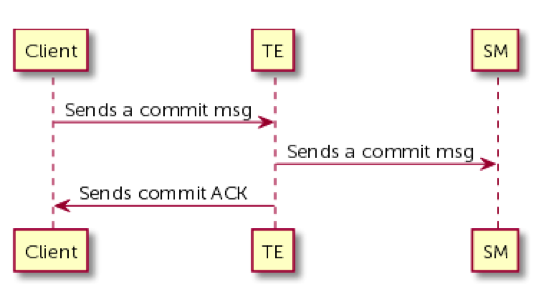 the most reliable commit protocol is called region:n commit. if you want to guarantee data durability across the regions then you should set up your tes and sms using region:n with journalling configuration (by using the -- commit  region:n  and -- journal enable flags in nuodb.config). the drawback of this type of the commit protocols is that this is the most expensive commit protocol.

as with any distributed system or other database such as , mysql, sql server, postgresql or oracle to provision a standard nuodb database configuration can be laborious; with nuodb, the system/database administrator needs to start an agent on all the machines that are to be provisioned to run nuodb, then he needs to launch a management console (either command line or web-based), where he can initiate the required storage manager and transaction engine processes. in case of a basic, high-availability configuration it requires at least two agents, two storage managers and two transaction engines.

in nuodb 2.0 there is an automation functionality that makes nuodb an excellent choice to fulfill easy-to-deploy distributed database requirements.  besides helping the initial deployments, automation is also a great choice to support scale-out operations or to enforce minimal process requirements.  automation is host- and region-aware such that databases can expand automatically when a host joins an existing region in a nuodb domain, or when a new region joins the domain. the solution is based on the rest api and a predefined set of templates. nuodb 2.0/2.0.1/2.0.2 installs the rest service and the automation console but disables it by default.

in our example we will use the gzipped tar installation package to install nuodb 2.0.1. (of course, you can use 2.0.2 in case you have already downloaded and installed the latest version of the product.) we also need to create the appropriate production-archive directory (under /var/opt/nuodb in this case).

in order to activate automation, we need to run a script called run-auto-console.sh with –bootstrap flag. note that this needs to run only once per domain and on only one of the broker hosts.

nuodb agents and brokers internally use an admin database (“nuodb_system”) to coordinate enforcement of database requirements based on domain events (such as host joining a domain) as well as storing database-processing metrics. this database is created as part of the bootstrap operation. the database cannot yet be managed via the automation console, but can be seen from the web admin console (http://localhost:8080/console.html) or from the administrative command line interface.

once we have logged in (the default username is domain, password is bird), we can then navigate to templates menu.

the definition of the templates is as follows:

after clicking on the launch db instance button, a configuration menu will be shown. we can then define the database name, the dba username and password and select one of the available templates. in this particular example we use single host.

the single host template will define a nuodb server (storage manager and transaction engine) on one machine (in this particular example it is localhost.localdomain with default region running  on a single laptop).

once we submit the request, the rest api will interpret it and the defined configuration will be launched.  after a couple of seconds our testdb will appear with running status.

basic management functionalities such as delete, stop, and edit are available via the ui. by clicking on the database name (testdb in this example), we will see that one storage manager and one transaction engine have been started on the defined host:

scaling out with nuodb automation console

we can also use the automation console to support scale-out functionality. the example below will demonstrate how to set up a minimally redundant solution using aws ec2 nodes. prior to using the automation console, we need to install nuodb on the two machines. we then need to configure the peers in default.properties file to point to the other broker.

after that we need to run the script run-auto-console.sh with –bootstrap on one and on only one machine in the domain to create nuodb_system database. then we can login to the automation console using the appropriate aws url and credentials (http://ec2-hostname.compute.amazonaws.com:8888/, default username and password are domain and bird).

now we can start up our single host node on an aws ec2 machine using the same single host template as before. this time the host machine is ip-10-229-57-25 with default region.

once our testdb is up and running, we can click on the edit database menu and choose the minimally redundant template as shown below:

after clicking on the submit button the server will start running another transaction engine (te) and storage manager (sm) on host ip-10-229-57-25, thus we will have 1 region, 2 hosts and 4 processes running.

the host configuration for our database will be as follows:

the nuodb 2.0.x automation console can also be used to configure geo-distributed databases. the steps in the example below are similar as in the previous example; we need to install nuodb on the required servers then configure the regions in the default.properties file for the broker and agents. for brokers we also need to define the peers from other regions, in a way similar to the minimal redundancy configuration:

now we can launch a database with the geo-distributed template:

as a result we will have two separate regions (region_a and region_b) running on one host each:

as we could see, nuodb automation offers an easy-to-use database-provisioning interface for  administrators; they can use a web console to start up different database configurations with the help of just a few clicks. the provided templates can also be modified to tailor them to the requirements.

the other great feature in the newest nuodb release is the support for stored procedures. traditionally, stored procedures in the rdbms world offer a way to support complex logic within the database and thus avoid costly communications between the application layer and the database engine that could otherwise require a vast amount of data to be transferred between them in order to support similar functionalities. the closer we put the logic to the database, potentially the more performant application we could build.

nuodb syntax for creating stored procedures is similar to the traditional sql syntax. below is an example. first we create a stock table:

then we can load a stock data file into this stock table using nuoloader:

now we can define a stored procedure that will return the minimum, maximum and average stock volumes within a given period of time (defined by start date and end date parameters):

in order to validate our stored procedure we can define a few test procedures:

if we want to execute the stored procedure that we just defined above from a java application then we can use the following code example:

the notion is that we need to define a callablestatement for nuodb that will execute the required stored procedures. we can specify in, inout or out parameters or we can also return a resultset. the database connection is based on nuodb’s jdbc driver provided in the standard nuodb installation package.

we can then just create a very basic build script to compile and run the application:

then we need to compile our code and create a .jar file as follows:

in order to deploy our java stored procedure we need to execute the following statements:

now we are ready to test our external java stored procedure:

the new version of nuodb is moving to a very exciting direction where this distributed sql database solution can make a real difference. geo-distribution can offer higher availability for businesses by supporting databases running across multiple regional data centers and can offer applications better performance by serving database queries from a geographically close data center. the automation functionality offers an easy, cloud-friendly provisioning interface to automate database creation based on templates, while nuodb sql and java stored procedures provide an excellent choice for developers to implement their logic within the database and avoid unnecessary data transfer between the application layer and the database engine.