nearly two years ago (time flies), when java ee 6 came out, i wrote a post about application servers where i did some micro benchmarking (basically, startup time). i had plenty of comments and recently i had many people asking for some updates. witht java ee 6 booming, with some cloud vendors moving to java ee 6 , it was time to update this microbenchmark and focus on java ee 6 application servers. btw, if you want to know what java ee 6 is, you can check the slides of a presentation i gave a few times.

same disclaimer as last time : this is not a real benchmark ! so i’ll copy paste the paragraph i wrote last time :

in this test i’m just concerned about the usability of an application server for a developer. the idea is to download it, install it, start it and take some measurements : size of download, ease of installation, size of disk, startup time, size of ram.. . that’s all. no deployment of an application, no fancy twists to gain performance… because some of these application servers are resource consuming, i’m doing all my tests on a windows xp sp3 virtual machine (running on virtual box 4.1). it is a fresh install of windows xp sp3 with 1gb of ram and not too many software installed. so when i boot there are 27 processes running and using 230 mb of ram (leaving 770 mb free). virtualizing can be slower, so keep in mind that startup time can be a bit faster that what i’m giving you here. i use jdk 1.6.0_27 (when it’s not bundled with the server). no optimization at all is made (i haven’t twisted the jvm, or antyhing application server parameter, everything comes out of the box).

to calculate the startup time, i don’t do any fancy rocket science either. i just start the server a few times, check how long it takes and use the best startup time . also remember that some servers do not load any container at startup, making them very fast to start. that’s why i first trigger the web admin console (when there’s one) so i’m sure at least one web application is deployed (i did a print screen of the admin console when there’s one). then i just stop and start the server a few times and get the best startup time (by reading the logs). to calculate the memory footprint, i just use the windows task manager and check the size of the java.exe process.

resin 4 was one of the first web server (such as jetty or tomcat) to move to the web profile 1.0. for me it’s the success story that confirmed that profiles in java ee were needed. it’s really difficult to go from a web server to a full java ee 6 application server (remember that there’s still entity cmps in ee 6) but much easier to implement the web profile. resin is very cdi centric and based on the caucho implementation called candi .

it looks like jboss 7 is, finally, a nice millésime. for those of you who waited so long for jboss 5 to get certified and then didn’t see any jboss 6, jboss 7 is what you need with a fantastic startup time compared to the older versions (in my previous benchmard jboss 5 was the slowest app servers, slower than websphere 7). another novelty is an admin console (sexier than the good old jmx console).

like resin, apache tomee is the perfect success story for the web profile. tomee is no more than tomcat + openwebbeans + openejb + openjpa + myfaces + other bits. it really shows that java ee is a jigsaw puzzle where you can take open standards, bundle them together and become a certified web profile application server.

(*) looks like to be able to log on to the admin console, you need to change the %tomcat_home%\conf\tomcat-users.xml configuration files and add a manager-script role to a user. but i couldn’t make it work .

geronimo is not already java ee 6 ceritified (still in miletone 1). geronimo comes in 2 flavours, one with jetty the other one with tomcat. and like tomee, geronimo bundles several open source implementations of java ee.

siwpas (simple web profile application server) is quite new compared to the good old application servers. but like most of them, it embeds well known open source stacks, most from apache  (tomcat, openejb, openwebbeans, myfaces, openjpa, apache beanvalidation). it’s open source but you’ll still need a 30 days trial license to startup the enterprise version of the server.

websphere 8 is the java ee 6 application server of ibm. like the previous versions, you need a big bandwith to download one gigabyte of modules that get installed in nearly 2 hours. i noticed that there is a developer edition but once installed it looks like the 2.2 gb of the full server (i might got lost in the maze of the ibm website). there is also a community edition and it looks like it’s based on geronimo (and the executable to install it is also 116 mb). ibm, please, make it simple.

thanks to @sebsto i found a gem : it looks like ibm is working on a version was 8.5 alpha that would look like the other app servers (light and easy to install). i’ll stay tuned on this one.

a bit unknown but in version 7.0 (so it shows this application server has been around for long time), jeus 7 from tmaxsoft was a bit difficult to startup (create an account on the web site, download, install, run a wizard and read the readme.txt to make it started). then i discovered that there is no jeus 7 for windows so i downloaded the linux version and installed it on ubuntu (so the results of the microbenchmark are not very accurate compare to the other made on windows).

i couldn’t even find where to click and download the server , so if anybody knows, i’ll be ready to give it a try.

where the hell is tomcat ?

tomcat 7 is not a java ee 6 application server nor does it implement the web profile 1.0. it is just a servlet 3.0 container, so it’s shouldn’t appear in this blog post. but, everybody likes tomcat, everybody feels tomcat is way much faster than any server on earth (even faster than neutrinos or maybe not ). so i had to put it in this benchmark just to be a source of comparaison. and, indeed, tomcat is the fastest application server of the list (3 times faster than glassfish or 4 times faster than jboss). but it only does servlet 3 while the others implement between 12 (web profile) or 28 (java ee 6) specifications.

as a summary i will show you two graphs with startup time and resource consumption so it’s easier to compare.

when you are a developer, startup up time matters (it doesn’t when you are in production). thanks to tools like jrebel or the hot deployment of our ides, we tend to restart our app servers less and less. but, sometimes it happens (permgens, classpath mess up, memory leaks, refreshing app server cache…). i didn’t put was 8 nor jeus 7 in the graph below because they would just break the scale (42 and 23 seconds). it’s interesting to notice that 4 app servers (resin, glassfish, jboss and tomee) start in less that 5 seconds (jonas & geronimo are still in milestone). resin is 3 times slower than tomcat, but again, it comes with the web profile. 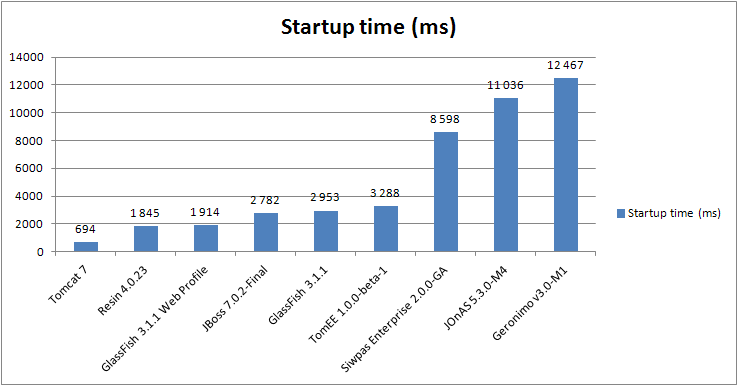 size once installed on the drive & size of process in ram

the size of the application installed on your disk is not very accurate : some app servers come with documentation, samples… others no. but still, that gives you an overview of how big an app server can be (again, i couldn’t put was in this diagram as it will break the scale with its 2.2 gb). the memory consumption is more interesting. without any jvm or server twists, when you startup, they nearly all take less that 100mb of ram (see how close tomee, glassfish, jboss and siwpas are). 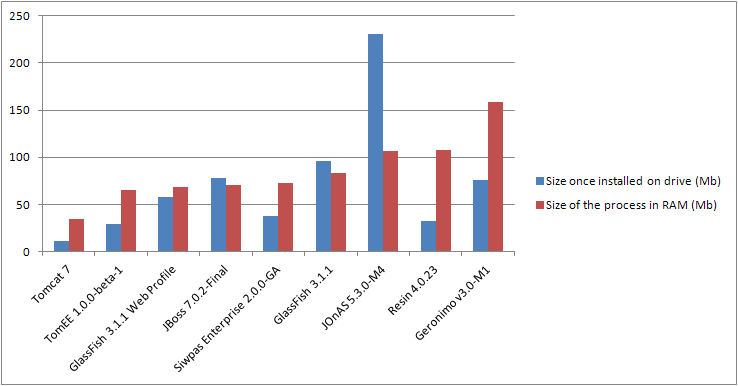 first of all, as you can see there is no weblogic. unfortunatelly weblogic is the last big player to be certified java ee 6. i don’t know the roadmap, hopefully i’ll soon be able to update this blog entry with the latest version of weblogic. second, this is not a real benchmark : i didn’t deploy any application nor i did some stress tests. one task i would like to do is to deploy a java ee 6 application on all these servers and see how portable the code is. but that’s for another blog.

what did i want to show in this blog ? well, that application servers have changed . except for was, weblogic or jeus, all the others are fast at startup and take few resources (memory).

and why did i want to show this ? because i’m fed up to still hear in 2011 : “tomcat is light, java ee app servers are not”. as you can see, in terms of startup and memory, the gap between tomcat and resin, glassfish or jboss is really small .

how is it going to affect your development life ? do you remember when 7/8 years ago we had to mock our database accesses because we didn’t want to install a fat oracle database on our laptop ? these days are over now because we use in-memory databases such as h2 or derby . same thing is happening with application servers : soon app servers will be running in memory and we won’t be mocking anything. we will fire a test case, app servers and databases in memory, and that’s it. and with tools like arquilian , it looks like this future is already happening.