A forest is a complex ecosystem of plants, animals microorganisms, non-living material, all balanced delicately by nature. It requires the right geography, the right soil, the right amount of rain and sun, and decades to build a forest.

So is open source. An open source project is a delicate ecosystem of contributors, reviewer, users, supporting organizations, all balanced by a feeling of a community. It requires the right ideas at the right time, the right group of developers, the right technology, an enormous amount of dedication and passion, and years to build a project.

Forests are home to many species, the source of oxygen, clean water, and air, prevent floods block winds, source of wood when used in a sustainable manner. Forests offer endless benefits to many when consumed responsibly and without destroying it completely.

In the late 1960s, the deforestation of the Amazon (not the company, but the rainforest) started at an enormous rate. Trees were cleared and land was transformed. The delicately balanced rain forests were destroyed, irrevocably leading to varying degrees of erosion, landslides, climate change, and even changing the patterns of weather. And some companies captured enormous value from destroying the commons of nature by cutting the trees for wood and fuel in an unsustainable manner. 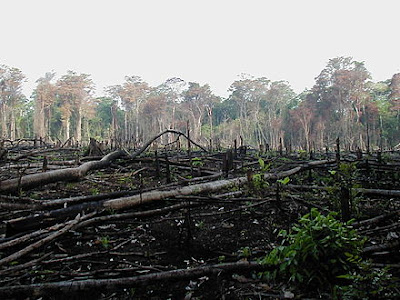 Tragedy of the commons image by Wikipedia

On one hand, there are the small companies employing open source developers to build and maintain open source projects and become de facto consultancy and tooling providers around that technology. The open source model helps attract customers for the small businesses and they contribute back their work in return. It is a win-win for free riders, paying customers, maintainers, and so open source projects continue getting wider adoption.

But enterprise customers don't want consultancy or tooling, they want to use technology in a fast, scalable, reliable, and secure way and focus their resources on the business domain instead. And this is what cloud services offer. If that premise is true, any widespread open source technology will eventually be wrapped as a cloud service, and companies will prefer to use it there rather than running themselves in-house with the help of consultancy or proprietary automation tools.

That leaves small companies benefiting from and contributing to open source, out of business. As Thomas Dinsmore said it on Twitter "It's impossible to argue that software should be open AND the originators have the sole right to monetize. If you believe in the latter, the solution is commercial software. With a license key." Any company benefiting from the open source model is also accepting the risk of being eaten by a large cloud service provider eventually. These are the rules of the open source game, and they are fair.

That makes the future of these open source project unclear. When technology is offered as a cloud service, the smaller companies start protecting their investments by introducing additional licenses and moving away from being truly open source. We have seen that with Redis, MongoDB, Kafka, and others to follow eventually. That also means the small companies will have less incentive to develop the open source project beyond the open core elements and instead will focus more effort on their non-open source value-adding competitive edges.

As for the cloud providers, they are not obliged to sustain open source by license, not forced by their business model either. If a project stagnates, loses contributors and users, a cloud provider could, quicker than anybody, jump into the next popular project and offer that as a service. That is likely to lead to a change of dynamics of contributors from small and mid-range companies to individuals (as these early indications around Redis) or new activity on the open source arena cloud providers. This is a new reality, and we are yet to see how open source adapts to it.

The mightiest corporations of our times capture enormous value by using the commons of the open source community, by wrapping the projects into services and offering them for the cost of hardware usage. While benefiting from open source unconditionally and without any expectations is perfectly fine according to the license agreements and the rules of capitalism, benefiting without contributing back a fair share, nor helping for sustainability, has the effects of deforestation of the ecosystem. In the absence of a sustainable model, the delicate balance of contributors and users can be easily broken, leading to confusion, fear, license changes, leading to multi-license projects, leading to discouraged contributors, leading to cautious users, changing the open source model as we all know it, irreversibly.

The good news is that the software industry is increasingly getting more educated on understanding how open source works, what it takes to produce, and sustain it. With recent reactions on social media, we can see that there is no legal, but moral expectation from the companies benefitting from open source most, to play their equal part in sustaining the same open source by being exemplary with their actions, and not only exploit the commons the other contributors are building and the whole society is relying upon.