A story recently showed up on Slashdot outlining that the TSA had paid $1.4 million USD for a randomizer app that determines whether a passenger should "left" or "right". 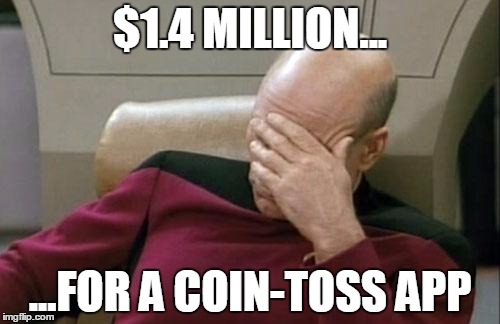 In fairness, the article concedes that the actual iPad-based app cost $336 413.59 USD; how the balance was spent has not yet been clarified, although the same article also concedes that the hardware procurement and training might have come included in the $1.4 million price tag (not that that makes any sense, either).

Now, try as we might with controls and other processes in place to make estimating more accurate, producing quotes to develop software is still an inexact science.  That said, let's have a look at a couple numbers.

Assuming somewhere towards the middle, say, $150/hour, that is just north of 2 240 hours' worth of work done to create a simple "left or right" iPad app.

If we assume the upper-end of the price spectrum (which is highway robbery in and of itself for that kind of development), at $250/hour, that's still 1346 hours' of development time, or nearly 8.5 business months.

Given that IBM won the contract, these are not unreasonable conjectures.

I don't think I'm going out on a limb here in saying that most any developer would be able to confidently release such an application inside of a month, including necessary polish.  Why the extra time?  Well, at this point all we can do is speculate, but I leave it to the reader to draw his/her own conclusions.

This story also highlights the need for accountability in any kind of public-sector procurement, but especially software where price ranges are wide and varied.  And, if indeed RFPs were used to garner this contract, then other, larger questions of oversight are raised.

Would you pay hundreds of thousands of dollars for this app?  How long would it have taken you to develop and release?