In our data warehouse system, approximately 12,000 jobs must run every day. These jobs may have some constraints such as starting time and predecessors (See Figure 1). Some jobs may have crashed due to data quality, connection, and system issues. More importantly, due to a lot of jobs being created every week, optimization is necessary. For this reason, our study is trying to minimize the total duration of jobs to be scheduled (makespan time). This problem is a version of a job shop scheduling problem. The objective of this problem (job shop scheduling) is to schedule jobs to parallel machines minimizing the total duration of jobs (makespan time) while noticing the constraints and using the average times.

This problem is comprised of a set of jobs (J) and a set of machines (M). Each job has only one operation. Some jobs have one or more predecessors. This means that it has to wait until the dependent jobs execute successfully. Another constraint is starting time. The job that has the starting time constraint has to wait until their starting time passes (see Table 1). All jobs have to be executed at the end of the plan. Each machine can only be executed one job at the same time.

Figure 1: The portion of a job’s predecessors.

We focus on two of the metaheuristic algorithms, Variable Neighborhood Search (VNS) and Genetic Algorithm (GA). VNS contains a multiple neighborhood structure. Its basic idea is changing the neighborhood structure systematically within a local search so that the search isn’t trapped on a local minimum. GAs uses the basic Darwinian mechanism of survival of the fittest and utilizes information in the solution population to generate new solutions with better performance.

There are J piece of jobs to be scheduled and M set of machines. Schedules are represented in a job name. They store in a database table (see Table 1). Each job has one row in the table and their predecessors are in the predecessor’s column with a comma-separated list once they are preprocessed to split the list and find all dependent jobs backward (See Table 3).

Figure 2: The pseudo-code of the initial solution’s algorithm.

Let's focus on minimizing the fitness function (the total duration of jobs in makespan time), which can be formulated in Equation 1.

Although there other efficient neighborhood structures reported in the literature, we preferred this method to the simplicity and ease of use.

The VNS algorithm gets an initial solution on the whole set of search space. After that, it manipulates in which core it changes and searches via two main functions called shake and local search. Local search explores an improved solution within the local neighborhood, while shake diversifies the solution by switching to another local neighborhood. We used the classical VNS algorithm. It consists of the following steps:

The proposed GA used permutation representation. It’s described as a set of permutation solutions where the individual is a result of the population. For each parent, the initial solution is run using these jobs. Each job is labeled as the job name. The solution is calculated using these names. For instance, let assume there are four jobs: A, B, C, D. The one solution may be “A-B-C-D.”

We don’t use crossover because most of the jobs have predecessors or starting times. If there will be any crossover, then each starting time must be computed and each predecessor must be checked. If it doesn’t comply with the constraints, crossover can’t be applied. It doesn’t comply with the constraints most of the time. However, swap mutation is applied. It selects two random jobs. If it’s suitable to swap due to constraints, swap the range; otherwise, do nothing.

The optimization algorithms are implemented in Structured Query Language (SQL) and Procedural Language/Structured Query Language (PLSQL) and are tested. Experimentation is performed on an Oracle Exadata V2 and the Oracle 11g database. The problem is run 20 times. The stopping condition is 100 iterations for VNS and 100 generations for GA. Parameter settings are shown in Table 6. Results are based on computational time (CPU), average fitness function (minimum of makespan time), and the standard deviation of the fitness function and T-test (see Tables 7-8 and Figures 3-4). Since the optimal solution of this problem is unknown, the average relative percentage error (ARPE) and relative percentage error (RPE) can’t be computed. 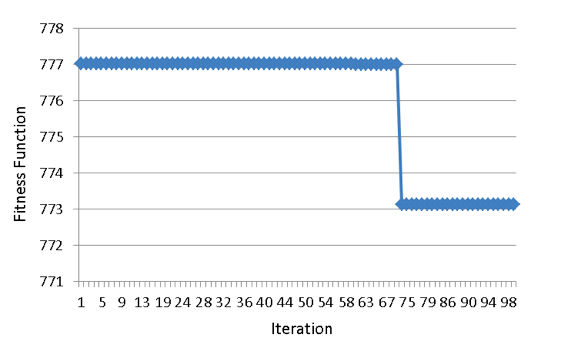 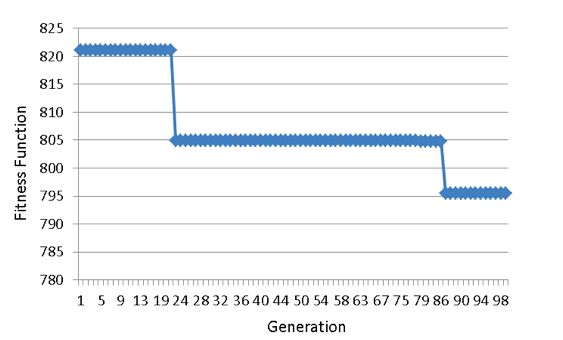 We examined the VNS algorithm and GA for a job shop scheduling problem with dependency and starting time constraints. It has been shown that the VNS and GA implementations have done well. GA is using less CPU time than VNS, so it’s indicated that GA is faster than VNS for this implementation. For the average case, VNS is better than GA, but GA reduces the fitness function lower than VNS does.