Now it’s official. It might come to some as no surprise due to the long history of delays in the project, but looks like the highly anticipated Project Jigsaw has been delayed. Again. The good news is that unlike last time with Java 8, it’s still on the roadmap for Java 9. The bad news is that we’ll have to wait to 2017. Originally targeting September 2016, the target date for general availability is now set to March 2017.

Project Jigsaw’s goal is to make Java modular and break the JRE to interoperable components. Once it’s finished, it would allow creating a scaled down runtime Jar (rt.jar) customised to the components a project actually needs. The JDK 7 and JDK 8 rt.jars have about 20,000 classes that are part of the JDK even if many of them aren’t really being used in a specific environment. The motivation behind this is to make Java easily scalable to small computing devices, improve security and performance, and mainly make it easier for developers to construct and maintain libraries.

A few months ago in JavaOne Oracle produced a series of deep dive and introductory talks around Project Jigsaw, generating a lot of discussions in the community. In his schedule change announcement, Mark Reinhold, the Chief Architect of the Java Platform Group at Oracle, says:

“The volume of interest and the high quality of the feedback received over the last two months suggests that there will be much more to come, and we want to ensure that the maintainers of the essential build tools and IDEs have adequate time to design and implement good support for modular development.”

Project Jigsaw – A History of Delays

There’s a legend saying that every time someone mentions Project Jigsaw, it’s delayed by one month. All the gamers out there must feel the same way about Half Life 3. Ouch. It’s not the first time the project has been delayed, it was also targeting Java 8. On the previous delay, the responses were quite similar to this one. The main concern of the community is that Project Jigsaw will be released when it’s fully complete and working perfectly, rather than released early and rough around the edges. The target of a 2 year Java release cycle turned out to be too optimistic.

When asked if the current 6 months delay is enough to ensure Jigsaw’s release in Java 9, Mark Reinhold replied: 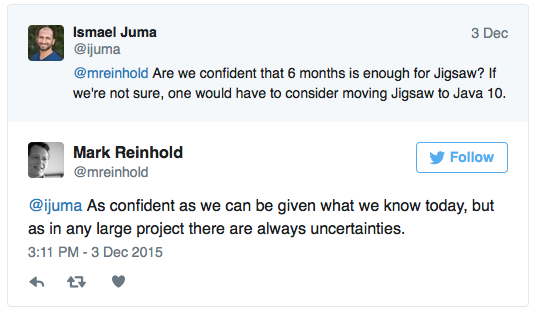 Martijn Verburg, jClarity’s CEO and co-lead of the London Java Community, expresses the general sentiment towards the delay: 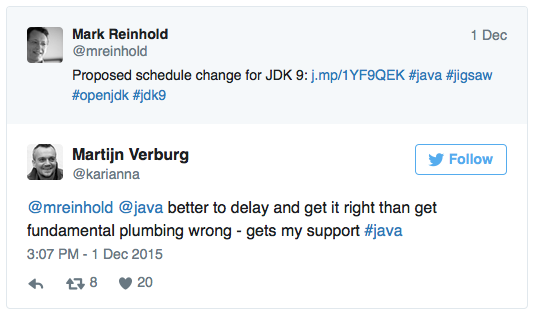 Although there are also some developers who would rather see Java 9 released on schedule, even if it means Project Jigsaw wouldn’t be completed on time.

Can’t wait for Java 9 and Project Jigsaw? Join the countdown on java9countdown.xyz

Takipi’s Java 9 countdown in now updated with the new dates. Just when we got under 300 days!