On October 30, Amazon announced that both OpenJDK 8 and OpenJDK 11 will continue their long-term support for Amazon Linux until June 30, 2023.

Since the announcement that Oracle will no longer provide long-term support for the OpenJDK beginning January 2019, this has sparked a lot of interest in the Java community over support for Amazon Web Services. Oracle and Amazon wanted to reassure devs that OpenJDK 8 and OpenJDK 11 LTS will continue for Amazon Linux until mid-2023.

According to Amazon's website, "Amazon Linux users will not need to make any changes to get support for OpenJDK 8. OpenJDK 11 will be made available through the Amazon Linux 2 repositories at a future date."

This reaffirmation prompted most developers to express excitement and relief over the continued support: 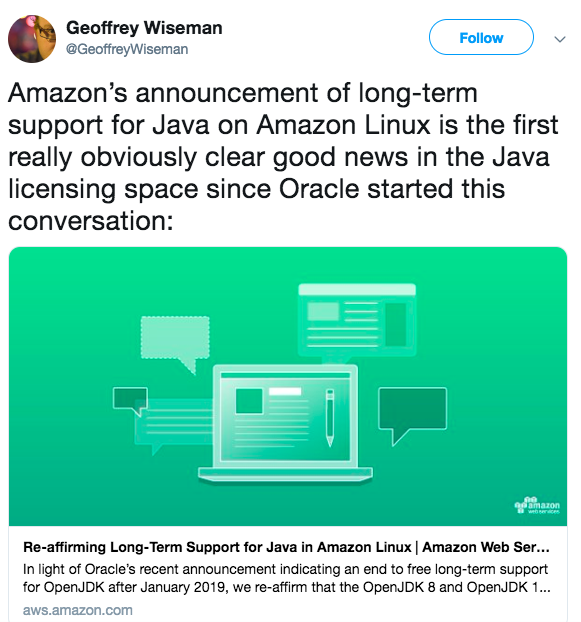 However, some developers showed distaste for the move by both Amazon and Oracle.

In a Hacker News comments forum, ilovecaching said, "It’s hard to decide what I hate more about Java, the language or the enterprise mediocrity and corporate/enterprise-licensed crapware that pervades the ecosystem." ilovecaching went on to say:

It’s no surprise Amazon will carry the torch for OpenJDK, their internal culture perfectly fits the Java mindset, as does Oracles.

To learn more about the continued support for AWS and Amazon Linux, check out Amazon's Compute Blog!