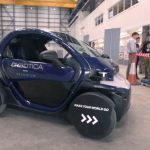 the transition to a driverless world is something i’ve touched on a few times over the past year. for instance, it seems likely that there will be a period where the car is capable of doing a growing number of tasks, and a study explored how we can safely transfer control of a vehicle between man and machine (and vice versa).

a number of startups are also exploring how we can transition existing vehicles into driverless ones. for instance, i wrote recently about otto , which was founded by a group of ex-google employees to do just that. the technology turns a traditional commercial truck into a self-driving vehicle, with the company recently announcing successful test drives of the new package.

another company doing a similar thing is the oxford university spin-out, oxbotica .  they’ve developed a system, called selenium, that is capable of pulling in data from scanners and cameras before then calculating its position on the basis of this data.  the researchers believe that it’s capable of turning any vehicle into a driverless one.

the system first attempts to acquire knowledge from the car as it drives around, whilst also absorbing the behavior of the driver themselves so as to know how to respond in certain circumstances. it then reaches a tipping point at which stage the team believes it will be smart enough to drive itself.

the system uses a combination of data collected on the fly with data stored from previous journeys to try and figure out how to behave in a particular circumstance.  so, for instance, the cars first drive in rainy conditions will give it ‘experience’ that can be called upon in subsequent wet journeys.

the system is due to be put through its paces in both greenwich, london and milton keynes, although it’s probably fair to say that the technology is a little way off being a presence in a vehicle near you.

it seems likely that this kind of technology will be crucial in ensuring that the existing vehicle stock isn’t mothballed once driverless technology becomes a viable proposition, and so it will be fascinating to follow both oxbotica and otto as they continue their journey.

check out the video below to see the oxbotica system in action.