CPack is a powerful, easy to use, cross-platform software packaging tool distributed with CMake since version 2.4.2. It helps create binary package and source code package. The following figure shows where CPack locates in the whole CMake tool chain.

The one-click installation package facilitates the deployment and usage of your software in production so that you can concentrate on your work rather than the software itself.

CPack can be used by specifying a CPackConfig.cmake file without CMake or as a module of CMake.  As a built-in tool for CMake, CPack supports to generate the binary installer in multiple formats and is easy to use. You can just configure it in the CMakeLists.txt file.

How to Install CPack

CPack is installed along with CMake or you can install it separately via yum or apt-get.

The rpm files are very similar to deb files and their differences lie mainly in configurations. Here we use rpm packages as an example. CPack packages rpm with the CPack RPM generator. All the configurations used are prefixed with CPACK_RPM. The rpm-build tool is used to build the package, so make sure it has already been installed. You can install rpm-build via sudo yum install -y rpm-build. In our example, we’re using CMake 3.14.5.

The following is the structure of our sample project:

Add the following configurations to the example/CMakeLists.txt file.

When the cmake command is run, two new files will be generated in the current directory: CPackConfig.cmake and CPackSourceConfig.cmake. When compilation is completed, run cpack -G RPM to pack the files into an rpm package. You will find a new directory _CPack_Packages and a file with .rpm extension example-1.0.0-Linux.rpm is generated in the current directory. The installation package file is named example-1.0.0-Linux.rpm, which is the target package.

If you want to check detailed outputs when packing, add --verbose behind the cpack -G RPM command. CPack generates the _CPack_Packages/Linux/RPM/SPECS/example.spec file which is used to build the rpm based on the customer configuration.

The installation package example-1.0.0-Linux.rpm generated by the above configuration contains the following files:

Note: if there is a conflict during the installation like this file /home from install of example-1.0.0-1.x86_64 conflicts with file from package filesystem-3.2-25.el7.x86_64, add the following configurations to exclude /home and /home/vesoft in the generated rpm file.

You can embed a pre/post (un)installation script in the spec file:

Add the following configurations in the above CMakeLists.txt file:

Note: The above four scripts require execute permissions for all users and user groups. You can change the file permissions under the script directory with chmod 755 scripts/* after creating the scripts.

The green and red words in the pictures are the printouts of the pre/post (un)installation scrip, which indicates they are executed as expected or not.

The above configuration packs all the files to a single installation package. However, often a project contains multiple services which will be deployed on different machines. In this case, you don’t want to pack all of them into one package because this will make the package too large in size. At this time, you need the CPack components.

Add a definition for the install function:

Add a definition for the cpack_add_component function:

Add a definition for the cpack_add_component_group function:

Then modify src/CMakeLists.txt, as show below, the config the COMPONENT option of installation rules of program A and B to AComponent and BComponent 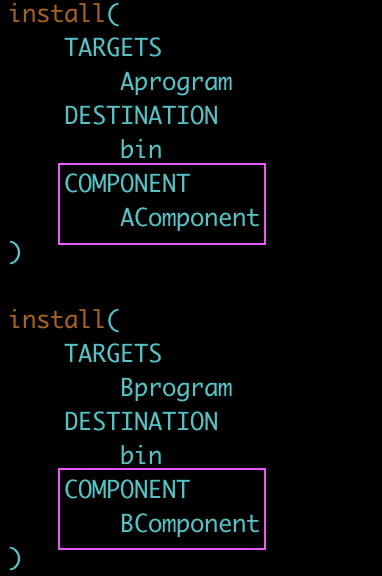 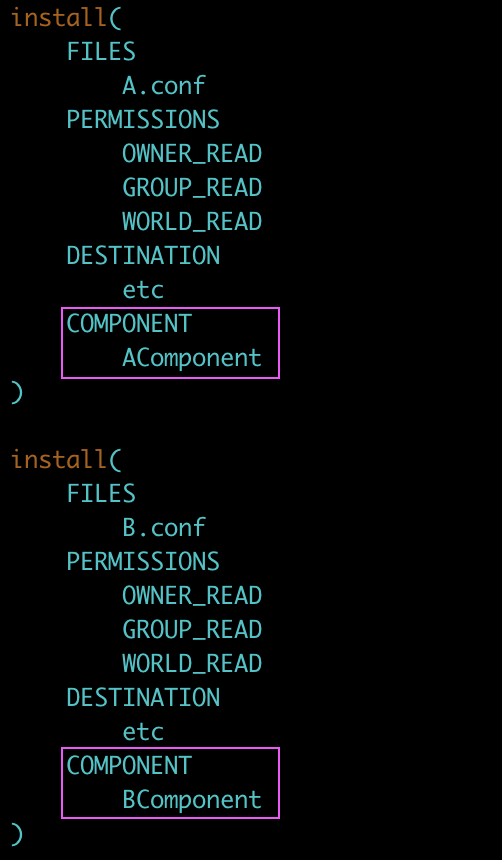 The relocatable RPM can be installed using:

You can use CPACK_RPM_SPEC_MORE_DEFINE option to add any %define lines to the generated spec file.

There are many parameters for CPack. And parameters in different versions may vary. Please refer to the CPack Site for details or use CPack --help for more information.

We use CPack to pack rpm and deb packages for Nebula Graph. Click here to get packages of each release version.