Running Packet Radio apps in a Docker container on a Raspberry Pi? "Are you mad," I hear you ask? Isn’t it hard enough to get ax25 and Packet Radio up and running on the Pi anyway? Having done this a few times already, this was my thinking, and I had the crazy idea that encapsulating most of the config and setup in Dockerfiles to build preconfigured containers might be an idea worth exploring.

Installing and configuring ax25 for the Raspberry Pi and Winlink clients that use ax25 like paclink-unix or Pat can be done and work well, but the steps, as, for example, documented in this comprehensive guide for building and installing paclink-unix that span several pages of instructions, can be daunting even for those more familiar with building and installing apps from source on Linux.

Since the steps are well documented, I wondered if they could be captured in a Dockerfile to automate building a self-contained and ready-to-run Docker container.

I did eventually did get this working, building ax25 from source and using Pat, but it took me down a rabbit hole for several hours. Skip to the end if you just want to find out how to build and run the completed Docker containers.

I could not get ax25 to work self-contained in its own Docker container, as I ran into issues either accessing my serial device connected to my TNC Pi from inside the container and/or creating an ax0 interface when running kissattach.

If you expose the serial port on the Raspberry Pi to the Container running paclink-unix:

…When trying kissattach in the container, it gives:

I was initially trying to get this working because I wanted to run paclink-unix for Winlink email. Part of this app, when you run the make script, will create wl2kserial and wl2ktelnet, but not wl2kax25. I had already run into this before, as it seems it doesn’t compile unless it has a later version of the ax25 stack compiled from source.

I changed gears and looked for how you could share an up-and-running ax25 stack from the Docker host, and it turns out this is easy to do, you just pass the –network=host param, and then ax0 appears in your network interfaces in your container.

The next issue I ran into is that configuring postfix, as your email transport take some effort. Bazaudi.com has a very detailed set of instructions, but I couldn’t get it working for outgoing email. It was working for incoming via wl2ktelnet and wl2kax25, but only for receiving emails and not sending. Time to try something else.

Installing and Configuring Pat in a Container

I tried to get Pat working once before — I think I had it working on either a Debian or Ubuntu box, but I couldn’t get it working on Raspbian on a Pi. I decided to try it again in this setup and, reusing the base image with ax25 already compiled from source, it was actually very easy to get Pat up and running.

This is dependent on having ax25 installed and configured on the host Pi OS, and shared to the container with –network=host. I know, this seems redundant, but this is the only way I managed to get this working.

My base image for Raspbian including ax25 built form source is here.

Next, build an image containing Pat, based on the image we just built. The source for this Dockerfile is here.

Build this image with:

Now, to start it up, remember we’re relying on an ax25 connection from the host, and we’re going to share it with the guest container. My TNC-Pi board connected to my Raspberry Pi is available on my serial device as /dev/ttyAMA0, so I start up my ax0 port like so:

Next, run the container as a daemon, share the host networking, and expose port 8080 so we can access the Pat web app:

Looks good! This is the Pat inbox. Let’s send a test email to myself – this is going to be sent using Packet over 2m VHF via my local Winlink gateway, AG6QO-10. I have this preconfigured in my Pat config file. You can configure this yourself before creating the rpi-wl-pat image:

Remember, the Pat web app that we’re interacting with here is running in a Docker container, on a Raspberry Pi. I just happen to be accessing it remotely from my Mac. For mobile operations or out in the field, you could attach a touchscreen to the Pi and connect a keyboard and mouse too.

To send my email over RF to the Winlink gateway, click Action, then Connect: 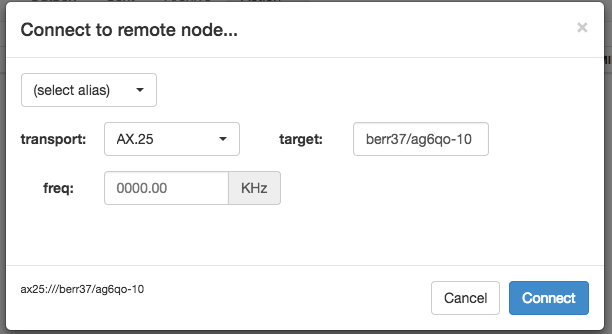 In the Pat status window, we now see a log of the Packet exchange between my station and AG6QO-10 via BERR37:

A few seconds later, the email arrives in my Gmail inbox:

If I reply to the email in Gmail, it will go back over the Winlink network, and be waiting for me when I connect to the Winlink gateway again over RF. Let’s give that a go in Pat – select Action and Connect, we connect to AG6QO0-10 again over 2m VHF, and now the reply is in my inbox in Pat: