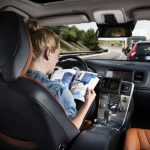 tesla made the news recently as one of their semi-autonomous vehicles was involved in the first recorded fatality involving such driverless technology.

while most car companies are predicting fully autonomous vehicles within the next decade, the intervening years are likely to see an increasing amount of driving taken care of by our cars themselves.

it’s in this fascinating sphere that a new paper was published recently. it explores a novel approach to this challenge of transferring control between the human driver and their autonomous vehicle.

their work, which has thus far been tested in a driving simulator, aims to help with the advancement of semi-autonomous systems that rely on the transfer of control between humans and machines.

they suggest that existing algorithms struggle to really model the chaos of the real world.  even in relatively stable environments, such as rail travel, automated systems still tend to require human assistance to deal with unexpected incidents like a branch on the track.

being able to transfer control between man and machine is therefore likely to be hugely important, and it’s a task that existing systems struggle with.

“paradoxically,” the authors explain, “as we introduce more autonomy, people become less engaged with the operation of the system and it becomes harder for them to take over control.”

the paper sees a theoretical framework developed that allows semi-autonomous vehicles to utilize a step-wise approach that takes advantage of two levels of reasoning:

should the human not do what is expected, the system is capable of stepping in, to stop the car for instance.

when the model has been tested, it performed well in a number of environments, with the authors claiming that it rendered the vehicle as never being under the control of an entity that wasn’t expecting it, nor was prepared to handle the situation they found themselves in.

the next step is to scale up testing in simulators before hopefully transferring it into real-life vehicles for further testing.  this is likely to be a crucial step in the development of driverless vehicles, and it will be fascinating to watch its progress.