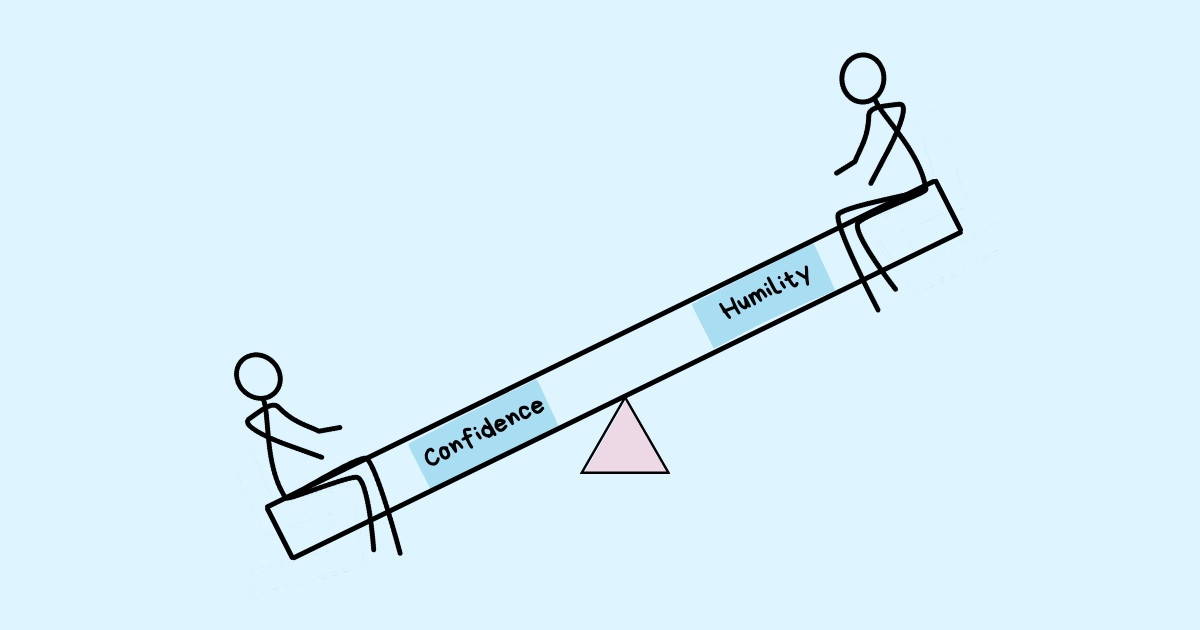 How do I balance myself on the confidence humility see-saw? What if my confidence is seen as arrogance or my humility as a sign of my lack of assertiveness. How do I come across right?

These thoughts just aren’t mine. Many females including those who are highly successful, and probably most men too struggle with this fine balance. We want to be like Goldilocks from the fairy tale Goldilocks And the Three Bears. Neither too much confidence and humility. Nor too less. Just the right amount.

Confidence and humility are often misunderstood though. What words come to mind when you think about confidence — power, authority, boldness, worthiness, self-assurance? How about humility — submissive, unassertive, passive, insecure?

Humility doesn’t translate into incompetence or lack of self-confidence. As C.S. Lewis puts it "It’s not thinking less of yourself, it’s thinking of yourself less." It means staying grounded, admitting that you don’t know everything, and accepting that you still have a lot to learn.

That is exactly what every leader needs — confident humility. Adam Grant describes it in Think Again as "having faith in our capability while appreciating that we may not have the right solution or even be addressing the right problem. That gives us enough doubt to reexamine our old knowledge and enough confidence to pursue new insights."

Confident humility is the confidence in a leader’s ability to make the right decision while acknowledging that they need others to do it right. It’s knowing what they don’t know and having trust in what they do. It’s having faith in their strengths, while also being aware of their weaknesses. It’s accepting that they don’t have the required knowledge, but enough confidence in their ability to acquire that knowledge.

A leader with confident humility isn’t devoid of blind spots. Rather they put measures in place to counter those blind spots.

Whitney Wolfe Herd is the world’s youngest self-made female billionaire and the perfect exemplar of confident humility. As co-founder and vice president of marketing at Tinder, she was already part of a great business success story. But that didn’t end quite so well for her.

After resigning from Tinder in 2014, she founded Bumble, a dating app. It was her confidence that guided her to compete against Tinder and her humility that allowed her to question the needs of the dating space. Her experience from Tinder was useful. But, what really played out in her success story was her ability to question that knowledge. She defied previous dating norms and decided to let women make the first move in the app. Even though 90% of dating startups fail, she carved out a lucrative space by focusing on the needs of one segment: women. "Let’s change thousands of years of behavior. Globally," she said.

Robert Iger, former CEO of Disney is another ideal example of confident humility. In The Ride of a Lifetime, he writes about how he felt when he first accepted the role to be the president of ABC entertainment. It was the first time in the history of the company that the person running ABC Entertainment wasn’t from the entertainment world. "It wasn’t quite leaping without a parachute, but it felt a lot like free fall at first. I told myself: You have a job. They’re expecting you to turn this business around. Your inexperience can’t be an excuse for failure."

He describes how confident humility looked like for someone like him who didn’t know much about the business at the time. He writes "So what do you do in a situation like that? The first rule is not to fake anything. You have to be humble, and you can’t pretend to be someone you’re not or to know something you don’t. You’re also in a position of leadership, though, so you can’t let humility prevent you from leading."

He adds "It’s a fine line, and something I preach today. You have to ask the questions you need to ask, admit without apology what you don’t understand, and do the work to learn what you need to learn as quickly as you can. There’s nothing less confidence-inspiring than a person faking knowledge they don’t possess. True authority and true leadership come from knowing who you are and not pretending to be anything else."

Katharine Graham who saved The Washington Post and transformed it into one of the leading newspapers in the United States is another example "She was gutsy, so many said, yet never trumpeted the fact. Her wealth and influence were great but wielded with grace. She changed the course of the nation, her city, and journalism, and in so doing knocked down walls for women. Few lives blend so many traits so seamlessly." Lou Gerstner who turned IBM’s fortune around by revitalizing the company and saving it from near bankruptcy in the mid-1990s is another paragon of confident humility.

They and hundreds of other leaders demonstrate that the biggest thing a confident leader can do is to show humility — stand back and make room for other people’s thoughts and ideas.

Why Confident Humility Is Rare 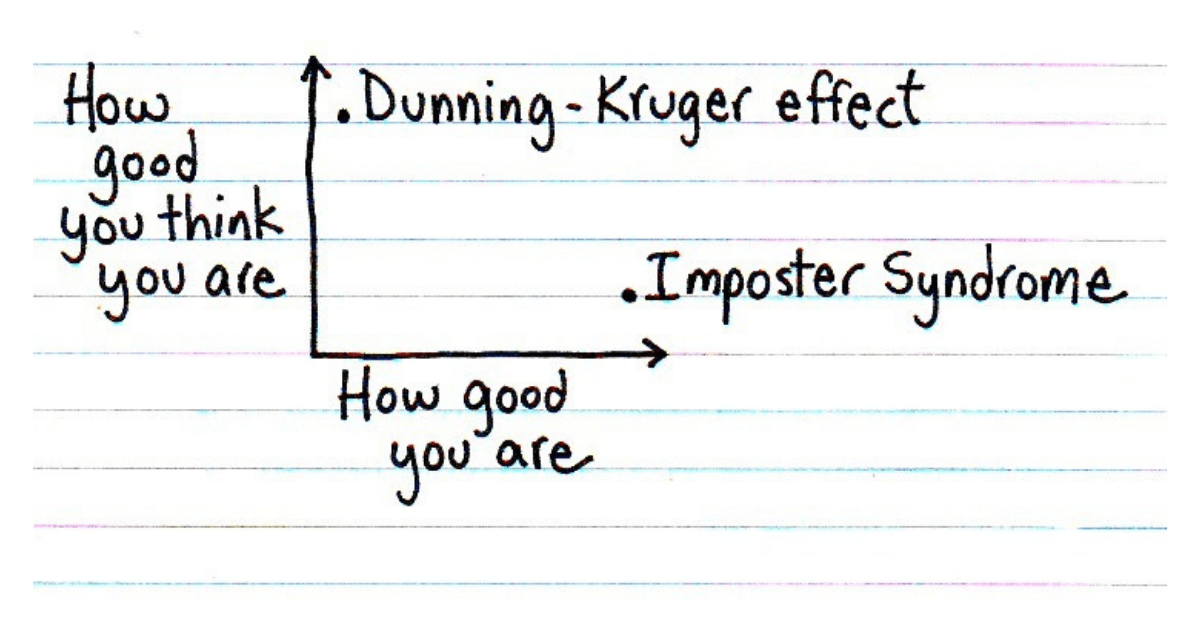 Most leaders either err on the side of overconfidence without competence or extremely competent without the confidence needed to put their ideas into action.

The first category — confidence over competence starts with an overconfidence cycle where leaders become ignorant of their own ignorance. A false sense of mastery promotes a strong conviction in their ideas and knowledge. They fail to notice gaps in what they know and refuse to identify what they don’t know. They are so eager to speak that they don’t stop to observe and listen. They are so blinded by their strengths, that they fail to see their weaknesses. They are so consumed in trying to be right that they fail to do the right thing. Driven by the desire to seem more competent, they become blind to their own incompetence — with just enough information, but not enough expertise. Never stopping, never listening, never asking. There’s no place for humility to step in.

Certainty is the biggest monster. Confidence in their knowledge gives them permission to pass judgment and dismiss information that does not match their beliefs as they feel absolutely certain about their decision. Why would they question their opinion or seek information that contradicts their viewpoint when they are certain of what they know. How can they ever identify the gaps in their knowledge unless they believe it can be flawed?

A sense of superiority and pride in their knowledge makes them less and less interested in learning and updating their beliefs. Dunning-Kruger effect further clouds their vision of their abilities — The less competent they are, the more they overestimate their abilities. The more they lack competence, the more they are likely to be brimming with overconfidence. Sort of a catch 22. Without the skills to spot their own mistakes, they can’t see where they are going wrong and therefore assume they are doing great.

Tim Urban, writer of Wait But Why blog describes arrogance as "ignorance plus conviction." This is exactly what these leaders demonstrate "an especially deadly combo because it prevents them from improving. It not only leaves them without real knowledge, but it also deprives them of the humility needed to gain real knowledge or grow into a better thinker. When they think they are already doing great, they feel like there’s no room left for improvement. While humility is a permeable filter that absorbs life experience and converts it into knowledge and wisdom, arrogance is a rubber shield that life experience simply bounces off of."

The second category — competence without confidence starts with a crippling sense of doubt where leaders wrestle with insecurity and constantly question their abilities. They feel like imposters — I don’t know what I am doing! I don’t deserve this position! I am not qualified to make this decision! Others will find out that I don’t have what it takes!

Feeling like an imposter gives them the humility to doubt their methods, question their knowledge, work harder on improving their skills, validate their assumptions, and seek insights from others. In their case, success breeds confidence. Once they achieve challenging goals, they start feeling confident. They may still engage in self-doubt. But, those doubts don’t make them weak, crush their motivation or hold them back from moving forward. Rather, what once signaled their lack of ability to succeed now serves as a cue to push ahead with greater conviction.

Engaging with the feeling of being an imposter in a healthy way turns their self-doubt into a medium for growth. Instead of ruminating and feeling helpless by these thoughts, they fuse them with optimistic adventures. Instead of waiting for the confidence to achieve their goals, they build their confidence by putting themselves out there. By facing their fears. Doing the work. Learning from their mistakes and trying just one more time. Stop. Listen. Act. Repeat.

"In a simpler world, perhaps unilateral power held by a single, smart, capable leader could rule the day. In a complex world, it takes a collective sharing of power, creativity, and perspectives to become agile and nuanced enough to lead into the uncertain future," says Jennifer Garvey Berger, in Simple Habits for Complex Times. In other words, today’s world demands a leader who exhibits confident humility.

A leader with confident humility:

Ending with this thought from Adam Grant which summarizes the importance of confident humility in leaders,

"Great thinkers don’t harbor doubts because they’re impostors. They maintain doubts because they know we’re all partially blind and they’re committed to improving their sight. They don’t boast about how much they know; they marvel at how little they understand. They’re aware that each answer raises new questions, and the quest for knowledge is never finished. A mark of lifelong learners is recognizing that they can learn something from everyone they meet. Arrogance leaves us blind to our weaknesses. Humility is a reflective lens: it helps us see them clearly. Confident humility is a corrective lens: it enables us to overcome those weaknesses."