You’ve heard it before: it’s time to get serious about security. Cyber threats aren’t slowing down, which means security must become a critical part of your job as a developer. But it’s not always easy to fix your code during or after release to production, especially when you have to stop and search for knowledge resources. That’s where secure coding best practices and fine-tuned training meet to set you up for success.

In part one of this two-part guide, we broke down best practices like parameterizing your queries to avoid SQL injection and encoding your data to address the three main classes of Cross-Site Scripting (XSS). For part two, we’re diving into five additional tips and best practices, from protecting data to leveraging existing frameworks securely.

Consider checking if the user has access to a feature in code, as opposed to checking what role the user is in code. Below is an example of hard-coding role checks.

Organizations have a duty to protect sensitive data within applications. To that end, you must encrypt critical data while it’s at rest and in transit. This includes financial transactions, web data, browser data, and information residing in mobile apps. Guidelines like the EU General Data Protection Regulation make data protection a serious compliance issue.

Logging should be used for more than just debugging and troubleshooting.  Logging and tracking security events and metrics help to enable what’s known as attack-driven defense, which considers the scenarios for real-world attacks against your system. For example, if a server-side validation catches a change to a non-editable field, throw an alert or take some other action to protect your system. Focus on four key areas: application monitoring, business analytics and insight; activity auditing and compliance monitoring; and system intrusion detection and forensics.

In mobile applications, developers use logging functionality for debugging, which may lead to sensitive information leakage. These console logs are not only accessible using the Xcode IDE (in iOS platform) or Logcat (in Android platform), but by any third-party application installed on the same device.  For this reason, disable logging functionality in the production release. 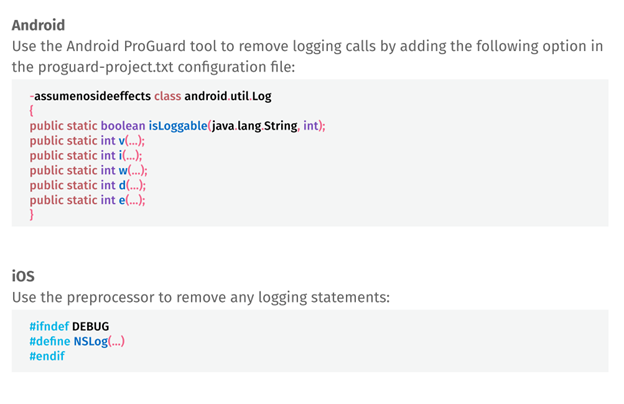 You can waste a lot of time — and unintentionally create security flaws — by developing security controls from scratch for every web application you’re working on. To avoid that, take advantage of established security frameworks and, when necessary, respected third-party libraries that provide tested and proven security controls.

The crucial thing to keep in mind about vulnerable open source libraries is that it’s not just important to know when a library contains a flaw, but whether that library is used in such a way that the flaw is easily exploitable. We know that, upon initial scan, 70.5 percent of applications have flaws in an open source library. Additionally, data compiled from customer use of Veracode’s Software Composition Analysis solution shows that at least nine times out of 10, developers aren't necessarily using a vulnerable library in a vulnerable way.

By understanding not just the status of the library but whether or not a vulnerable method is being called, organizations can pinpoint their risk and prioritize fixes based on the riskiest uses of libraries.

Returning a stack trace or other internal error details can tell an attacker too much about your environment. Returning different errors in different situations (for example, "invalid user" vs. "invalid password" on authentication errors) can also help attackers find their way in.

Give Your Secure Coding Knowledge a Boost

There isn’t a one-size-fits-all solution to writing more secure code. It takes patience, practice, and the know-how that comes from relevant training in the languages you use most and consistent best practices. Veracode Security Labs Community Edition – free to developers who want to enhance their secure coding skills – relies on hands-on training for greater impact. Practice exploiting real applications in contained environments to learn how threat actors operate and then patch them to learn how to keep your code secure.

Stay on top of the latest best practices in application security (AppSec) to improve every day. If you missed the first part of this series with more secure coding tips and tricks, read it here.