i ran across this graphic this morning on twitter : 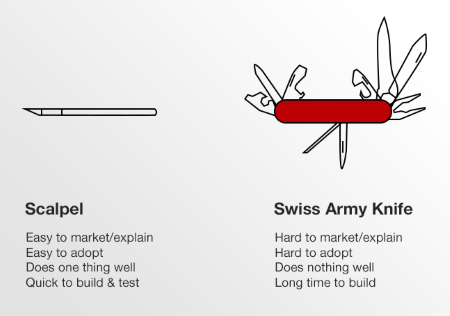 obviously the intended message is that scalpels are better than swiss army knives. certainly the scalpel looks simpler.

people like simplicity, at least a certain kind of simplicity, more in theory than in practice. minimalist products that end up in the moma generally don’t fly off the shelves at walmart.

a surgeon would rightfully prefer a scalpel, but not just a scalpel. a surgeon would have a tray full of specialized instruments, collectively more complicated than a swiss army knife.

i basically agree with the unix philosophy that tools should do one thing well, but even unix doesn’t follow this principle strictly in practice. one reason is that “thing” and “well” depend on context. the “thing” that a toolmaker has in mind may not exactly be the “thing” the user has in mind, and the user may have a different idea of when a tool has served well enough.