Nowadays, the reality of companies demands even more integration between different technologies, working together, changing, and processing data. In this ecosystem, the use of an integration platform is essential. Still, the use of an in-memory database is necessary for a significant gain in information processing performance. In this article, we will demonstrate the use of the JBoss Fuse integration platform, in conjunction with the In-memory database named  Red Hat Data Grid.

JBoss Fuse is an integration platform based on the framework Apache Camel. It focuses on mediation, transformation, and data routing among many applications, services, and devices.

In the documentation of versions 6.3 and 7.1 of JBoss Fuse, we can find references to a component called camel-jbossdatagrid, which is no longer supported by Red Hat and that has been replaced by the component camel-infinispan in the latest versions.

To demonstrate the integration between JBoss Fuse and Red Hat Data Grid, we created a quickstart project and in this article, we detail how this integration is completed. The source code of this project is available for download at https://git.io/Je1J2.

For this project, we used JBoss Fuse Standalone version 7.4 that uses the Apache Camel 2.21 and Red Hat Data Grid 7.4 that is equivalent to Infinispan version 9.4.

Beyond standalone mode, JBoss Fuse can be executed in the EAP, KARAF, and Openshift. All concepts applied here are compatible with any mode of use.

To connect to Red Hat Data Grid, the first step is to create an instance of an object of type ‘RemoteCacheManager’. This object is responsible for storing the configurations to access the remote server and managing the communication with it.

In the example below, we can visualize the implementation of ‘RemoteCacheManager’ configured in our example project. Basically, it is a java class that uses the class ‘ConfigurationBuilder’ to store the configurations of our Red Hat Data Grid.

Basic methods for this connection are:

With this configuration, the component camel-infinispan is ready to connect and to make operations like insert, read and remove the key in Red Hat Data Grid using the Hot Rod protocol.

This protocol is used to accelerate client access and server interactions faster than other protocols based on text and also allowing clients to make smarter decisions for load balance, failover, and data query.

Before continuing, it is important to understand the syntax of an Infinispan endpoint (Datagrid).  To create producers and consumers, the component uses the following syntax:

To send a key, the URI will be like the example:

In the example above, we are sending data to a remote cache called ‘cacheCustomers’, and the settings required for this submission are in the class called ‘remoteCacheManagerExample’. RemoteCacheManager is the equivalent of a dataSource for JDBC or JPA connections.

Several configuration options can be passed through the URI, and these options can be found on the component's website, within the 'The Apache Software Foundation' portal at https://camel.apache.org/components/latest/infinispan-component.html.

In our project, we created a webservice that sends a key and value through a JSON object to a route called put-key-route.  This route communicates with Red Hat Data Grid, passing key data that is stored through headers in the Camel message. 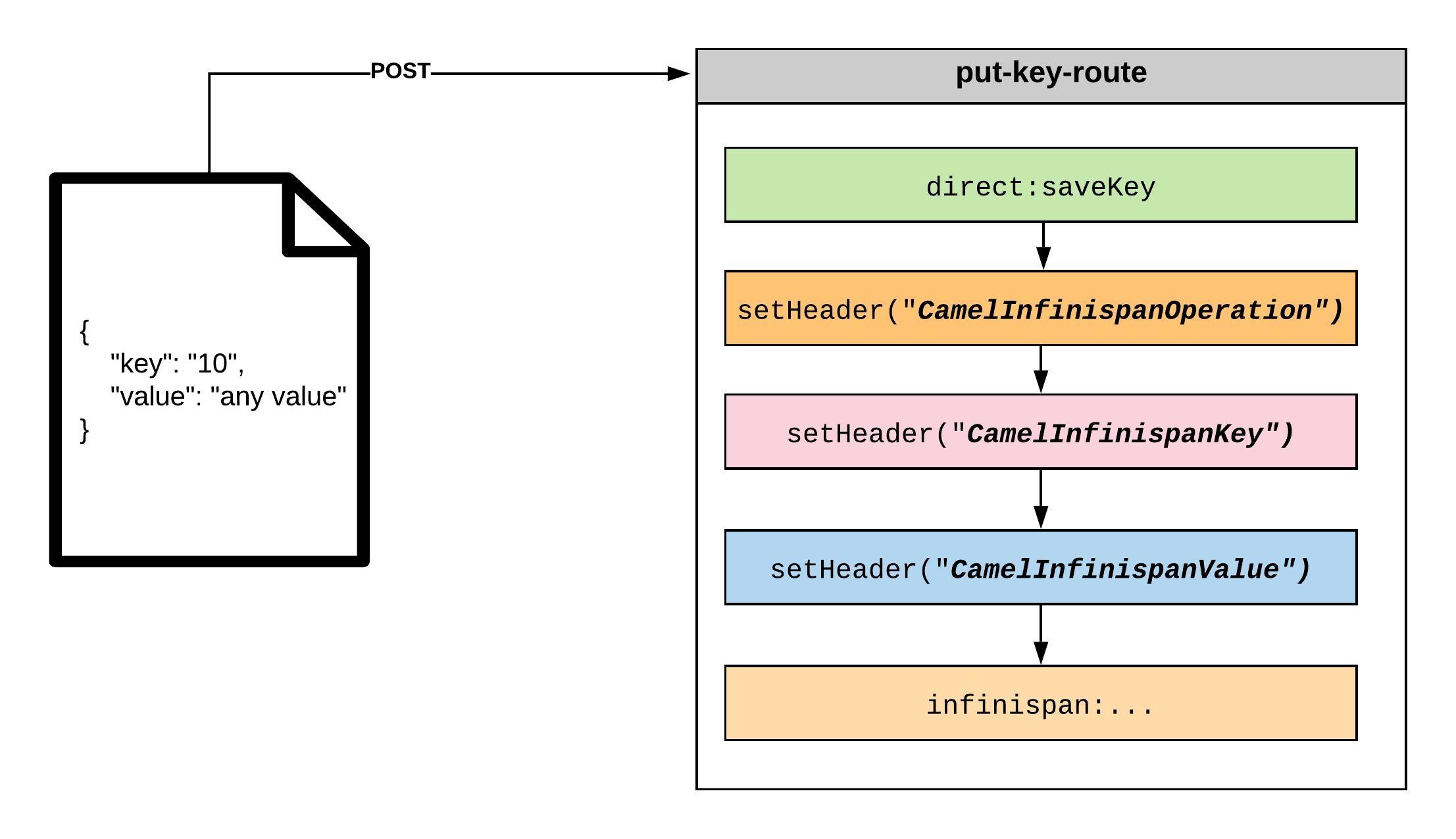 When the direct: saveKey route is triggered, it will insert 3 headers into the Camel message informing the type of operation, the name, and the contents of the key.

Below is the implementation of the direct: saveKey route.

In the above implementation, we used constants from the camel-Infinispan component API itself to enter the header's names and even the operation value. 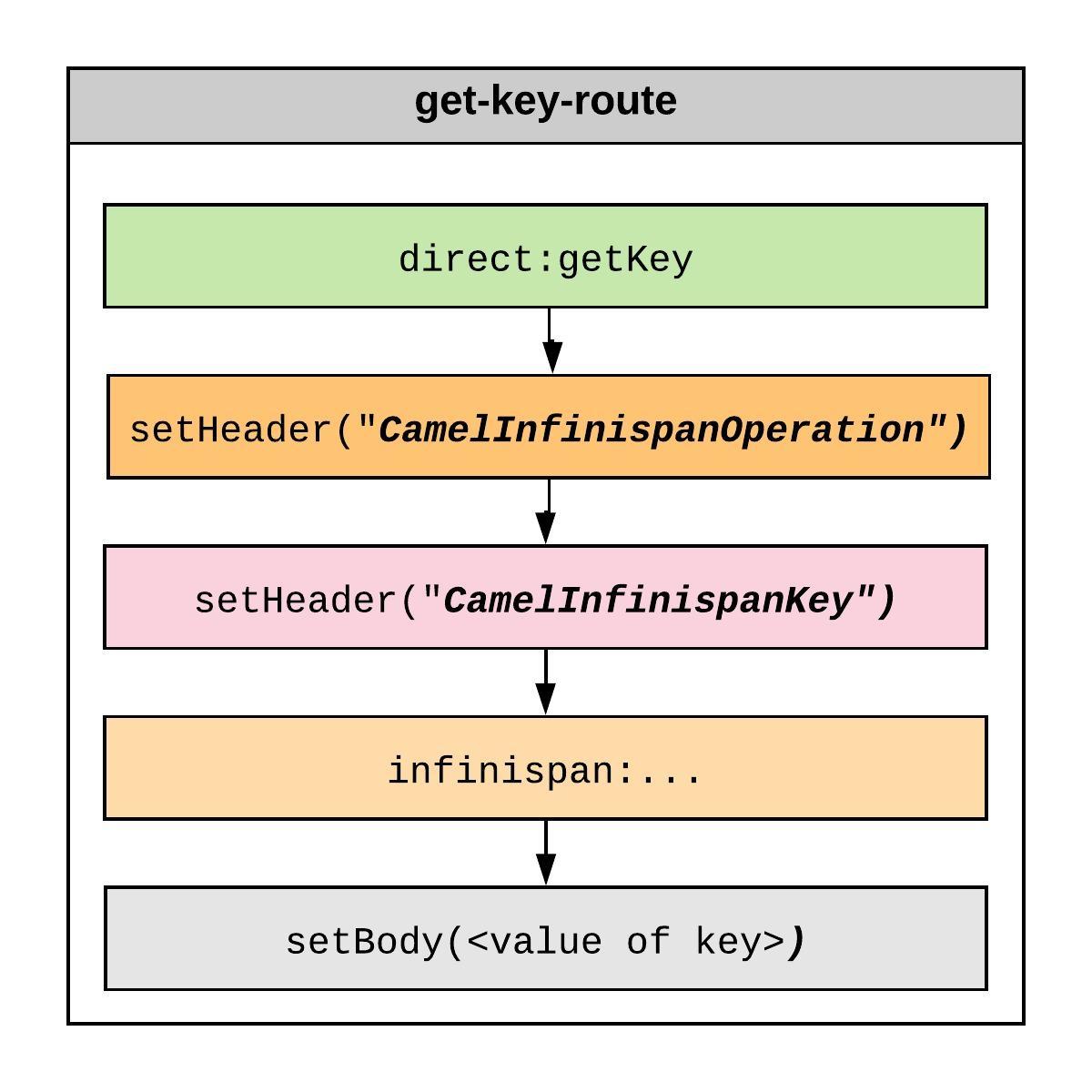 Below, we have a query route of a key.

The key value can be recovered through message body in exchange.getIn().getBody(). No error messages return in case a key is not found in the query.

A key exclusion follows the same process of the query; we just change the type of operation. In this case, we send a header with the value REMOVE and another header with the key value.

Below, is the route that removes a key in Red Hat Data Grid.

Life Cycle of a Key

The properties of LifeSpan e MaxIdle controls the life cycle of a key. These properties are configured during the cache creation inside Red Hat Data Grid; however, it is possible to overwrite the configuration of each key inserted through JBoss Fuse.

To set the LifeSpan and MaxIdle values, we use 4 headers.

In the example below, the inserted key will have a 10 seconds lifespan.

JBoss  Fuse and Red Hat Data Grid are powerful tools with a lot of features.  In this article, we talked about basic operations of inserting, getting, and removing keys in a remote cache. However, there are a lot of other features that we can explore, such as local cache, metrics, and advanced queries.