We used Apache JMeter as the load testing client. JMeter is a popular performance testing tool that allows us to test and analyze the performance of systems under a wide range of conditions. In this article, we will discuss some behaviors that we noticed (in the latency) when we use different methods to control the concurrency.

We configured JMeter (Version 3.0) to load test a web service deployed on a Tomcat (Version 8.5.6) server. Here, the web service is a simple echo service that sends the information it receives back to the client. JMeter and Tomcat server were deployed on two different machines with the following specifications:

The concurrency is controlled in the following manner:

Different Methods to Control the Concurrency

Let us now consider different methods that we can use to vary and control the concurrency in JMeter.

1. Having Multiple Thread Groups in a Single Test Plan

One possibility is to have dedicated thread groups for each concurrency (and run each thread group one after the other). 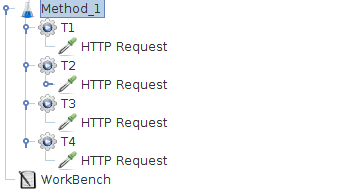 However, there are a few issues in this approach. When we analyzed the latencies of each thread group, we noticed that the initial latency values are relatively high compared to latencies in the later parts of the thread group. We also noted these initial latencies exhibit high variability. This is illustrated in the following figure.

Let's now discuss the reason for this behavior using T1 (thread group one) and T2 (thread group two). When T2 starts, it has to create a new set of threads from scratch. This will take some time (even if we set the ramp-up period to a very small value). In addition to this, T2 has to wait until all threads in T1 complete. Moreover, when analyzing the GC logs of JMeter, we saw garbage collection happening in the JMeter at the beginning of each thread group. Because of these behaviors, the latency profile of T2 becomes somewhat distorted at the beginning. We observed similar behavior in T3 and T4 as well.

In this method (as shown above), you only have one thread group in the test plan. The main advantage of this method is avoiding the duplicate configuration of the HTTP request samplers. In this approach, the same test plan is executed multiple times from the terminal by specifying the concurrency as a parameter. This method also allows you to specify the JTL for each concurrency in the terminal, thus details regarding each thread group can be accumulated separately. JMeter configuration for this is shown below. 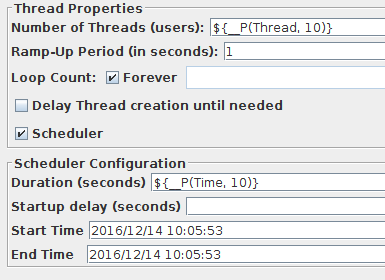 To run the script:

If you do not want to type the JMeter terminal command multiple times for each concurrency, you can create a small script with the commands and run the script.

The results obtained with this method are very similar to that of the first method. When we analyzed the results of the performance test, we noted that the initial latencies were relatively high and they exhibit higher variability compared to later. We have discussed the reason for this behavior earlier in this article. The behavior of latency is illustrated in the following figure.

If we use an ultimate thread group, we can get a smooth transition of the latencies between one thread-group and the other by controlling ramp-up period and ramp-down periods. This is illustrated in the following figure. 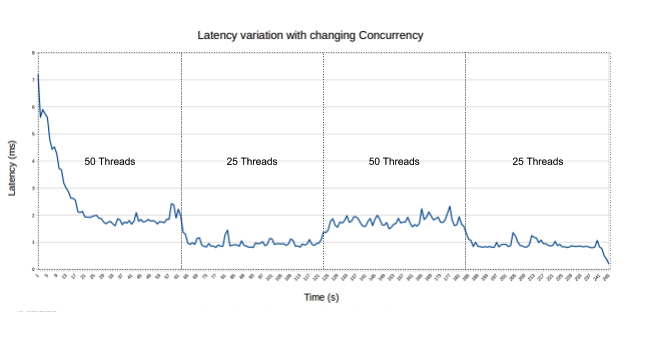 In this article, we discussed different methods one may use to change the concurrency when doing performance tests. We noted that the use of multiple thread groups (method 1 and 2 described in the article) can lead to inconsistencies in the latency values particularly at the transition point. If we use ultimate thread group, we can address this problem by controlling the ramp-up and ramp-down periods. This leads to a smooth transition of latencies between two thread groups.