I was never happy with this solution, but it works. Fortunately, a tweet of @BenediktRitter and one of @wosc suggest two alternatives to my method. 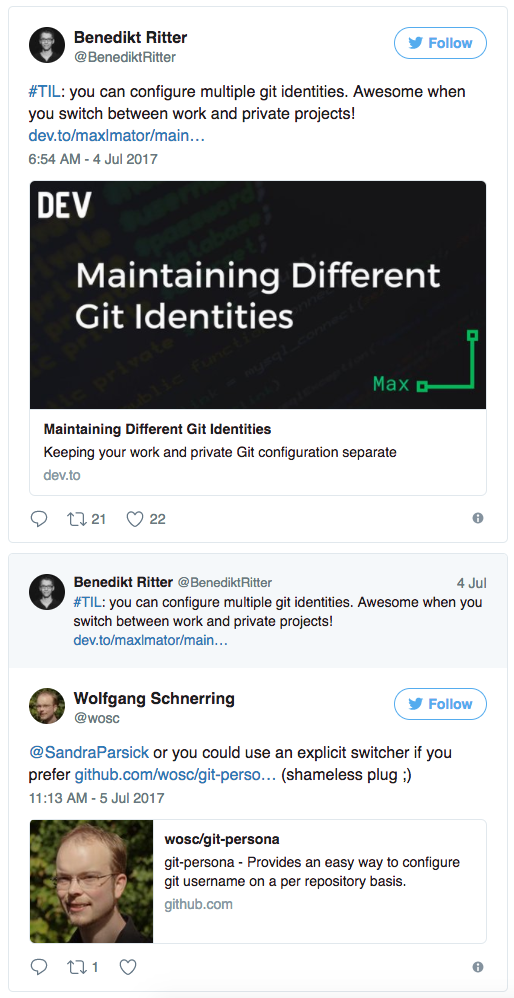 The second method is based on a Python script, that is inspired by the Mercurial extension hg-persona. The idea is that you can individually set a Git identity per Git repository. It is a one command replacement for the git config user.*command serie.

In the next two sections, I’d like to summarize how to set up and how to use these two methods. I have tested it on a Debian-based system. Let’s start with the first one.

As above described, this method is based on the Git feature “Conditional Includes.” Therefore, ensure you have installed your Git client in at least version 2.13. Assume, we want to have two Git identities, one for Github and one for work. Therefore, create two .gitconfig files in your home folder.

Then add the specific Git identity in respective .gitconfig files.

The next step is to add these two .gitconfig files to our global one and to specify when to use them.

For the second method, you have to install ws.git-persona from PyPI.

Then, open your global ~/.gitconfig and add your personas. In our cases, we add two personas, one for Github and one for work.

If you have other methods to manage different Git identities, let me know it and write a comment.