I've been wanting to create a project on Glitch for quite some time. Glitch is a startup/product/friendly community where you can create and remix Node.js projects, use an online code editor to personalize them, and you don't have to worry about hosting or deployment. And it's free! It's a really great way to start a project and prototype an idea, without having to worry about those million little things that can get in the way of your dream app.

I thought it'd be fun to share a few projects I made using the Runscope API, and how you can use them to extend Runscope functionality or create custom features for use cases you might have, like creating a custom dashboard that displays API metrics using C3.js.

Clicking on the project's link will take you to the Glitch homepage, and show you a popup with the README for the project, and also three buttons to: preview the app live, view the source code, or "Remix your own" to make a copy of the project under your account so you can play with it.

Let's take a closer look at them!

Authenticating With the Runscope API OAuth 2.0

Our first project is actually a remix of another project (github-oauth). You can give it a try here:

And you can view the source code directly here:

The goal of our first app is to ask the user to authenticate with their Runscope credentials, and show a success screen if it works. We do this by using Passport, implementing the passport-oauth2 strategy, and setting up the code to use the authorization, token, and callback URLs found in our API Authentication docs. In our server.js file:

Our project also includes an example of using the `request` package to grab the authenticated user's account information and log it to the console, but we don't display it on the success page:

This is our starting point in creating an application that uses the Runscope API, and other users will be able to use with their Runscope credentials.

Our second project is a remix of our first project and builds on its initial functionality. You can give it a spin here:

It asks the user to authenticate with its Runscope account login, and then displays a list of the user's buckets:

We do this by using the request package, and the Buckets List endpoint: 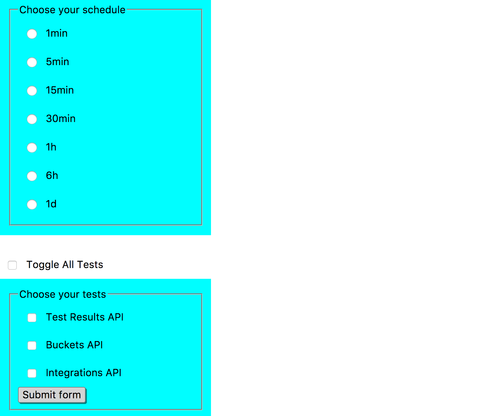 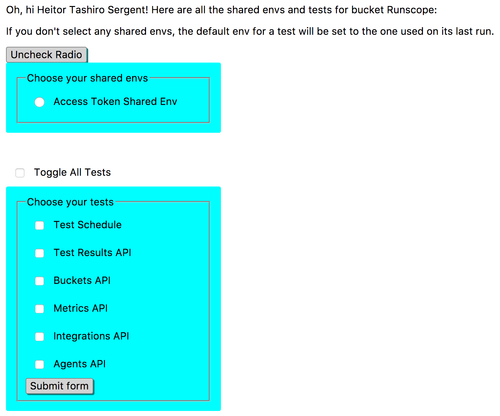 The ability to batch edit tests schedule and default environments is something that currently can't be done via our UI, but we can make it work via our API with a few lines of code.

Our last project started out as a remix of our first project, and displays metrics information from a Runscope API test such as total test runs, average response time, and success ratio. We can test out the project by going to:

It retrieves the information from our new Metrics API endpoint. We also draw a time-series chart using C3.js: 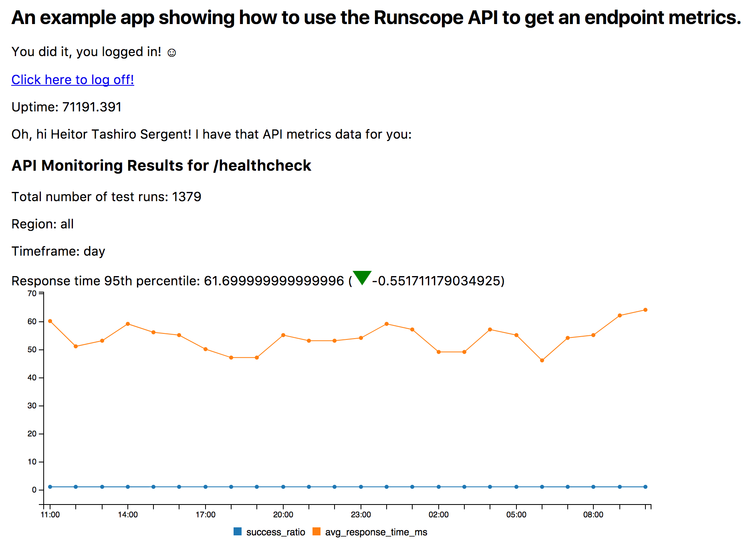 This project is a little more simple. After you authenticate with your Runscope account, there's a form at the top of the page where you can put a Runscope bucket key and test id:

You can find a test's bucket key and id by looking at the URL when you open a test in Runscope:

After that just hit Submit and the app will do its magic and retrieve the API metrics information from the Runscope API.

Remix Your Own Projects!

One of the cool things about Glitch is that you can check the source code for all of the projects above, and remix them to make your own apps. First, open the details page for the project you want to remix, and click on the "Remix your own" button:

After that, we'll need to setup our OAuth 2.0 authorization flow:

I've really enjoyed using Glitch for the past few days to build out those few sample projects. Not having to worry about setting up a developer environment, or thinking about deployment and hosting is amazing, and checking out the source code for other projects really helped me build out these prototypes.

I hope you can use some of those projects to remix your own Node.js applications, or maybe a learn a thing or two about using the Runscope API, the Passport and request Node.js packages or the C3.js project!