When anyone mentions a robot (if you're like me) two things come to mind:

For the first case we expect powerful motors, angular joints, specialized or practical grippers, etc., and we have all seen videos of these sorts of robots being very accurate, very fast, and even very gentle (e.g. picking up an egg). But it is always very obvious that those contraptions at the ends of their arms are not really hands. Those actuators can not remotely compete with the amazing range of manipulations that a "real hand" can do.

In the second case our expectations are driven mostly from our cinematic experiences (e.g. I Robot, CP30, Ava from Ex Machina, etc.). When we see hands we think differently about these devices. This is probably because so much of what defines "being human" is what we have done with our hands (tools, art, music, etc.). In fact, about a third of the human brain's motor cortex is devoted to our forearm and hands.

There is no doubt that the human hand is an amazingly evolved appendage, and that to a large extent it is responsible for many of the amazing things that humans can do. But until recently no one has engineered a robotic hand that exhibits any of the "naturalness" of the human hand. And much of the problem lies with the design and control of robot hands. Usually robot hands are designed with hinges, geared servomotors, individually actuated joints, etc. The control of these robot hands has become a hugely complex task requires the micromanagement of all of the movable components, motion inducing servos, pressure sensing feedback, etc. So, even though the robot hand is not a very good simulation of a human hand, it is further disadvantaged because controlling it is so complicated that the control software inevitably must take practical shortcuts. Think of all the people you have watched doing a "robot dance" (I enjoy watching their unnatural wrist movements the most!).

As I pointed out one of the problems with robot hands is that they incorporate existing mechanical components already used for actuators. But if you look at a human hand the finger joints are not simple hinges: they are more like ball and joint linkages. And our opposable thumb is more like ball-joints connected to ball-joints. Our digits are driven by forced generators (muscles) that are tethered to linkages (finger bones) by compliant cables (tendons). What if we built a hand like this? It might look like this: 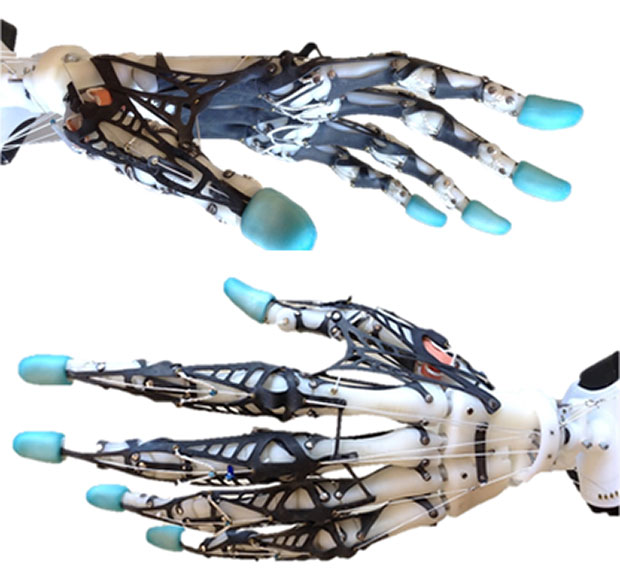 Actually, one design looks exactly like this. Zhe Xu and Emanuel Todorov from the University of Washington, in Seattle designed and built this in their laboratory. As Xu said:

“The conventional approach to designing anthropomorphic robotic hands often involves mechanizing biological parts with hinges, linkages, and gimbals in order to simplify the seemingly complicated human counterparts. This approach is helpful for understanding and approximating the kinematics of the human hand in general, but inevitably introduces undesirable discrepancies between the human and robotic hands since most of those salient biomechanical features of the human hand are discarded in the mechanizing process. The inherent mismatch between mechanisms of these robotic hands and biomechanics of human hands essentially prevents us from using natural hand motion to directly control them. Thus none of the existing anthropomorphic robotic hands can achieve the human-level dexterity yet.”

Below is an amazing video of this new kind of robotic hand in action:

You should observe something quite interesting as you watch the hand grasp everyday objects. The first thing that strikes you is that it does seem far more natural as it moves and in the way it holds the objects. And then you realize that much of the way it works is embodied in its design and not in the micromanagement of the myriad of components. Part of the software of the control behavior of the hand is in the actual physical embodiment of the hand. 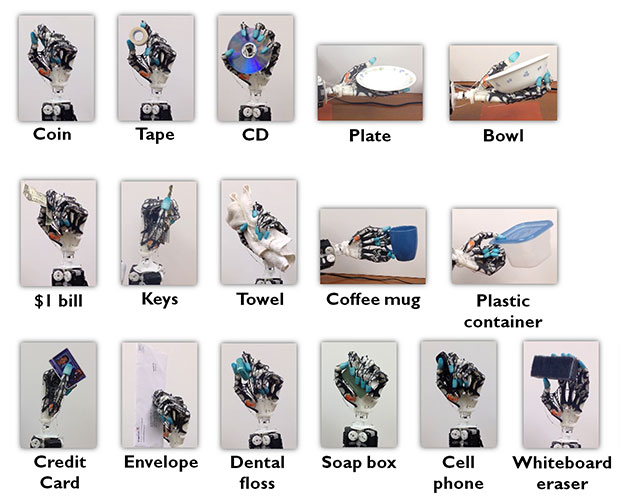 There is a lesson to be learned here: So often we think of the software that we write as completely distinct and isolated components in the systems to which we contribute. But truly elegant and powerful systems are the result of the marriage of form and function. As we move into the age of automated devices (IoT, self driving cars, etc.) we should keep this in mind. These things are in the real world and need to be controlled in natural ways. If we accomplish that then everybody wins... hands down!