as announced in my previous article i am starting a new project to provide an easy api to fill in pojos with dummy data.

the goal of this article is to collect a first draft of requirements for podam. ok, so what's needed by a tool to fill pojos with dummy data?

let's try to capture the above requirements in steps. let's start with the simplest scenario, e.g. i want a pojo with all its attributes (including its graph objects) set with some dummy values. given the following domain model: 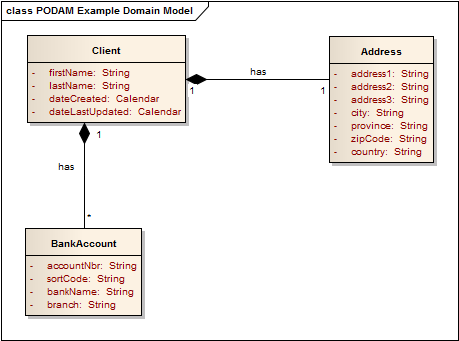 a client has got an address and one or more bankaccounts. if i am writing a junit test for a service which uses the client pojo, i'd like podam to offer something like this:


podamfactory should return a client pojo whose primitive types attributes are filled with values but also whose graphed objects are filled with data. so the client will have an address object filled with dummy data and a collection of one or more bank accounts.

now let's look at some more interesting scenarios. let's say that i wanted a client pojo filled with data but i wanted the address attribute to be skipped. i could write something like the following:


i could use a @podam annotation with boolean attribute skip = true to indicate that a certain attribute should not be filled by podam. of course for graphed objects to be filled with dummy data, these should be podam-compliant (e.g. have a no-arguments constructor).

another scenario could be that i wanted to specify exactly how many bank accounts i wanted. using the same class as before i could have:


by using the nbrelements attribute i could instruct podam on how many elements in the list i'd like to be filled with dummy data. so it seems that a @podam annotation is emerging from the initial requirements. the question here is whether such annotation (which belongs mainly to the testing world) would be acceptable in a production pojo code. my view is that annotations in general are innocuous and that the benefits of having fine grained control over auto-generated dummy data during testing outweighs the cons of having a "test related" import in our code.

let's see if i can define some attributes of a @podam annotation.

so far these are the attributes i could think of. what do you think folks?