curator's note: this article was co-authored by marko rodriguez and stephen mallette over at the aurelius blog.

complex data storage architectures are not typically grounded to a single database. in these environments, data is highly disparate, which means that it exists in many forms, is aggregated and duplicated at different levels, and in the worst case, the meaning of the data is not clearly understood. environments featuring disparate data can present challenges to those seeking to integrate it for purposes of analytics, etl (extract-transform-load) and other business services. having easy ways to work with data across these types of environments enables the rapid engineering of data solutions.

gremlin is a domain specific language (dsl) for traversing graphs. it is built using the metaprogramming facilities of groovy , a dynamic programming language for the java virtual machine (jvm). in the same way that gremlin adds upon groovy, groovy adds upon java, by providing an extended api and programmatic shortcuts that can cut down on the verbosity of java itself.

gremlin comes equipped with a terminal, also known as a repl or cli , which provides an interface through which the programmer can interactively traverse the graph. given gremlin’s role as a dsl for graphs, performing interactions with a graph represent the typical usage of the terminal. however, given that the gremlin terminal is actually a groovy terminal, the full power of groovy is available as well:

with these capabilities in hand, gremlin presents a way to interact with a multi-database environment with great efficiency. the following sections detail two different use cases, where gremlin acts as an ad-hoc data workbench for rapid development of integrated database solutions centered around a graph. 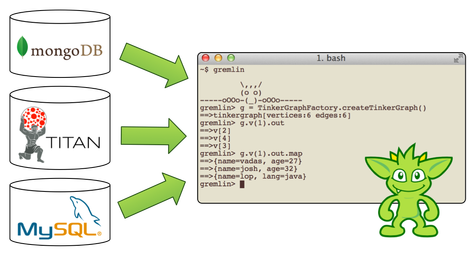 loading data to a graph from a different data source might take some careful planning. the formation of a load strategy is highly dependent on the size of the data, its source format, the complexity of the graph schema and other environmental factors. in cases where the complexity of the load is low, such as scenarios where the data set is small and the graph schema simplistic, the load strategy might be to utilize the gremlin terminal to load the data.

mongodb as a data source

consider a scenario where the source data resides in mongodb . the source data itself contains information which indicates a “follows” relationship between two users, similar to the concept of a user following another user on twitter. unlike graphs, document stores, such as mongodb, do not maintain a notion of linked objects and therefore make it difficult to represent the network of users for analytical purposes.

this kind of data set translates easily to a graph structure. the following diagram expresses how the document data in mongodb would be expressed as a graph. 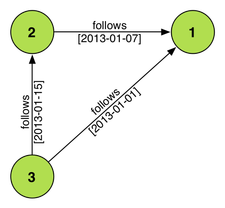 to begin the graph loading process, the gremlin terminal needs to have access to a client library for mongodb. gmongo is just such a library and provides an expressive syntax for working with mongodb in groovy. the gmongo jar file and its dependency, the mongo java driver jar , must be placed in the gremlin_home/lib directory. with those files in place, start gremlin with:

gremlin_home/bin/gremlin.sh
gremlin automatically imports a number of classes during its initialization process. the gmongo classes will not be part of those default imports. classes from external libraries must be explicitly imported before they can be utilized. the following code demonstrates the import of gmongo into the terminal session and then the initialization of connectivity to the running mongodb “network” database.

at this point, it is possible to issue any number of mongodb commands to bring that data into the terminal.

the steps for loading the data to a blueprints-enabled graph (in this case, a local titan instance) are as follows.

this method for graph-related etl is lightweight and low-effort, making it a fit for a variety of use cases that stem from the need to quickly get data into a graph for ad-hoc analysis.

mysql as a data source

the process for extracting data from mysql is not so different from mongodb. assume that the same “follows” data is in mysql in a four column table called “follows.”

aside from some field name formatting changes and the “id” column being a long value as opposed to a mongodb identifier, the data is the same as the previous example and has the same problems for network analytics as mongodb did.

groovy sql is straightforward in its approach to accessing data over jdbc . to make use of it inside of the gremlin terminal, the mysql jdbc driver jar file must be placed in the gremlin_home/lib directory. once that file is in place, start the gremlin terminal and execute the following commands:

a graph database is likely accompanied by other data sources, which together represent the total data strategy for an organization. with a graph established and populated with data, engineers and scientists can utilize the gremlin terminal to query the graph and develop algorithms that will become the basis for future application services. an issue arises when the graph does not contain all the data that the gremlin user needs to do their work.

in these cases, it is possible to use the gremlin terminal to execute what can be thought of as a polyglot query . a polyglot query blends data together from a variety of data sources and data storage types to produce a single result set. the concept of the polyglot query can be demonstrated by extending upon the last scenario where “follows” data was migrated to a graph from mongodb. assume that there is another collection in mongodb called “profiles”, which contains the user demographics data, such as name, age, etc. using the gremlin terminal, this “missing data” can be made part of the analysis.

the first gremlin statement above represents a one-step traversal, which simply asks to see the users who follow vertex “1.” although it is now clear how many users follow this vertex, the results are not terribly meaningful. it is only a list of vertex identifiers and given the example thus far, there is no way to expand those results as that data is representative of the total data in the graph. to really understand these results, it would be good to grab the name of the user from the “profile” collection in mongodb and blend that attribute into the output. the second line of gremlin, the polyglot query, looks to do just that. it expands that limited view of the data by performing the same traversal and then reaching out to mongodb to find the user’s name in the “profile” collection.

the anatomy of the polyglot query is as such:

with the name of the users included in the results, the final output becomes more user friendly, perhaps allowing greater insights to surface.

loading data to the graph and gathering data not available in the graph itself are two examples of the flexibility of the gremlin terminal, but other use cases exist.

the power and flexibility of gremlin and groovy make it possible to seamlessly interact with disparate data. this capability enables analysts, engineers and scientists to utilize the gremlin terminal as a lightweight workbench in a lab of data, making it possible to do rapid, ad-hoc analysis centered around graph data structures. moreover, as algorithms are discovered, designed and tested, those gremlin traversals can ultimately be deployed into the production system.