Remote Procedure Call (RPC) is a computer communication protocol that allows the program running on one computer to call subprograms on another computer, without coding for remote interaction. In the object-oriented programming paradigm, RPC calls are represented by remote invocation or remote method invocation (RMI). In simple terms, RPC is a method to invoke a remote known procedure through the network. RPC is a design and concept, but not a specific technology. RPC involves three key points:

The official RPC frame of Go is insufficient for large projects. Golang officially recommends the GRPC frame, which is maintained in the community. GRPC provides all basic functions and fully utilizes the features of Golang. You can learn a lot just by reading the source code.

As just mentioned, Golang officially recommends GRPC. What are the advantages of GRPC? 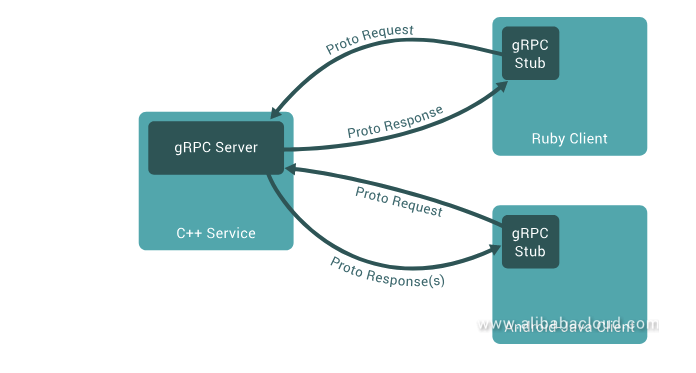 The PouchContainer community has provided a clear architecture diagram. However, the diagram is extremely detailed, which makes it difficult to illustrate RPC on PouchContainer. The following is a simplified figure: 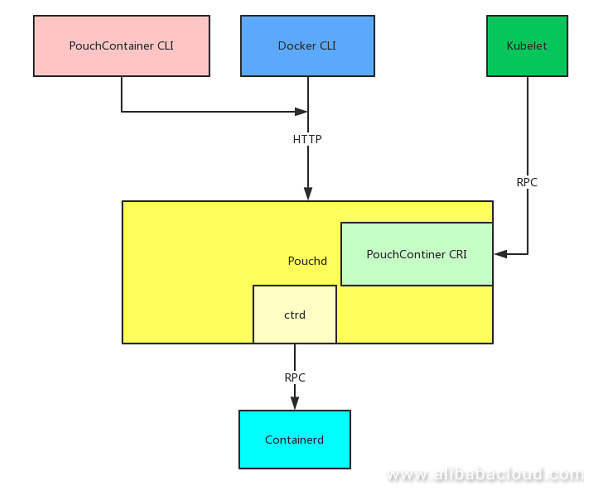 The arrows point to the service end. When the Pouchcontainer Daemon (Pouchd) starts, two types of services are also started: HTTP Server and RPC Server. The PouchContainer was designed to work with Docker, so both Pouch CLI and Docker CLI can send requests through the HTTP server started by Pouchd to operate the PouchContainer. In addition, PouchContainer cooperates with CNCF and is compatible with Kubernetes. It implements the PouchContainer CRI defined by the Kubernetes community. The RPC server related to CRI can be started using enable-cri. By default, Pouchd does not start any service. In addition, the Containerd provides container service to the bottom layer of PouchContainer, and they interact through RPC client.

As we know, PouchContainer provides the RPC server to be invoked by Kubelet on CRI Manager, and invokes the bottom-layer Containerd through RPC Client. The GRPC frame is used in this process.

The following is the simplified codes for server booting:

The simplified codes are similar to the demo officially provided by GRPC, including the following steps:

GRPC has done many jobs. We only need to write the proto files to define services and use tools to generate the corresponding server and client codes. The server additionally carries out the previous three steps. Due to the limitation on Kubernetes and service requirements, CRI Manager needs to offer more services. Therefore, the PouchContainer team expanded the CRIs. The steps are as follows:

In the simplified PouchContainer architecture, you can find that Pouchd interacts with Containerd through ctrd. For better understanding, we can see the NewDaemon workflow:

To understand what ctrd.NewClient did, let's look at the following source code.

The code can be understood by dividing it into the following steps: