I’ve been using TestDriven.NET by Jamie Cansdale for quite a few years now. Ostensibly it’s a unit test runner, but that is not the real reason why you should use it. The killer feature, the one that will give you developer super powers, is the ability to run any arbitrary code under the cursor.

TestDriven allows you to run individual unit tests simply by placing the cursor within the test method and running the command ‘RunTests’ (I have this mapped to the F8 key - who uses bookmarks anyway?) The really cool thing is that the method doesn’t need to be attributed as a unit test, it can be any arbitrary method. Any return value from the method is written to the Visual Studio output console, as are any Console.WriteLine() or Console.Write() statements. This gives you immediate feedback on any code with a single keystroke. 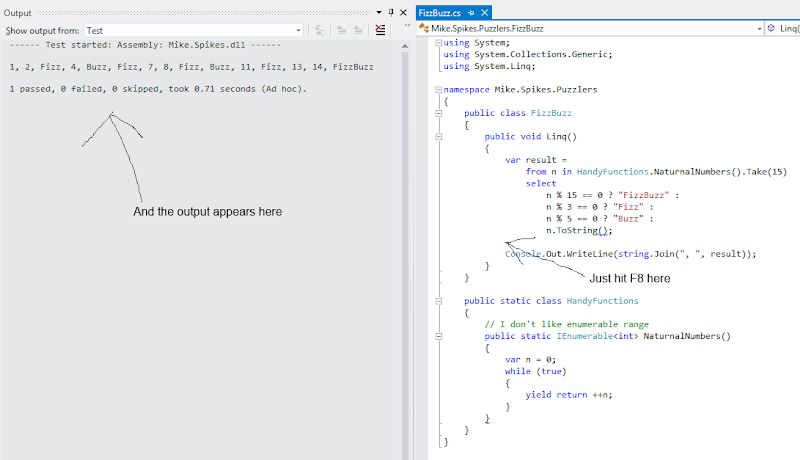 Why is this awesome? The key to productive software development is reducing latency; the cycle time between an action and its results. That’s why continuous integration and continuous delivery are such huge wins. When you’re coding, the quicker you can try a quick experiment and see the results, the more productive you will be. The big problem with compiled languages like C, C++, Java, and C# is that the compilation cycle acts as huge barrier to iteration. I still remember with horror how I used to write some code, launch my application, navigate to where the feature would be exercised (taking care to enter the correct parameters of course) and then watch it fail. And then I’d repeat the same tedious cycle over and over again. That’s one of the main reasons why .NET developers spend so much time stepping through code in the (admittedly excellent) debugger, because it’s hard otherwise to know how the last few lines of code you wrote are executing. Now I run code continuously without launching anything. Simply write a function, F8, iterate. It’s so much more productive.

I know fellow developers who use other tools as a scratchpad for iterative experiments. LinqPad is very popular and ScriptCS is deservedly getting a lot of attention. But TestDriven has a huge advantage over these because it works inside your Visual Studio environment. There’s no need to copy and paste your experiment into your application, you iterate in place and in the context of your existing code.

Give it a try. I’ve found it a game  changer for C# development. It’s a pretty good test runner too.