So you have multiple data sources and most of your data has ended up in the cloud, or will soon. It’s a mix of structured and unstructured, static and streaming, in many different formats, and often fractured across data warehouses, open source databases, proprietary databases, data lakes, document stores and object storage like Amazon S3. How best to unify access to that data and share it with internal and external applications and users to support the ever-widening variety of analytical and operational use cases?

It sounds challenging, but there are several solutions. One option is to try and consolidate all the data by moving it into a monolithic (or yet another) database, cloud warehouse or data lake. But this is often impractical, time-consuming, and likely to increase cost, effort, and vendor lock-in. Let’s face it, adding another vendor to the mix is not high on the CIO’s to-do list.

A more successful approach that many data-driven companies like Facebook, Uber, Airbnb, Twitter, LinkedIn, and Netflix have deployed is a modern architecture built on open source Presto - the federated, extensible, distributed SQL query engine which is becoming the dominant standard for analytics. This architecture, built around open source PrestoDB, with open formats, open interfaces, and open cloud features, is being termed the Open Analytics stack.

Why has Open Analytics and Presto’s time come? Here are three of the most significant reasons:

Where did PrestoDB come from? It was designed at Facebook in 2012 to enable their data analysts to run interactive SQL on multi-petabyte data volumes, initially in Apache Hadoop. Prior to that, they tried using Apache Hive but suffered performance problems - its MapReduce execution engine was okay for batch processing but wasn’t cut out for interactive queries. The following year Facebook open sourced the code, and by 2014 multiple organisations had started using it, such as Netflix who deployed Presto for querying 10 petabytes of their data stored in AWS S3. Features, functions and connectors were steadily added by an active community of contributors including Facebook themselves and in 2019 Facebook donated the PrestoDB project to the Linux Foundation - already the parent of the Cloud Native Computing Foundation (CNCF) amongst others - meaning PrestoDB is completely open source under the Apache 2.0 license.

Today Presto is enjoying rapid adoption as the modern alternative to traditional tightly coupled data architecture, as companies large and small see the benefit of a scalable, distributed, loosely coupled, SQL-based, pluggable, disaggregated stack that enables querying across data repositories. Being disaggregated is a significant industry trend and a hallmark of Presto, but what does it mean? Put simply, it is the separation of compute and storage. In other words, PrestoDB fully abstracts the data sources it can connect to, and data stays where it is. PrestoDB works directly on files in S3 for example, requiring no ETL transformation. Presto is also a proven technology; to illustrate, Amazon Athena, a very commonly used big data service, is built on PrestoDB.

This federated, disaggregated stack is open: Open source (Apache 2.0), open formats (PrestoDB doesn’t use any proprietary formats), open interfaces (PrestoDB is ANSI SQL compatible, uses standard JDBC / ODBC drivers, etc.), and “open cloud” (PrestoDB is cloud agnostic, and because it runs as a query engine without native storage, it aligns perfectly with containers and can be run on any cloud).

Presto’s architecture is distributed and parallel in design which means it scales very efficiently to handle data of all sizes, from GBs to PBs. A Presto cluster uses a coordinator/worker server architecture: 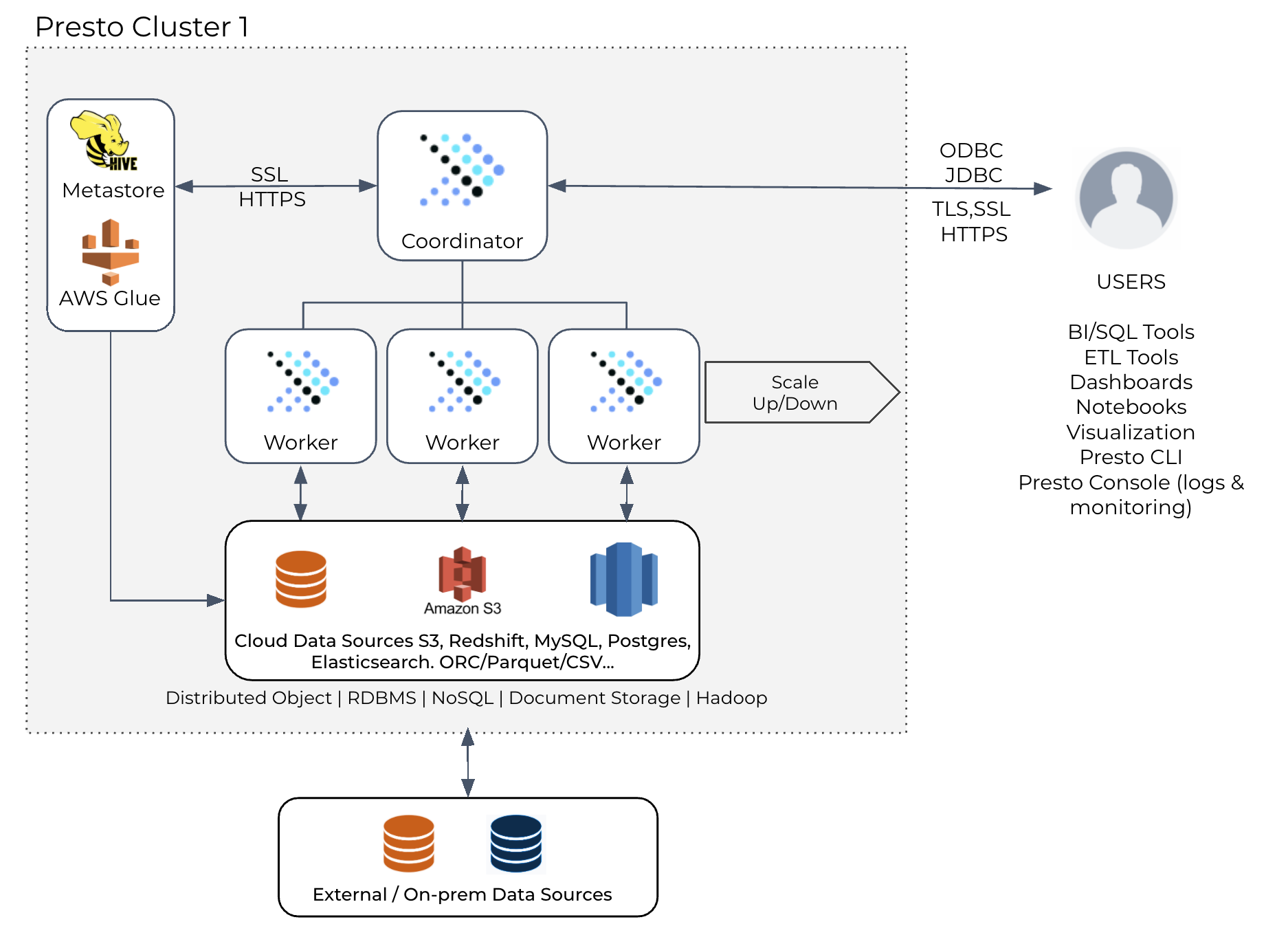 PrestoDB together with the following 3 elements make up the Open Analytics stack:

The Open Analytics stack is a non-proprietary architecture - the managers, catalogs, query engine and underlying storage engines all remain independent.  This ecosystem is entirely vendor-neutral, depending on your choices, making it easy to avoid lock-in with any particular vendor’s technology. For many, this is a hugely important quality.

To get started with PrestoDB, you can download the Presto tarball or you can choose to use a Docker sandbox, or an AMI - the documentation will help you get started. There will be some configuration effort, particularly around the configuration of data sources and the required metastore. Or plump for zero-deployment effort by choosing a fully-managed Presto cloud service.

PrestoDB really shines for these five use cases:

If you are interested in learning more about PrestoDB and its benefits as the defacto standard query engine, do check out its documentation.