If your application needs fast primary-key lookups, and you can afford the required additional memory, this codec might be a good match for the id field. To test this, I switched Lucene's nightly benchmark to use MemoryCodec (just for its id field), and performance jumped from around 179 K to 509 K lookups per second: 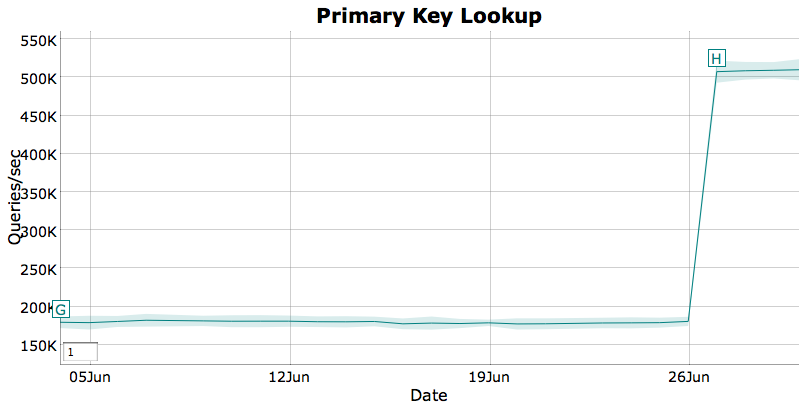 This is an awesome improvement! It's particularly impressive as the id field was previously indexed using PulsingCodec, which was already faster than the default StandardCodec.

This is the performance for a single thread, and should scale up linearly if you use multiple threads. Each lookup resolves 4,000 keys in order at once from the id field, performing the lookups segment by segment for best performance (see the source code). The index has 27.6 M docs across multiple segments.

Of course, there is added memory required, specifically 188 MB for this index, which works out to 7.1 bytes per document on average.

There are two sources of MemoryCodec's gains. First, the obvious one: since everything is in memory, you never wait for an I/O seek operation, as long as you ensure the sneaky OS never swaps out your process memory.

Second, I separately added a new seekExact API to TermsEnum, enabling codecs to save CPU if the caller does not need to know the following term when the target term doesn't exist, as is the case here. MemoryCodec has an optimized implementation for seekExact (and so does the cool SimpleTextCodec!). Eventually other codecs should as well, by using the block tree terms index, but we're not there yet.

The id field in the nightly benchmark omits term freq and positions, however MemoryCodec is fully general: you can use it for any field (not just primary-key), storing positions, payloads, etc. Also, its values are zero-padded sequential integers (00000001, 00000002, 00000003, etc.), which is likely important for performance as it allows maximal sharing in the FST. I haven't tested but I suspect had I used something more random, such as GUIDs, memory usage would be higher and lookup performance worse as each segment's FST would be less dense (share less).

Of course, Lucene is not a database, and you normally use it for its fast search performance, not primary-key lookups. The one common search use case where you do require primary-key lookups is during indexing, when deleting or updating documents by an id field. Near-realtime search with updates or deletions relies on this, since the deleted documents must be resolved during reopen, so we also see a healthy speedup in the NRT reopen time: 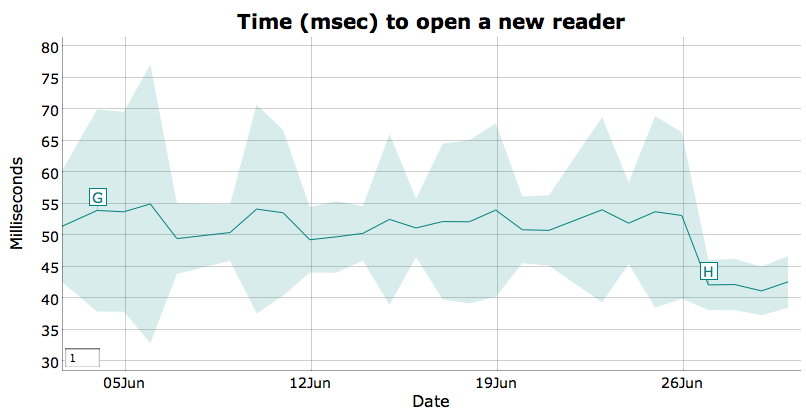 The NRT latencey dropped from around 52 milliseconds to 43 milliseconds, a 17% improvement. This is "only" 17% because opening a new reader must also do other things like flush the indexed documents as a new segment.

Perhaps more importantly, the variance also dropped substantially, which is expected because with MemoryCodec and NRTCachingDirectory, NRT reopen is fully I/O free (performs no reads or writes when opening a new reader).

One limitation of MemoryCodec is it's an all-or-nothing deal: all terms and postings are in memory, or they aren't. LUCENE-3069, still to be done (any volunteers?), aims to fix this, by enabling you to separately choose whether terms and/or postings data should be in memory.

I suspect an even more specialized codec, for example one that requires the field values to be compact integers, and also requires that the values are unique (only supports primary-key fields), could do even better than MemoryCodec by storing the mapping in global (across all segments) parallel arrays. Such a codec would no longer be general; it'd only work for primary-key fields whose values are compact integers. But it'd have faster lookups than MemoryCodec and should use less memory per document. This codec could simply wrap any other codec, i.e. it would create the arrays on reader initialization, and delegate persisting the postings into the index to the wrapped codec.
Relational database