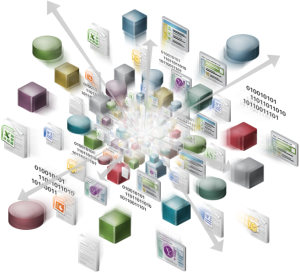 why are some companies in retail, insurance, financial services and healthcare racing to position themselves in big data, in-memory data clouds while others don’t seem to care?

what business problems are being targeted?

to address these petascale problems an elastic/adaptive infrastructure for data warehousing and analytics capable of three things is converging:

as a result,  a new bi and analytics framework is emerging to support public and private cloud deployments.

the excitement is that big data capabilities fundamentally change the core premise of bi and analytics – the ability to have end-users (and even machines) perform ad-hoc analysis and reporting tasks over large and continuously growing amounts of structured and unstructured information such as log files, sensor data, streaming data, sales transactions, emails, research data and images collectively known as ‘big data.’

big data is a hot topic because it represents the first time in about 30 years that people are rethinking databases and data management. literally, since about 1980 the enterprise database market has consolidated around 3 vendors – oracle, ibm and microsoft.

innovation is in multiple categories:

innovation around big data is also happening on other fronts from the core (e.g., analytics and query optimization), to the practical (e.g., horizontal scaling), to the mundane (e.g., backup and recovery).

so if you have not heard of these tools – hadoop, nosql, mongodb, cassandra, hbase , columnar databases, data appliances – then it’s time for a quick primer.

cassandra was developed by facebook and later open sourced in 2008. cassandra is influenced by the google bigtable model, but also uses concepts from amazon’s dynamo distributed key-value store.  eventually, cassandra became an apache project . it falls under a category of databases called nosql , which stands for not only sql.   cassandra database is used by facebook , digg and twitter.

hbase – is nosql open-source, column-oriented store database modeled from google’s bigtable system. hbase is an apache project. it is part of the hadoop ecosystem. see this presentation on how facebook uses hbase in production .

hadoop – apache hadoop is a popular open-source software framework for distributed/grid-computing environments that enable applications to analyze large data sets. r elational database systems are good at data retrieval and queries but don’t accept new data. hadoop and other tools get around this and allow data ingestion at incredibly fast rates.

hadoop was built initially by doug cutting while he was at yahoo , has become prominent first in unstructured data management and cloud computing.

hadoop is designed to process terabytes and even petabytes of unstructured and structured data. it breaks large workloads into smaller data blocks that are distributed across a cluster of commodity hardware for faster processing.  but hadoop requires additional programming tools such as pig or hive to write sql-like queries to retrieve the data.

hadoop builds on the mapreduce algorithm.  mapreduce, first introduced by google in 2004,  consists of two functions – map and reduce. map takes large computational problems, breaks them down into smaller subproblems and distributes those to worker nodes, which solve the problem and pass the answer back to the master node. the reduce function consolidates the answers from the map function to produce the final output. search algorithms (public cloud) are often designed in this fashion.

hadoop runs on a collection/cluster of commodity, shared-nothing x86 servers. you can add or remove servers in a hadoop cluster (sizes from 50, 100 to even 2000+ nodes) at will; the system detects and compensates for hardware or system problems on any server. hadoop  is self-healing. it can deliver data — and can run large-scale, high-performance processing batch jobs — in spite of system changes or failures. 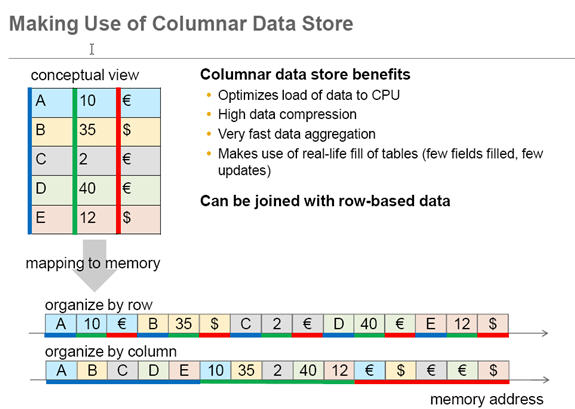 data appliances are one of the fastest growing categories in big data.  data appliances integrate database, processing, and storage in a integrated system optimized for analytical processing and designed for flexible growth. the architecture is based on the following core principles:

a number of vendors are going down the path of appliance and quasi-appliance offerings which have some preconfiguration of hardware and software,  cloud-supporting deployments, and reference configurations.

sap hana is an equivalent of exadata and debuted at sapphire 2011. hana is based on a fundamental computer science principle:  when operating on large data sets and want fast response times, do not move data from disk unless absolutely necessary.  separate olap (bi data) and oltp (transaction data).  have the olap in-memory and speed up the dashboards, reporting and analytics. 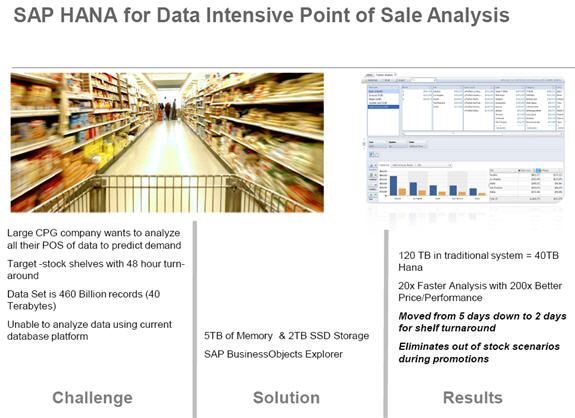 mongodb is an open source database, combining scalability, performance and ease of use, with traditional relational database features such as dynamic queries and indexes. it has become the leading nosql database choice, with downloads exceeding 100,000 per month. thousands of customers including fortune 500 enterprises and leading web 2.0 companies are developing large-scale applications and performing real-time “ big data ” analytics with mongodb.  for more information, visit www.mongodb.org or www.10gen.com . 10gen develops mongodb, and offers production support, training, and consulting for the database.

there are many new database directions appearing on the landscape today. these include nonschematic dbms ( “nosql”), cloud databases, highly distributed databases,  small footprint dbms, and in-memory database (imdb).  the business applications of these are driven by high performance, low latency and efficiency in deployment. all of these are driven by the premise that insight into data requires more than tabular analysis.

google in may 2011 open-sourced a bigtable-inspired key-value database library called leveldb under a bsd license. it was created by dean and ghemawat of the bigtable project at google . a recent blog post from google made the project more widely known. it’s available for unix based systems, mac os x, windows, and android.

according to the announcement: “leveldb may be used by a web browser to store a cache of recently accessed web pages, or by an operating system to store the list of installed packages and package dependencies, or by an application to store user preference settings. we designed leveldb to also be useful as a building block for higher-level storage systems. upcoming versions of the chrome browser include an implementation of the indexeddb html5 api that is built on top of leveldb. google’s bigtable manages millions of tablets where the contents of a particular tablet are represented by a precursor to leveldb.”

smart meters in the utilities industry. the rollout of smart meters as part of the smart grid adoption by utilities everywhere has resulted in a deluge of data flowing at unprecedented levels.   most utilities are ill-prepared to analyze the data once the meters are turned on.

all these firms are going after two distinct opportunities:

–  big data in the public cloud

– big data in the private cloud

as i speak to customers,  it is becoming more clear to me that there is going to be growing push towards an elastic / adaptive infrastructure for data warehousing and analytics.  with increasing focus on mobility and faster decision making…the business is going to push for this faster than corporate it can react.

what’s next? that’s a simple question to ask, but it’s not so simple to answer.