xamarin forms is cool because it allows sharing of not just the business logic but also the user interface, unlike the traditional xamarin approach which requires you to create multiple projects with their own user experience and features. however, at some point, even with xamarin forms you have to deal with platform specific code: unless your application leverages only plain and simple features that can be embedded into a pcl (like in the sample project we’ve created in the previous posts , where we simply downloaded some data from a rest api and we displayed it to the user). sooner or later you will have to use a feature that requires you to write code which is different based on the target platform. there are many samples of this scenario, and one of the most common is geolocalization. android, ios, and windows offer a way to geolocalize the user, but every platform uses its own approach and apis, so you can’t include them in the portable class library since these apis aren’t shared among the platform.

luckily, to make the developer’s life easier, xamarin has created many plugins for the most common scenarios like geolocalization, file system access, network, etc. which are available on nuget or github ( https://github.com/xamarin/xamarincomponents )

however, not all the scenarios are covered, so it may easily happen that you are required to implement your own plugin. xamarin forms includes an infrastructure to handle this requirement in an easy way, based on a class called dependencyservice . from a high level, here is how it works:

thanks to this attribute, you are now able to use the dependencyservice class and the get<t>() method (where t is the interface type) in your pcl to get the proper implementation of the service, based on the platform where the app is running. consequently, let’s say that in your pcl you have, at some point, the following code:

so far, so good. however, to reach this goal in our mvvm application, we would need to use the dependencyservice class in a viewmodel, which isn’t a great approach: using a static property in a viewmodel makes things harder to test. additionally, this approach would require us to use two different approaches based on the service type:

with other mvvm frameworks, a typical workaround is to use the dependencyservice in the framework’s bootstrapper to get the platform specific instance and then register it into the dependency container we’re using. this way, we can continue to leverage the usual approach to simply add a parameter in the viewmodel’s constructor and to have its implementation automatically injected. this is made possible by the fact that basically all the dependency containers allow to register not only a generic type (which means that, in this case, the container will create a new instance of the class when it’s requested) but also to assign a specific implementation to an interface.

here is a sample code of how it would work:

however, prism is smarter than that and it’s automatically able to register into its container every class it finds in each platform specific project decorated with the dependency attribute. you can find a real example in the infoseries app on my github repository: https://github.com/qmatteoq/xamarinforms-prism/tree/master/infoseries

i’ve decided to implement a feature that allows a user to share, from within the detail page of a tv show, the poster image of the show. this is something that needs to be implemented in a different way for each platform (since each of them has its own unique apis to share content) and we can’t leverage an existing plugin (since the one available in the xamarin repository supports only text sharing). as such, i’ve created in the xamarin forms portable class library the following interface:

the interface simply describes an asynchronous method, called shareshirt() , which accepts as parameter the title of the show and the path of the image to share. the next step is to implement this interface in every platform-specific project. i won’t go into the details, because it would be out of scope for the post, but for example here is how it looks in the android project:

thanks to prism, that’s all we need to do. now simply add, in the detailpageviewmodel, a parameter of type ishareservice in the class constructor, so that you can use it the command that will be invoked when the user will press the button to share the image. here is what our updated detailpageviewmodel looks like:

we have added an ishareservice parameter in the constructor and we have defined a delegatecommand called shareitemcommand : when it’s invoked, it will simply call the shareshirt() method exposed by the ishareservice interface, passing as parameter the name of the show and the url of the poster image (which can be both retrieved from the selectedshow property).

in the end, in the detailpage.xaml we have added a toolbaritem control, which adds a new button in the ui’s toolbar (which is rendered in a different way based on the platform - for example on uwp it’s rendered as a button in the commandbar ): 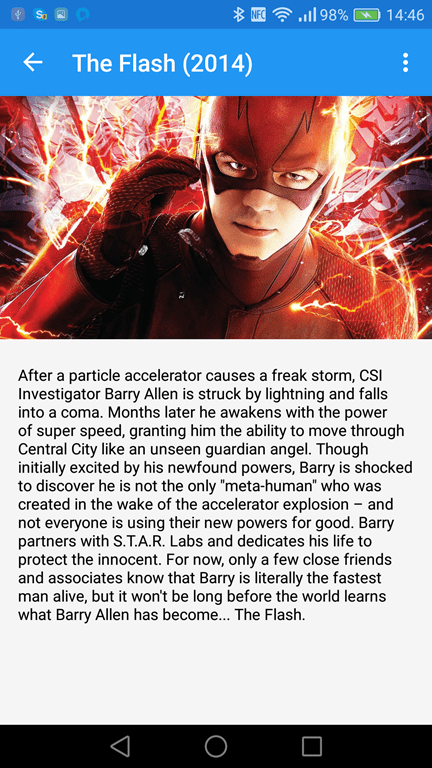 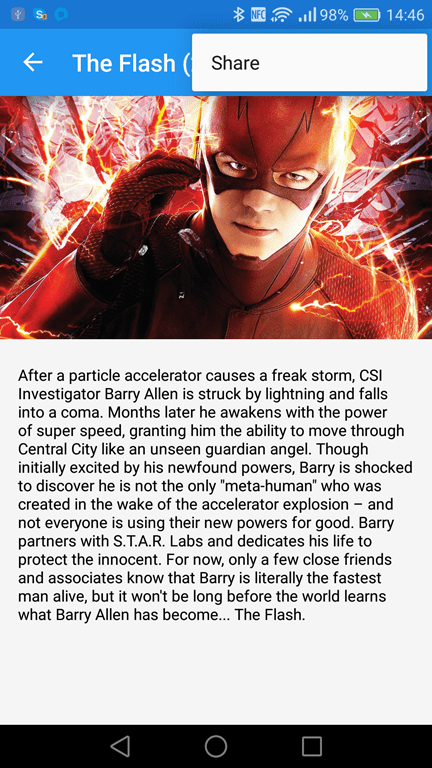 nothing special here: the control has a text and it’s connected through binding to the shareitemcommand we have previously defined in the viewmodel. now launch the application on an android device or emulator, choose one tv show and use the new share option we’ve just added: automagically, android will show us the share chooser, which will allow the user to choose which target application will receive the image. as you can see, we didn’t have to register anything related to the ishareservice in the app class: prism did everything on its own. of course, if we want to achieve the same result also when the app is running on ios or on windows 10, we need to create also an implementation of the ishareservice interface in the other platform-specific projects.

we have concluded our journey in learning how the most recent version of the prism framework has been greatly improved, specifically when it comes to support xamarin forms. thanks to prism and xamarin, it will be much easier to create great cross-platform applications using the mvvm pattern and leveraging the same skills you have learned as a developer by creating wpf, silverlight, windows store or uwp apps. as a final reminder, don’t forget that all the samples used in this series of posts are available on my github account: https://github.com/qmatteoq/xamarinforms-prism .