every programmer should study it; every system should mimic it; every project manager should print it out, slap on a wall, and say to developers, "that."

netty is an, "... an asynchronous event-driven network application framework for rapid development of maintainable high-performance protocol servers and clients," but that doesn't matter here, as we are not analyzing its behavior. instead, behold figure 1.


table 1: structural disorder of all programs reviewed in this series. 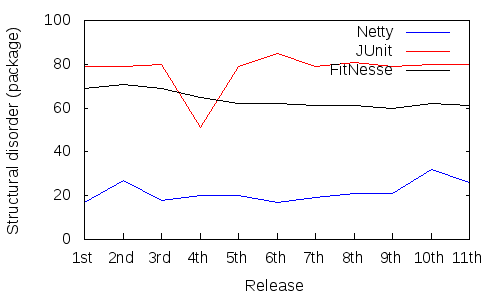 figure 2: netty's structural disorder through 11 releases (with others for comparison).

so, why is this package structure so good?

given a diagram like figure 1, we can ask two quick questions to evaluate — loosely — the depicted structure's merit.

in commercial software development, "good structure," simply means, "cheap to update." furthermore, evidence suggests what every programmer with a grasp of ripple effects knows: the more things x depends on, the more likely will be impacted by ripple effects and hence the more costly x might be.

thus, pick a package that heavily depends on others and ask:

figure 2 shows the nightmarish 90% structural disorder of jenkins , and then shows the highlighted transitive dependencies from the five packages (tool-tipped) that depend most on others.

tracing dependencies in jenkins clearly ... poses a challenge, with many packages depending on over 75% of the rest of the system.

figure 3 repeats the experiment, showing the transitive dependencies from the five netty packages that depend most on others: epoll, spdy, websocketx, http and nio .

figure 3: highlighting (in blue) the worst transitive dependencies in netty.

in striking contrast with jenkins, we can see the netty packages depended upon — and how few there are. netty has 55 packages, but the maximum depended upon by any other is just 12. that's just 22% of the system.

is netty's package structure perfect? of course not. particularly, the circular dependency between internal and concurrent creates regrettably strong coupling in that core internal/concurrent/channel/buffer/util package cluster.

looking beneath the surface, indeed, netty's class structure is bad. netty's designers apparently abandoned some of their excellent structural principles when they built their class-level. a shame.

but looking at that package structure ... wow.

finally, instead of analyzing netty's crucial releases, an architectural observation presents itself. netty's architects seem to have decided upon a rather brilliant deployment strategy. downloading netty gives you both an all-in-one jar file, but also 13 jar files that contain the separate parts of the system. presumably, you can load all netty or just the parts of it that you want.

one jar file, the "common" jar, houses the internal/concurrent/channel/buffer/util package cluster, whereas others hold, for example, "codec", "tcnactive", "transport", etc., suggesting that these latter jars are clients of the common jar but are not clients of one another and so have no dependencies on one another. thus, in their very deployment, netty's designers may have enshrined the separation and encapsulation of their sub-systems that has led to this industry-beating package structure.

the only remaining question is: why don't more projects follow netty's lead? why does jenkins have a 90% structural disorder? why didn't jenkins' designers properly partition their system to reduce inter-package coupling? why does the software development field so willingly accept the costs that these poor structures generate?

aren't we better than this?

if there were an annual award for the best java package structure in use today, netty would have won it seven years in a row.