As every developer knows, debugging an application can be difficult, and often enough, you spend as much or more time debugging an application as originally writing it. Every programmer develops their collection of tools and techniques. Traditionally, these have included full-fledged debuggers, instrumentation of the code, and tracing and logging. Each of these has their particular strengths and weaknesses.

Source-level debuggers like GDB, TotalView, and DDT operate outside of the address space of the programs being debugged and use special syscalls like ptrace to adopt processes and to read and write to the process’s memory. To allow debugging, they maintain external control over the processes and threads. This external control can be a slow process and unacceptably affect process performance because nearly every interaction requires round trips through the kernel and coordination with signals. The interface for debuggers to control processes was designed for a different era when processes didn’t have many threads and consequently these interfaces are not well suited to handling processes with many coordinating processes and threads.

For example, many of the debugging functions require quiescing at least some portion of the process. Just fully quiescing a process with ephemeral threads can be difficult or nearly impossible if the process being debugged is a complicated multithreaded state machine. One common problem is when bugs are caused by the interactions between the timing of threads the simple act of stopping of threads and process quiescing that debuggers need to do can make bugs disappear and become Heisenbugs.

Problems like those mentioned above have led many developers to fall back to the old standby of instrumenting their code. At the simplest level, this can be adding some kind of debug printing or logging at various points in the code. This is simple and effective and has the advantage that the debug tooling is written in the same language as the program. The instrumentation also has the advantage of having direct access to all the data and variables in a context where the instrumentation is inserted.

Though debug information and debuggers have gotten much better at debugging optimized code it still isn’t perfect, instrumentation has the advantage that it isn’t confused by optimizations or complex data representations. This advantage of local context and direct access to data can also be a curse because embedded instrumentation is limited by language scoping. If the data you want to present for debugging purposes isn’t accessible or is out of scope, unlike a source level debugger, embedded instrumentation can’t directly access it.

For all the simplicity of embedded instrumentation, it also introduces another set of problems. Do you leave the instrumentation or logging in production code and then turn it off or on with some type of mechanism? How do you select which part of the program you are going to debug? Where should this debugging output go? Will the receiving end of this information have the bandwidth and capacity to deal with the rate at which this information is generated? How do you provide enough synchronization and coordination that threads do not step on each other when writing their debug information.

To resolve many of the challenges presented by internal instrumentation while retaining almost all of their advantages, tracing frameworks have been developed. These are essentially libraries, which solve many of the challenging problems presented by embedded logging and internal instrumentation. For example, LTTng allows a developer to instrument code in a way that is low overhead for production code, but then selectively turn on and off various tracepoints as needed to debug a problem. It provides low overhead synchronization and coordination between threads writing data. It also has several mechanisms to receive the trace data and efficiently process it so that the transport and storage of the trace data isn’t overwhelmed.

Advanced tracing frameworks like LTTng are a huge step forward over simple embedded instrumentation but they still have some limitations. They can generate and pass through huge amounts of data, assuming that storage is no problem, finding the problematic interaction in the huge sheaf of recorded events and piecing together an understanding of the state of a complex application from the logged data can be quite difficult. This can be particularly difficult when the problematic effect and its root cause are temporarily dislocated. Furthermore, in spite of all the efforts of the designers of tracing frameworks like LTTng, there is still notable overhead in recording the traced events. They usually require a system call to write the data or at least synchronization on what could become a highly contested lock.

Programmatic debugging is a new paradigm in debugging that is emerging. It is designed to address many of the challenges affecting other debugging paradigms. The general concept is that you insert functions and control code into the process’s address space using the same syscall interface used by source level debuggers. This code is a special purpose debugger and written either to solve a particular problem or to illuminate a class of related problems. This debugging code can be inserted into a running process’s address space so it does not need to be coded into the program’s source code the way that instrumentation is. This allows it to be used without having to edit and recompile the original source.

By having the debugging code live in the process’s address space rather than being back in the debugger, there isn’t the latency of a signal and a context switch introduced when a monitored event is encountered. The event is handled in the context of the process and the thread and so components of the context such as lock state remain intact. This overcomes one of the bigger weaknesses of most source level debuggers, the latency of responding to events.

Another advantage of having a special purpose debugger running in the executing process’s address space is that it can directly access the process’s memory to both read and write it. This can be much faster than the numerous ptrace peeks and pokes and all their associated trips through the kernel to gather or modify data in a process.

When used as a form of smart instrumentation to code, this special purpose debugger can do data reductions at the source making sure that only truly interesting events are logged. This overcomes one of the biggest problems with tracing a large-scale application, managing the volume of data being generated. No matter how advanced the design of a tracing framework, at some point data reduction at the source is the only practical approach. This data reduction can include any logic that can be conceived and implemented in the context of the process. So one capability of programmatic debugging is that it can be fashioned into a kind of smart tracer, which applies logic to events before passing them along.

Programmatic Debugging: How It Works

Programmatic debugging must use the same tool interfaces that other debuggers have, it just applies them in different ways. First, you have to write some code to execute in the context of the process. This will be compiled just like any other function in a program but since it will be inserted into the address space of another process, it usually requires some special compiler flags.

Since only the most general purpose, programmatic debuggers don’t need to access program variables, these debugger functions need to be able to locate functions and variables. When these debuggers are being compiled, they locate the functions and variable using the debug information that was generated when the same target program was compiled. Locating variables this way gives them an advantage over embedded instrumentation in that they are not limited by the scoping rules of the language. If a variable is out of context in a function, it still can be found in the debug information so long as the proper scope is specified.

Finally, for this programmatic debugger to actually do anything it must be triggered somehow. Once again using the debug information about the target, it can find functions, lines of code and addresses and mutate the binary to redirect program control flow to the programmatic debugging functions. 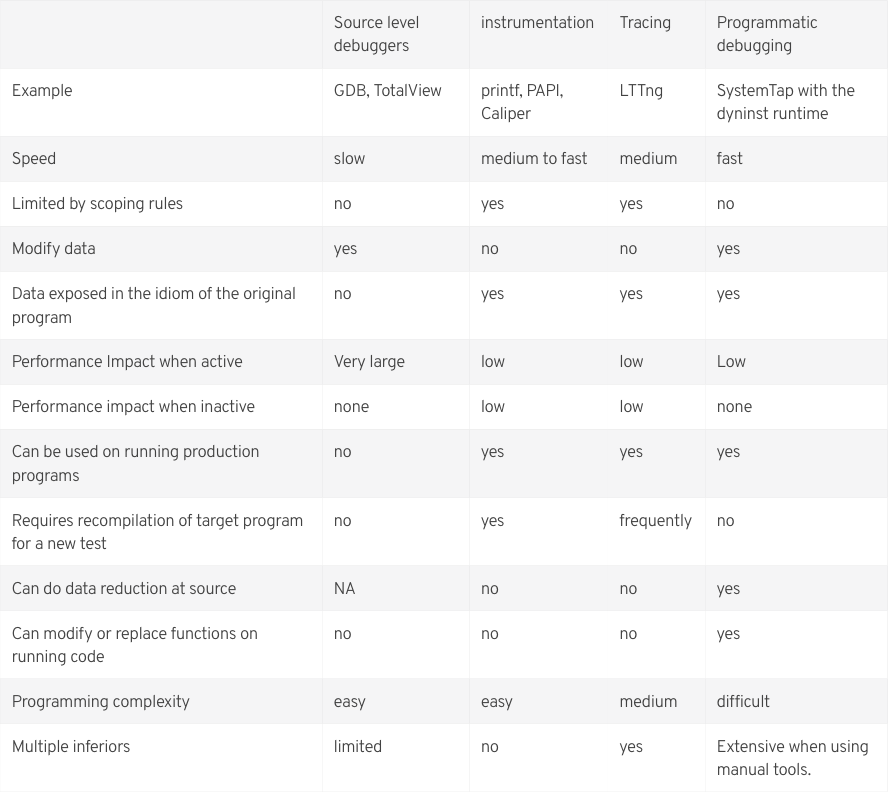 Programmatic debugging is an emerging paradigm for debugging. It seeks to overcome many of the limitations of other approaches to debugging and is especially useful for complex multithreaded and distributed applications. It allows programmers to write special purpose tools to debug applications as they run without modifying their source code or needing to recompile. Most of the time, it doesn’t suffer the overhead or the latency of the context swaps needed by other kinds of debuggers.

It allows direct access to variables that are out of scope at the point in the code where a targeted event happens. It also can be used to filter events down to only the most interesting ones at the source, therefore, bypassing some of the data transport or storage requirements that often are a challenge for tracers.

In part two of this series, I will show how userspace SystemTap can be used to quickly develop some simple kinds of programmatic debuggers.