having delivered a few talks myself, i started noticing trends and wanted to share them with you. i believe that if you build the right habits and create a plan to gear up for your talk, the likelihood that your performance will last in the memories of the audience will significantly increase. so, reflecting on the times when the audience was patiently listening to me… and the times when they counted the seconds to the end… and those one or two occasions when their eyeballs seemed to enlarge and almost pop just before the applause, i will share a few of my public speaking tips hoping that you will put them into action and deliver an outstanding presentation.

i’ve seen people make a joke or put on a silly hat to break the ice. these affectations may work but make sure to pick an inoffensive joke and try not to make a fool of yourself. being a joker is not a good first impression if you want to plant some serious ideas later on. at the end of your presentation, try leaving your audience with a question that will keep them thinking for a day or two.

don’t prepare a script and try to learn it by heart. having a few points on each slide to talk about, expressing them in simple language will put you on the right track. preparing slides is a beast on its own and i will not cover it here, but make sure that you don’t read from the slides — the audience is there to hear you speak, not to watch you read. and it should go without saying, avoid turning your back toward the audience.

pick images and examples that make most sense for the expected of audience. missing the target might be bad, but being too general is even worse. spend a little extra time to research what sort of people are likely to attend the event and who went on its last occasion.

people believe their eyes, and when you are telling a story your slides serve as a visual confirmation for your words. but if you really want to impact the audience, you will probably need to get your hands dirty and search your home, garage or ceiling for some unique objects that reinforce your ideas. i remember my talk on emotional design last year when i took out an apple peeler that looked like torture tool from the inquisition. it served its purpose well and stressed my point about the different aspects that drive user desire when purchasing a product. 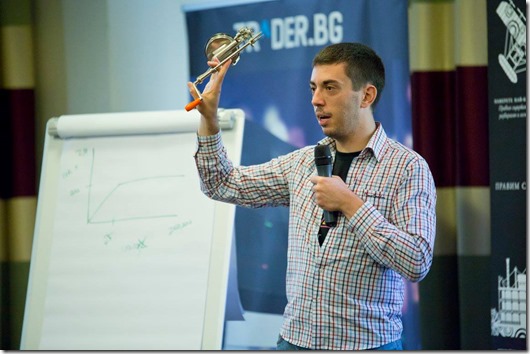 the author and his inquisition-like apple peeler. image attributed to: the ux sofia 2015 team.

it doesn’t have to be something special. something that anyone can find in their house is even better! what’s needed, however, is something that reinforces your ideas and arguments in a special way — a function of the object that people did not realize until this very moment.

these four tips are a good beginning, but i have many more observations to share, so expect a second part of this blog in the very near future. however, that does not mean you need to wait for it without taking action. if you have the opportunity, use these four tips now and let me know how it goes.

Published at DZone with permission of Stefan Ivanov. See the original article here.