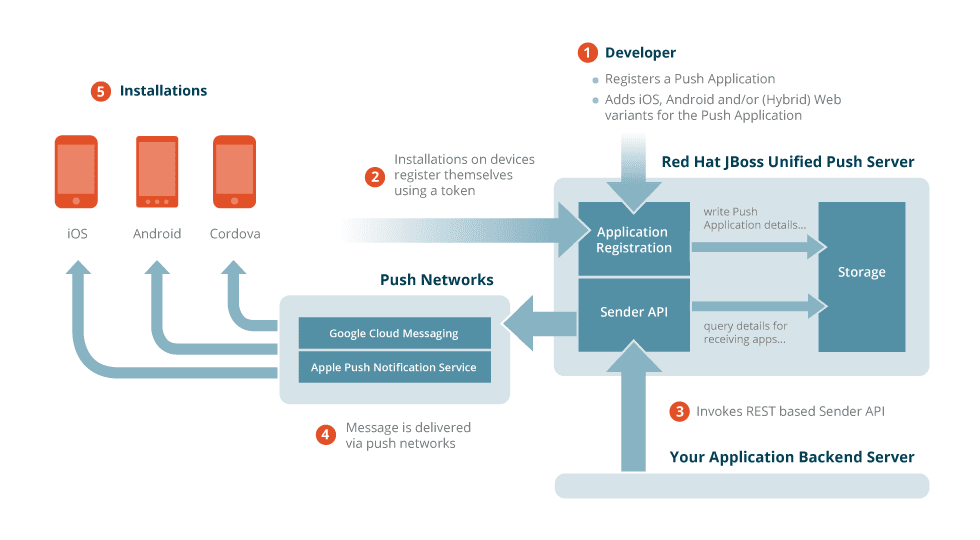 Architecture
The xPaaS offering is deployed in a managed EAP container, while the server itself is based on standard Java EE APIs like:

Another critical component is Keycloak, which is used for user management and authentication. The heart of the Unified Push Server are its public RESTful endpoints. These services are the entry for all mobile devices as well as for 3rd party business applications, when they want to issue a push notification to be delivered to the mobile devices, registered with the server.

Backend integration
Being based on the JAX-RS standard makes integration with any backend platform very easy. It just needs to speak HTTP...

Java EE
The project has a Java library to send push notification requests from any Java-based backend. The fluent builder API is used to setup the integration with the desired Unified Push Server, with the help of CDI we can extract that into a very simple factory:

Next we would need to inject the `PushSender` into a Java class which is responsible to send a push request to the Unified Push Server:

The API for the `UnifiedMessage` is leveraging the builder pattern as well:

Node.js
Being a restful server does not limit the integration to traditional platforms like Java EE. The AeroGear also has aNode.js library. Below is a short example how to send push notifications from a Node.js based backend:

What's next ?
The Unified Push Server on on xPaaS is supporting Android and iOS at the moment, but the AeroGear team is looking to enhance the service for more mobile platforms. The community project is currently supporting the following platforms:

There are plans for adding support for Safari browser and Amazon's Device Messaging (ADM).

Getting started To see the Unified Push Server in action, checkout the video below:

The xPaaS release comes with different demos for Android, iOS and Apache Cordova clients as well as a Java EE based backend demo. You can find the downloads here.
More information can be found on the Unified Push homepage.
You can reach out to the AeroGer team via IRC or email.
Have fun and enjoy!

If you find some more time and need a #coffee+++ make sure to watch the developer interview with Matthias about Openshift, Aerogear and how to bring Java EE to Mobiles.

_______________________
This is a guest post by Matthias Wessendorf (@mwessendorf, blog). He is working at Red Hat where he is leading the AeroGear project. Previously, he was the PMC Chair of the Apache MyFaces project. Matthias is a regular conference speaker. Thank you, Matthias!