this week we welcome paul logston ( @paullogston ) as our pydev of the week! paul is the new maintainer for pyvideo.org . he took over for will kahn-greene. you can read more about the transition here . he is also an organizer for his local python users group. you might want to take a few moments to check out his github profile so you can see what paul has been up to. let’s take some time to get to know him better!

went to uc davis for chemical engineering, studied improv in chicago after college, studied as an emt/phlebotomist to work as one while doing comedy. moved to new york, ny to continue doing comedy. taught cpr/bls/acls for a few years while doing comedy. then decided to change careers. decided to push for coding as i had done it all along as a hobby. after about a year of teaching myself python, i moved from ems education to working for 15five as a developer. the nyc python meetup was integral in my python education. without that group, i wouldn’t be were i am today. i now help organize that group and run saturday office hours along with some large talk nights and pygotham; nyc’s regional python conference. other hobbies include binge watching netflix originals, brewing kombucha, and teaching.

i knew php but i wanted a language that i could use to write a single backend for both websites and guis. i have yet to use python for that purpose, though.

yeah, the line between “know” and “i’ve put it on my resume as a language i know” is kinda blurry, but here’s a list of languages i could be efficient with if given a week or two of ramp up time.

i think c is my favorite. it's not my favorite to write (that’d be python by far), but c is just so much closer to the metal that you get that really hacker high when you write it. or at least i do.

wow. good question. i tend to not do favorites, though. those are hard for me and not worth the cost of determining. ones that i am really into recently though are asyncio and bokeh.

i think python is growing in a lot of different areas and i think several communities are making it their go-to language. no more so than teaching and data. i see python growing in all areas but the ground that it's taking in schools is amazing. java and c++ are being pushed out and replaced by python. also, as fun as r is (i’ve never used r), its hard to display the results of your work in r in an interactive way with a large number of people. i see people who want to write code for data analysis also wanting to write code for a quick web app to show their work. r is just not there (yet). in short, python’s easy of use, gentle learning curve, and versatility make it a great language to start with and to grow with.

yeah, it can be rough. on a micro level there tends to be 3 to 6-month spurts of hiring here in nyc, followed by slowness. i think we are in and towards the end of the spurt right now. i expect hiring to slow in about a month. plus the holidays are right around the corner so some slowness is a given.

on a macro level, i really don’t know. i don’t know if we are on top of a hill, a mountain, or if we just took our first toddler sized step up some playground stairs. all i can feel is forward momentum. and for the record, it feels good.

first, thanks for having me! secondly, i’ll use this time to shamelessly plug pyvideo.org. pyvideo.org is a globally used (see photo below) python video index. we are always looking for new submissions and are very grateful for those that come in. if you’re looking for an easy way to break into the open source community, feel free to submit a pr for one of the issues at https://github.com/pyvideo/data . thanks! 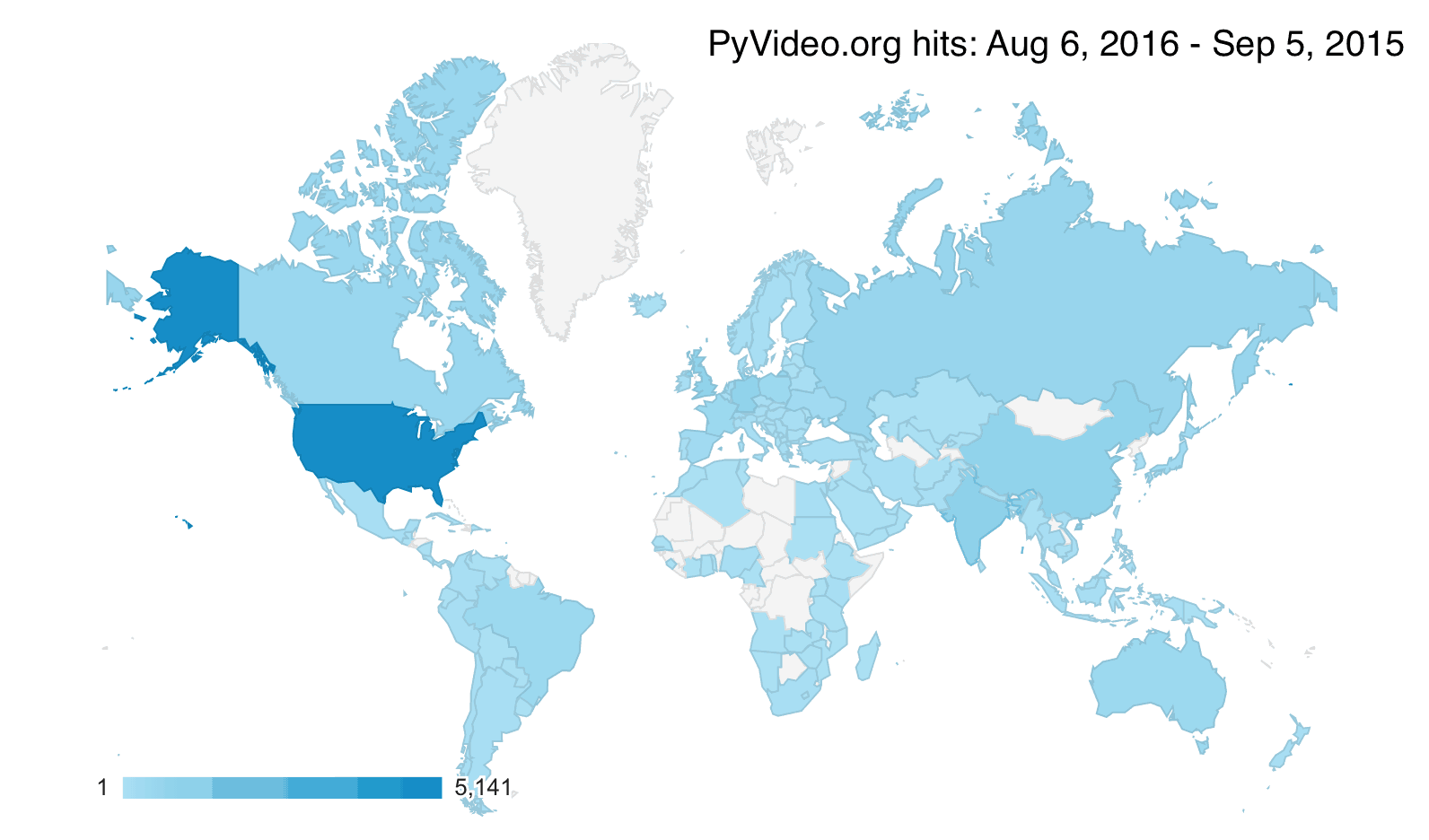