The asyncio module was added to Python in version 3.4 as a provisional package. What that means is that it is possible that asyncio receives backwards incompatible changes or could even be removed in a future release of Python. According to the documentation asyncio “provides infrastructure for writing single-threaded concurrent code using coroutines, multiplexing I/O access over sockets and other resources, running network clients and servers, and other related primitives“. This chapter is not meant to cover everything you can do with asyncio, however you will learn how to use the module and why it is useful.

If you need something like asyncio in an older version of Python, then you might want to take a look at Twisted or gevent. 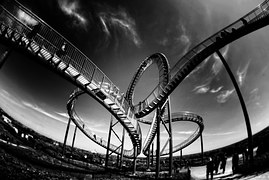 The asyncio module provides a framework that revolves around the event loop. An event loop basically waits for something to happen and then acts on the event. It is responsible for handling such things as I/O and system events. Asyncio actually has several loop implementations available to it. The module will default to the one most likely to be the most efficient for the operating system it is running under; however you can explicitly choose the event loop if you so desire. An event loop basically says “when event A happens, react with function B”.

Think of a server as it waits for someone to come along and ask for a resource, such as a web page. If the website isn’t very popular, the server will be idle for a long time. But when it does get a hit, then the server needs to react. This reaction is known as event handling. When a user loads the web page, the server will check for and call one or more event handlers. Once those event handlers are done, they need to give control back to the event loop. To do this in Python, asyncio uses coroutines.

A coroutine is a special function that can give up control to its caller without losing its state. A coroutine is a consumer and an extension of a generator. One of their big benefits over threads is that they don’t use very much memory to execute. Note that when you call a coroutine function, it doesn’t actually execute. Instead it will return a coroutine object that you can pass to the event loop to have it executed either immediately or later on.

One other term you will likely run across when you are using the asyncio module is future. A future is basically an object that represents the result of work that hasn’t completed. Your event loop can watch future objects and wait for them to finish. When a future finishes, it is set to done. Asyncio also supports locks and semaphores.

The last piece of information I want to mention is the Task. A Task is a wrapper for a coroutine and a subclass of Future. You can even schedule a Task using the event loop.

The async and await keywords were added in Python 3.5 to define a native coroutine and make them a distinct type when compared with a generator based coroutine. If you’d like an in-depth description of async and await, you will want to check out PEP 492.

In Python 3.4, you would create a coroutine like this:

When you define a coroutine in this manner, you cannot use yield inside the coroutine function. Instead it must include a return or await statement used for returning values to the caller. Note that the await keyword can only be used inside an async def function.

The async / await keywords can be considered an API to be used for asynchronous programming. The asyncio module is just a framework that happens to use async / await for programming asynchronously. There is actually a project called curio that proves this concept as a separate implementation of an event loop thats uses async / await underneath the covers.

While it is certainly helpful to have a lot of background information into how all this works, sometimes you just want to see some examples so you can get a feel for the syntax and how to put things together. So with that in mind, let’s start out with a simple example!

A fairly common task that you will want to complete is downloading a file from some location, whether that be an internal resource or a file on the Internet. Usually you will want to download more than one file. So let’s create a pair of coroutines that can do that:

In this code, we import the modules that we need and then create our first coroutine using the async syntax. This coroutine is called download_coroutine and it uses Python’s urllib to download whatever URL is passed to it. When it is done, it will return a message that says so.

You can also schedule calls to regular functions using the asyncio event loop. The first method we’ll look at is call_soon. The call_soon method will basically call your callback or event handler as soon as it can. It works as a FIFO queue, so if some of the callbacks take a while to run, then the others will be delayed until the previous ones have finished. Let’s look at an example:

The majority of asyncio’s functions do not accept keywords, so we will need the functools module if we need to pass keywords to our event handler. Our regular function will print some text out to stdout whenever it is called. If you happen to set its stop argument to True, it will also stop the event loop.

There is a related function called call_soon_threadsafe. As the name implies, it works the same way as call_soon, but it’s thread-safe.

If you want to actually delay a call until some time in the future, you can do so using the call_later function. In this case, we could change our call_soon signature to the following:

Once you have that, then you can just use the call_at function and pass it the time that you want it to call your event handler. So let’s save we want to call our event handler five minutes from now. Here’s how you might do it:

In this example, we use the current time that we grabbed and append 300 seconds or five minutes to it. By so doing, we delay calling our event handler for five minutes! Pretty neat!

Tasks are a subclass of a Future and a wrapper around a coroutine. They give you the ability to keep track of when they finish processing. Because they are a type of Future, other coroutines can wait for a task and you can also grab the result of a task when it’s done processing. Let’s take a look at a simple example:

Here we create an asynchronous function that accepts the number of seconds it will take for the function to run. This simulates a long running process. Then we create our event loop and then create a task object by calling the event loop object’s create_task function. The create_task function accepts the function that we want to turn into a task. Then we tell the event loop to run until the task completes. At the very end, we get the result of the task since it has finished.

Tasks can also be canceled very easily by using their cancel method. Just call it when you want to end a task. Should a task get canceled when it is waiting for another operation, the task will raise a CancelledError.

At this point, you should know enough to start working with the asyncio library on your own. The asyncio library is very powerful and allows you to do a lot of really cool and interesting tasks. You should check out http://asyncio.org/ which is a curated listing of various projects that are using asyncio. It is a wonderful place to get ideas for how to use this library. The Python documentation is also a great place to start from.