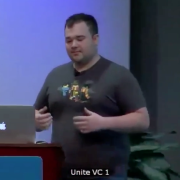 There is also a full video about Gradle Python at Linkedin from Gradle Summit 2015.

This presentation is a hands-on technical demonstration of how Gradle executes Python builds and provides a lot of detail about some of the nuances of how Linkedin uses Gradle as a Python build Automation system.

Gradle is a polyglot build automation tool that supports many programming languages. Historically, Gradle has been very strong in Java, C/C++ and it is now the official build system for Android. The community has been busily contributing many new language plugins and features including iOS, .Net Ruby, PHP, Javascript, Hadoop and many more. Linkedin supports an extreme polyglot environment with over 42 programming languages all built with Gradle. This integration comes in three tiers, where tier one is a deep language binding where Gradle understands the structure of the language and details about how it is built into executable packages like APK, WAR, EAR, JAR and many others. Linkedin also supports tier 2 and 3 integrations with Gradle. Linkedin has found Gradle to be the best Python Build Automation system because it fits in so nicely with their Enterprise build automation strategy.

In this case, Linkedin has contributed their Python plugin and are demonstrating how Linkedin uses Gradle for Python builds as one of the 42 languages they support using Gradle.

Want to attend the next Bay Area Gradle Users Meetup?

Check our event page to find out when is the next one.

Published at DZone with permission of Miko Matsumura. See the original article here.