In this post, you will learn about how metamorphic testing could be used for performing quality control checks/testing on Machine Learning models. It is primarily meant for data science specialists to plan the test cases to test the Machine Learning (ML) model implementation from a QA perspective.

The word "testing" is one of the conflicting technical nomenclatures given its usage by Machine Learning experts and software engineering community in general.

Conventional software application testing assumes the presence of a test oracle, which represents the fact that the output of software applications can be verified against the expected values by a tester or testing mechanisms such as automated tests. However, when the test oracle cannot be determined due to the absence of the same or complexity associated with the testing in terms of time and effort, there is the need for some kind of testing that does not assume or depend upon the notion of test oracle. This is where metamorphic testing comes into the picture.

Metamorphic testing allows making use of the properties of the application such that if the input associated with those properties are modified in a certain way, it should be possible to predict the new output, given the original output. This approach is what is known as metamorphic testing.

The testing compares the input and output to determine the correctness of the implementation. This is also termed as pseudo-oracle.

The key to implementing metamorphic testing is to determine or identify the metamorphic relations (MR s).

The metamorphic testing makes use of metamorphic relations for coming up with test plans (comprising of test cases), which can be used for testing the Machine Learning models. Metamorphic relations represent a set of properties that relate multiple pairs of inputs and outputs of the target program/application. Let's try and understand the same with examples.

In the diagram given below, hypothetically speaking, a property (the feature of the model) such as age relates inputs with outputs of the ML system. The output of the ML model (Y) is the likelihood estimate of a person suffering from a disease and the input parameter is age (X). As the age increases and is given other important features, the likelihood of a person suffering from the disease increases. Thus, there is established a metamorphic relation between input (age) and the output (likelihood estimate of suffering from the disease). 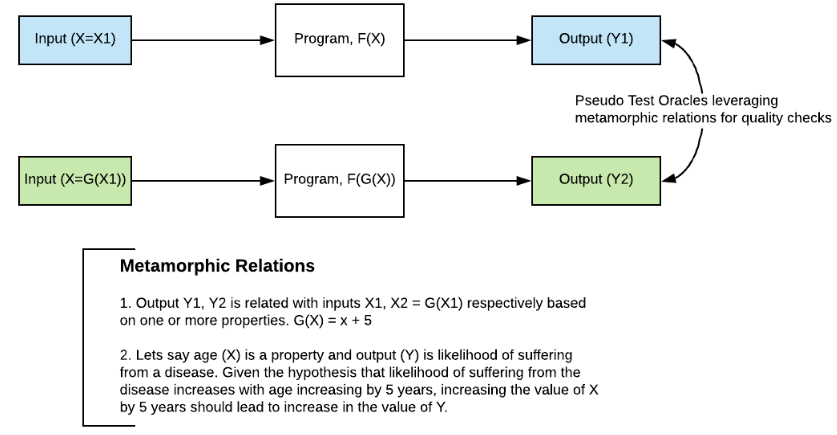 Given the example discussed in the above diagram, a set of test cases can be planned (test plan) in the following manner:

For coming up with the metamorphic test plan for doing quality checks on ML models, the following would be needed:

Let's try and understand as to why we need to perform metamorphic testing for doing quality checks on ML models.

In conventional QA testing, the software output is verified against the expected outcome, which is known beforehand. This is also known as "oracle" or "test oracle." The presence of test oracle in software application development is a frequently invoked assumption saying that the output of an implementation could be verified against expected values by testers or testing mechanisms such as automated test programs.

In the case of Machine Learning models, the assumption regarding the presence of the test oracle cannot hold true. Machine Learning models can be categorized in the class of scientific software, which are used to create answers or generate new answers (not known beforehand) based on a set of input values. As each of the outputs can be unique and cannot be verified against "so-called" expected values, there needs to be some mechanism to test the output of the ML models. However, when "testing" the model is spoken about, it is often referred with the scenario during the development (model building) phase when data scientists test the model performance by comparing the model outputs (predicted values) with the actual values. This is not the same as testing the model for any input where the expected value is not known.

As described in the earlier section, once one or more metamorphic relations are determined, it becomes simpler to come up with test cases which could be used to verify the correctness of ML models predictions. These test cases could be made part of the automation based on the following:

The automation could be achieved with scripting and programming languages. It could be run as part of continuous integration/delivery workflow steps (tools such as Jenkins) of build and deployment automation.

You may want to check some of the following related articles published on QA and Machine Learning:

In this post, you learned about applying metamorphic testing to assess the quality of Machine Learning models. In case you are a quality assurance (QA) professional or a test engineer, you could suggest and apply this technique to plan the test cases and test plan for doing quality control checks on Machine Learning models built in your organization. Please feel free to share your comments or suggestions or share in case you liked the post. Thank you!