In my previous article, I introduced the Dispatch Router from the Apache Qpid project, its main features, capabilities and the scenarios where it could be useful in order to develop high scalable AMQP based messaging solutions.

The first step for starting to use the router is the installation step and I’ll explain how to do that in this short post. I’ll use some personal Docker files in order to build fully functional images but you can find the official ones in the router GitHub account here.

This router is based on the Qpid Proton project, a messaging library developed in C, C++ and Java (pure ProtonJ implementation) with bindings for other different languages like Python, PHP, and Ruby. In order to work properly, the router needs only the base ProtonC implementation and the Python binding.

First of all, we need the main compiler tools like gcc, cmake, and make. The UUID library is needed for unique identifier generation (i.e. container name, message id, …) and the OpenSSL library for encryption and for handling SSL/TLS connections. Furthermore, the last library version leverages on the Cyrus library for the SASL protocol used for supporting different authentication mechanisms on the AMQP protocol.

To simplify the installation process, I wrote two Docker files available here on GitHub both for Fedora and Ubuntu. You can use these as a reference for reproducing the steps on your machine or to generate a Docker image.

The Qpid Dispatch Router uses the same tools (like gcc, cmake, make, …) needed for Qpid Proton; if you can compile the messaging library without problems then you are ready to compile and install the router as well.

This article uses the official released version, 0.5, with the 0.6 version under beta. We can use both of these versions. In the former case we can download the released package, in the latter we can clone the official GitHub repository and recompile the bits from there, so we have the latest updated code and features under development. The new 0.6 version has gone through major architectural changes to make it highly scalable. Furthermore, the router configuration is now more intuitive and easy to understand than the previous versions.

Even in that case I wrote both Docker files for the official released version and for compiling the bits (on both Fedora and Ubuntu of course) in order to have a Docker image and the router up and running in a related container.

To check the installation process, we can start the router with the simple “qdrouterd” command. It is launched automatically in the case of starting the Docker image.

Typing that command, the router starts with the default configuration file. We will dig into in the next articles to understand the meaning of all main available configuration options for tuning the router behavior.

In the above output, the main points are:

Other then the router itself, the project provides a couple of tools useful for showing main running information and for interacting with it.

As we can see from the above picture (-l option is for showing router AMQP links), the router is exposing the $management endpoint and a local temporary endpoint that is used for communicating with the qdstat tool.

Indeed, when we start the tool, it opens an AMQP connection to the router and attaches a link on the management endpoint for sending requests as you can see in the following picture with traffic capture (using Wireshark).

At same time another link is attached for a temporary local endpoint used for receiving information to show on the console.

When the tool sends a request to the router through a transfer performative, it specifies the local reply address using the “Reply-To” AMQP property.

The “qdmanage” tool is a general purpose AMQP management tool that we can use to interact with a running router and change its internal configuration. It’s very useful because even if our router starts with a static configuration written in the related file, we can change it dynamically at runtime to adapt the router behavior to our ongoing use case.

For example we can show all the active connections on the router. 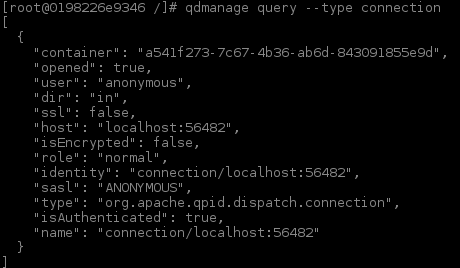 In this case, there are no connections other than the one related to the tool itself which connects to the router via AMQP in order to query and receive the related information.

With this post now we have installed the dispatch router stuff on our machine (or on a Docker image) and checked that it runs properly with the default configuration at least. We peeked the tools available with the installation and all related operations and information provided in order to interact with the router at runtime. Starting from the next article we’ll see how to use the router in different scenarios with an increasing complexity, from a standalone router to a routers network.