i was eating dinner with hugo kornelis and we started talking about query hash values. you know, like everyone does at dinner. as we talked about it, i suddenly thought about both plan guides and the query store. i wondered what happened to the query hash values in that case? thus, our blog post is born.

the behavior of the query hash itself is fairly straight forward. the text of the query is run through a hashing algorithm within sql server and a value comes out, so these two queries:

things get interesting if we create a plan guide for the first query to make it behave like the second query:

now, what happens when we toss in the query store?

traditionally, in the query store, forcing a plan isn’t changing anything except the plan, so what you’ll see is the original query hash value. however, things get a little off when we start forcing plans on queries that have plan guides. i’ve blogged about this before, you’ll get the plan from query store, but you’ll get the properties showing that both the plan guide and plan forcing are both in use. let’s force the plan and see what happens.

are you sitting down?

what i expected would happen is that we would see the query hash value go back to the original value. however, look at this screen capture from the select operator of my execution plan: 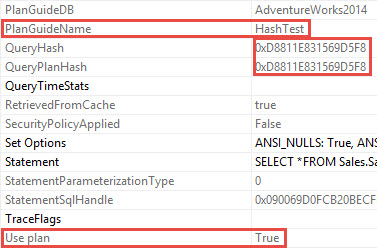 clearly, the behavior, at least in all the testing i’ve done and read about, is that plan forcing overrides plan guides. fine, but clearly there’s some housekeeping around the plan guides that is incomplete. part of that is right there in the query hash value. sql server can’t use the value from the plan guide text because it’s wrong, but it must not generate a new value. rather than leaving it blank (although, why not leave it blank), it copies the query plan hash value.

what’s this mean for production servers and your day-to-day existence? not much… unless you’re querying for the query hash value out of the dmvs while using plan guides and query store with plan forcing. in that case, you may have some issues tracking down everything you expect to see under normal circumstances.