In order to compare the two plans, first, we need a query. Here's a stored procedure that I'm going to use to generate a plan that will be in cache and in the query store:

With the two plans available, I'm going to use the Showplan Comparison utility in SQL Server Management Studio (17 or greater). Here are the two resulting plans: 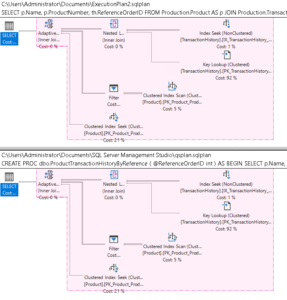 You can click on that to make it bigger if needed. However, you can see from the highlighted regions that these plans are identical... except that first operator is not highlighted. Let's look at the properties of that operator: 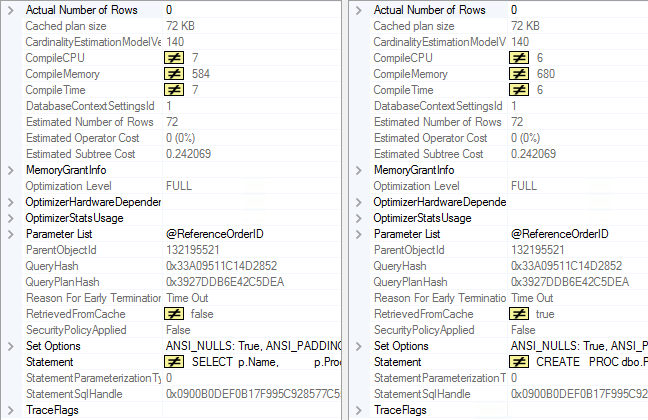 As you can see, while the structure of the plans is identical, not everything is. The Compile values are different (although sometimes, they'll be the same, that one is kind of luck of the draw to a degree) because they were compiled at different times with varying load on the system, so certainly that will be reflected. However, the other differences are also interesting. Which of the plans was retrieved from the cache, for example, and, more importantly, the statement for the plans? The one on the left is the plan from the Query Store. It was not retrieved from the cache, and the statement is for the query, not the stored procedure. Meanwhile, the plan on the right is from the cache, and it's based on the plan handle from the stored procedure, so it reflects that in the Statement value.

There are other differences in the plan as well. If you look at the Filter operator, the predicate values have some different probe definitions. These are simply variations caused by the optimization process. They don't register as full-blown differences in the plan comparison, hence the pink outline covers all the operators. However, they are still different values.

What does all of this mean? Is the implication that you can't trust one or both of these plans to accurately reflect reality? No. Not at all. Instead, the key takeaway is that you may see some small variations between a plan pulled out of the cache and a plan pulled out of the query store. The answer as to why is really quite simple. Each plan represents a precise moment in time. Given tiny differences, you may see a little more or less CPU time and other variable factors change.