An in-memory data grid (IMDG) is a set of networked/clustered computers that pool together their random access memory (RAM) to let applications share data with other applications running in the cluster. Though IMDGs are sometimes generically described as a distributed in-memory data store, IMDGs offer more than just storage. IMDGs are built for data processing at extremely high speeds. They are designed for building and running large-scale applications that need more RAM than is typically available in a single computer server. This enables the highest application performance by using RAM along with the processing power of multiple computers that run tasks in parallel. IMDGs are especially valuable for applications that do extensive parallel processing on large data sets.

What Is an In-Memory Data Grid?

Where would you draw the line between a data store and a cache? Persistence? Hazelcast allows you to write your in-memory data on disk. Derived data vs. source of truth? If the cost of creating the data is cheap, why would you persist them? Let's agree that there's no clear-cut defining property but a blurry continuum between those two concepts.

The raison d'être for caches is two-fold: performance, data is available faster, and availability, data is "always" available (at least the availability is higher than the underlying store). Therefore, it stands to reason queries would benefit from the same properties. You may argue that caches are key-value stores: they shine when retrieving an entry by its key. However, if you execute a query, you'd need to iterate entry by entry, something akin to a full table scan in a SQL database. The performance would be abysmal, even more so if your cache is distributed like Hazelcast.

And yet, sometimes, the underlying store offers no straightforward query mechanism either. Think about a Kafka topic or a web service.

In this post, I'd like to describe how you can take advantage of Hazelcast to query your cached data in different ways and still be fast.

Our Use Case: Collecting User Interactions

Collecting user interactions with the application is the first step when you want to improve your application. Whether it's documentation to make it more relevant or e-commerce to increase your sales, so-called "clickstreams" can be seen as the new oil. We will use a (significantly) simplified click-collecting application architecture:

In a real-world setup, we probably would want to store the event data in a persistent store, e.g., a Kafka topic or a MongoDB instance. We would then capture the inserts via a Jet pipeline to load the Hazelcast cluster. In the context of this post, it would only make the architecture unnecessarily complex. We can tentatively model the structure of an event with the following attributes:

When users interact with the application, the front-end will send a JSON payload that contains client-related data to the server. The server will also enrich the JSON with server-related data, e.g., IP and session ID, and store the complete JSON in a Hazelcast IMap. The key is not that important; the value is the JSON. Now, our marketing team wants to query the data to understand how users interact with our application.

The Predicate API is the one that predates all other ways presented in this post. The idea behind it is that it will serve as a filter before returning the values of an IMap. Before going further, we need to understand what it means to query a distributed system. From the documentation:

That being said, it's time to query! Here's the code to select all values that match a component's name:

The above is Java code, but all of our clients do offer the Criteria API. Unfortunately, if you run the code as-is, values will be empty even though some values match. The reason is that by default, Hazelcast stores values as bytes arrays. Thus, it has no understanding of the underlying format. The fastest way to fix the issue is to wrap the JSON value into a HazelcastJsonValue object. On the "put" side, we need to replace the first line with the second one:

On the query side, the only change is to update the generic type of the collection:

The Shape of Stored Data

Using HazelcastJsonValue means we are still storing data as JSON-formatted Strings. While some language ecosystems favor the usage of JSON, e.g., JavaScript, some others favor the usage of dedicated data structures, e.g., Java and Go. If developers on different language stacks use your Hazelcast cluster, you need to store the data in the most "consumable" shape. Enters PortableAnother data serialization format that is query-friendly. With Portable, you need to

Let's keep the storage part in Python and the query part in Java. Here's the Python code:

On the Java side, we can avoid creating the class by using GenericRecord. As its name implies, it's generic. Hence, we can query the data without having the definition of a Java Analytics class on the classpath! Again, the change is straightforward:

In both cases, you can access a field by its name:

Indexing data is not (only!) related to databases and how one stores data on disk. If you already know about indexes, please feel free to skip this introduction. Key-Value stores, such as Hazelcast's IMap, provide fast key-based access: that's their raison d'être. However, to query the value - or part of it, the engine needs to:

While it's faster to execute the flow in-memory than reading from a disk, it's not optimal. The solution is to create a dedicated data structure that stores additional information: an index. You can imagine an index as a sort of Key-Value store. The key is the value of the attribute, and the value the collection of keys from entries whose attribute's value matches the value. 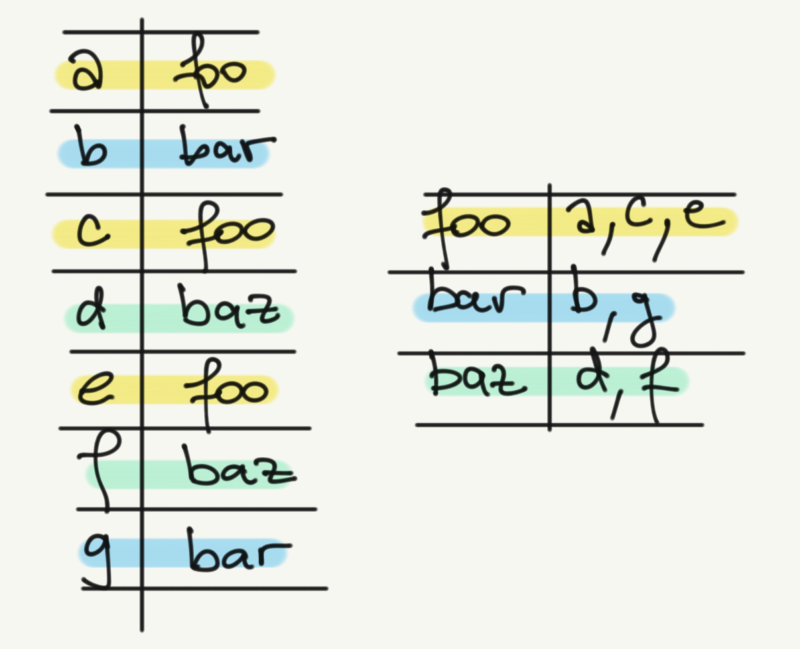 Now, when we query for entries whose value match "foo", the engine will look at the index, locate the key "foo", read the value, and look for entries whose keys are "a", "c" and "e". Of course, this is a pretty simple example. Since Hazelcast allows you to store complex values such as JSON and Portable, you can set an index on any attribute (or nested attribute). 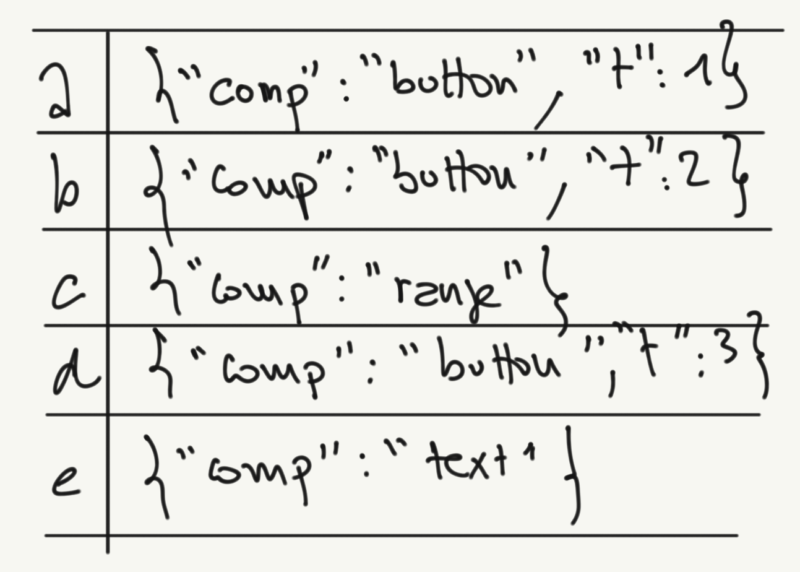 The above explanation caters to exact matches. Imagine that we want now every entry whose "t" is above a certain threshold, e.g., entry.get("t").lessThan(2). For this usage, we need a sorted index. A sorted index keeps its keys, well, sorted. The engine will go through the keys in order, and once it has reached a key that doesn't match the predicate, it will return the results. Finally, for queries that involve multiple attributes, we need a compound index that contains all attributes. Here's such a query:

The relevant index configuration would be:

At this point, we know how to query an IMap with the Criteria API and make it fast with the proper index configuration.

As a Java developer, you might already be familiar with SQL and JDBC. Learning a new API might feel like a roadblock. The good news is that Hazelcast now offers a JDBC driver. To use it:

That's all! The icing on the cake, you can use SQL in other language stacks (without JDBC, obviously). At the time of this writing, it still uses part of the Criteria API, but we intend to move it outside. The above code can be rewritten in Python like the following:

In this post, we went through several core concepts covering querying your data on Hazelcast:

The complete code for this post is available on GitHub.