When it comes to selecting a preferable data analysis language, I believe most of you will agree with me that R and Python should be talked about at the same time. It is very hard to pick one out of these two amazingly flexible data analytics languages.

I can confess that I have yet to pick the best out of these two data scientist delights. Therefore, to make things interesting, I will be presenting some curated information about these two languages and will leave the decision-making in the hands of my readers. It is worth mentioning that there are multiple resources available to understand the strengths and weaknesses of both the languages. However, in my opinion, there is a strong relationship between these two languages. 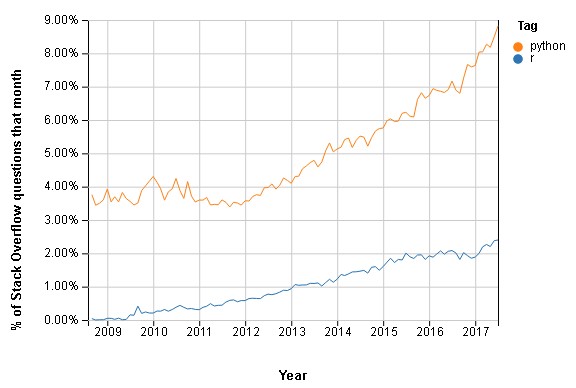 The above graph shows how these two languages have trended over time based on the use of their tags since 2008, when Stack Overflow was founded.

While both R and Python are competing to be the data scientist’s language of choice, let’s look at their platform share and compare 2016 with 2017 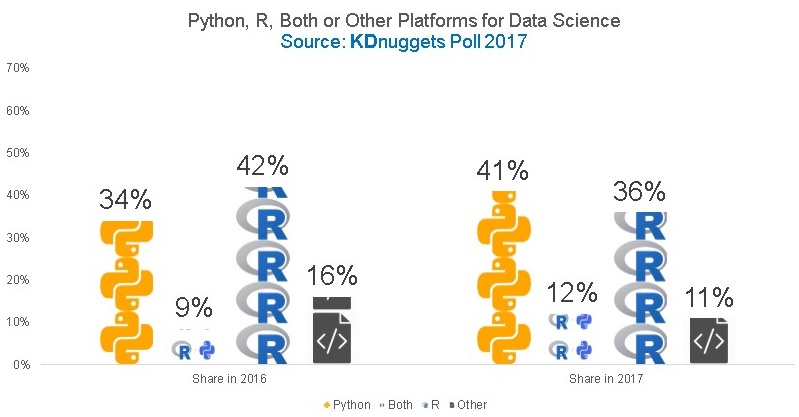 Now, it is time to look at these two languages from the perspective of their usage, data handling capabilities, task and ease of installing, and getting started with them.

R wins hands down when it comes to performing exploratory statistical analyses. It is considered to be easy for beginners. Statistical models can be written with few lines of code. Python as a full-fledged programming language can be a great tool to deploy algorithms for production use.

R is handy when it comes to a multitude of packages for both coders and non-coders to not only perform statistical tests but also to create machine learning models.

Python has had its own challenges related to data analysis. However, after the introduction of NumPy, Pandas, and a few others, it has started gaining a lot of popularity in the field of data analytics, as well.

How to Get Started

For R, you need IDE R Studio. For Python, there are many Python IDEs to pick from. However, the Spyder and IPython Notebook are the most popular ones.

Let's look at popular packages and lbraries for R and for Python, for coders and non-coders alike.

These are full-blown GUI packages that can help in performing amazing statistical and model creation routines.

Orange Canvas 3.0 is an open-source software package released under GPL. It uses common Python open-source libraries for scientific computing such as numpy, scipy, and scikit-learn.

As I mentioned at the start of this article, there is a strong tie-in between R and Python, and both of these languages are gaining popularity day-by-day. And to make it even harder to pick which one is better, the integration of these two languages has caused a lot of positive and collaborative ripples within the data science community.

Day-to-day users and data scientists are getting best of both worlds, as R users can run a rPython package within R to run Python code from R, and Python users who are using RPy2 library can run R code from within the Python environment.