late last year i turned the venerable age of 40, and graying and balding jokes aside, i've spent a good bit of time reflecting on the accelerating pace of change in technology. it's not just that things are getting faster, better, cheaper. it's that whole new capabilities are now possible that we could only dream about even a few decades ago. mail is electronic. a tv and a computer are basically the same thing. and you can talk to your phone.

that last field is where i work. i've spent the last twenty years making software and content more useful with ai-based technologies. when i started, our algorithms would take hours, days, even weeks to run. the problems we were tackling – finding the next cancer drug or discovering how biological molecules worked – were important enough to justify an extreme amount of patience. but for the average consumer product, we would all have moved on before any of these algorithms were finished.

as an example, extracting meaning out of digital text is useful for a variety of applications, from categorizing, tagging, and searching anything from email to corporate documents, all the way to electronic discovery during litigation. but the task of deciphering what we humans mean is devilishly hard. the state of the art just ten years ago was still laughable and not worth much more than a nerdy parlor trick.

it's why in the mid-2000's my team at a global content provider rolled our own capability to extract keywords, locations, and peoples' names from legal documents. we spent six months and about $150,000 in people costs for just this one capability, and while it was better than what was available off the shelf, it still left much to be improved.

fast forward just ten years and the landscape is vastly different. multiple capabilities from ibm, apple, google, amazon and microsoft exist to convert speech to text and back, extract concepts and entities from documents, and a host of other analytics, all accessible from the cloud and for less than a cent a document. the quality and speed is far superior to what we produced on our own, and because the algorithms are constantly learning as they work, they continue to improve. machine learning has become a consumable service, like power and internet access.

that's all well and good, but you still need to be a proficient programmer to take advantage of these apis. they all have their nuances and quirks, and each is different enough that you need to understand programming languages like python and detailed concepts like json data structures to use them.

that's where data applications come to the rescue. by building visual, interactive front-ends on top of these apis, you can enable subject-matter experts, who aren’t programmers, to leverage the tech boom. rapid iteration puts the application in the hands of end-users much faster than those ten years ago, which were practically the stone ages by comparison.

i recently built an application that takes text, analyzes it using ibm watson, and displays the most relevant concepts, tones, people, and companies. it took less than one day to build. one day. contrast that to six months and $150,000 to accomplish essentially the same thing ten years ago.

try it out. just copy and paste some text into the text box below and click the button. the word cloud will show you items that watson discovered, coloring them by type and giving more prominence to those with higher relevance scores.

note: the application is only pictured below, but doesn't function on dzone; clicking on it will take you to the actual application that is fully functional and embedded in the original blog post . 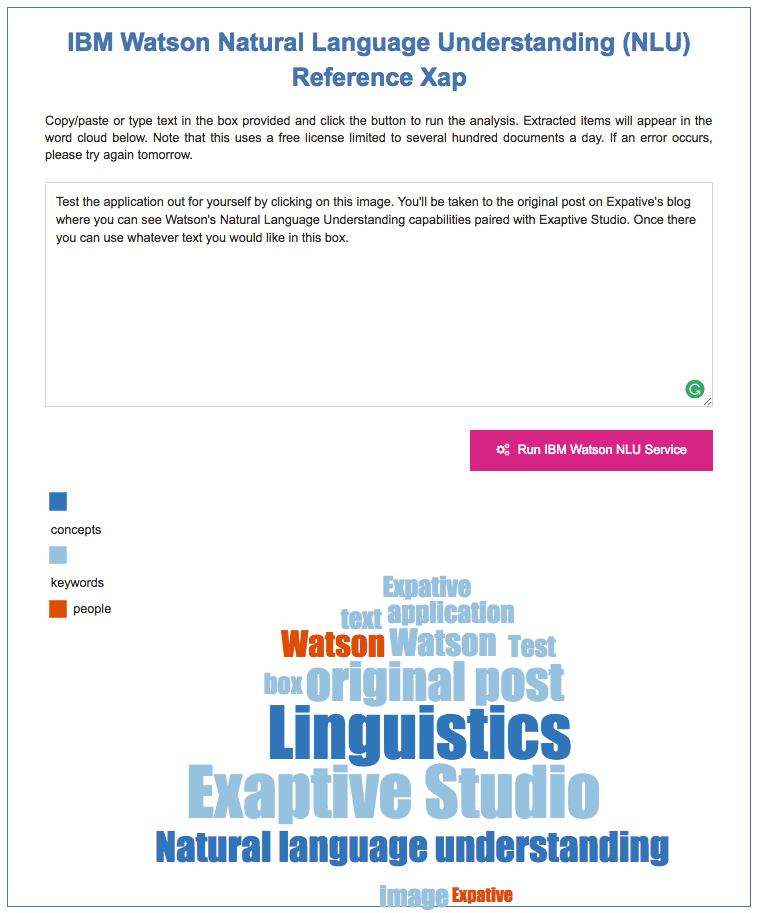 while it's not a production-grade web application ( we build those too ), it demonstrates the potential. one day and a blog post and you get to kick watson’s tires! the barriers to entry for innovation are now so much lower that a whole new group of would-be entrepreneurs can test a concept with minimal investment of time, energy, and money. if we've come this far in my first 40 years, imagine what the next 40 years will hold for technology and humanity.

if you'd like to try out our ibm watson and other data analytics components and rapidly build your own data applications, sign up for a free community edition of exaptive with this link , which adds this xap and related components to your studio so you can get started quickly.