One of the major features coming up in RavenDB 4.1 is the ability to do a cluster-wide transaction. Up until this point, RavenDB's transactions were applied at each node individually and then sent over to the rest of the cluster. This follows the distributed model outlined in the Dynamo paper. In other words, writes are important, always accept them. This works great for most scenarios, but there are a few cases where the user might wish to explicitly choose consistency over availability. RavenDB 4.1 brings this to the table in what I consider to be a very natural manner.

Here is the command that is sent to the server. 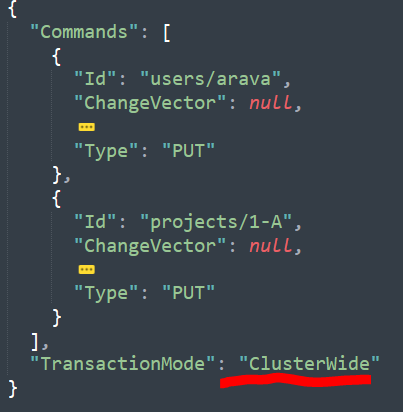 RavenDB ensures that this transaction will only be applied after a majority confirmation. So far, that is nice, but you could do pretty much the same thing with write assurance, a feature RavenDB has for over five years. Where it gets interesting is the fact that you can make the operation in the transaction conditional. They will not be executed unless a certain (cluster wide) state has an expected value.

Remember that I said that cluster-wide transactions build upon the compare exchange feature? Let's see what we can do here. What happens if we wanted to state that a user's name must be unique, cluster-wide. Previously, we had the unique constraints bundle, but that didn't work so well in a cluster and was removed in 4.0. Compare exchange was meant to replace it, but it was hard to use it with document modifications because you didn't have a single transaction boundary. Well, now you do.

Let's see what I mean by this:

As you can see, we have a new command there: "ClusterTransaction.CreateCompareExchangeValue." This is adding another command to the transaction. A compare exchange command. In this case, we are saying that we want to create a new value named "usernames/Arava" and set its value to the document ID.

Here it the command that is sent to the server: 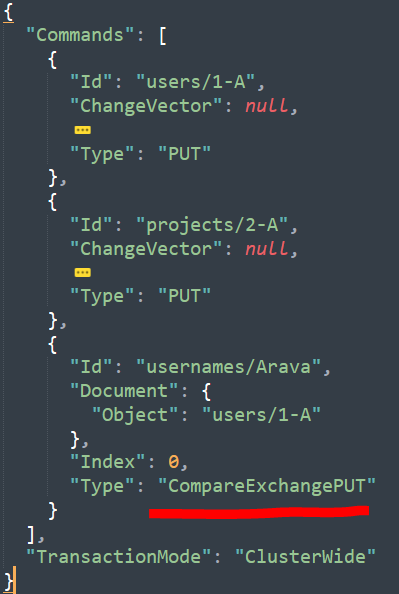 At this point, the server will accept this transaction and run it through the cluster. If a majority of the nodes are available, it will be accepted. This is just like before. The key here is that we are going to run all the compare exchange commands first. Here is the end result of this code:

We add both the compare exchange and the document (and the project document not shown) here as a single operation.

Here is the kicker. What'll happen if we run this code again?

You'll get the following error:

Nothing is applied and the transaction is rolled back.

In other words, you now have a way to provide consistent concurrency check cluster-wide, even in a distributed system. We made sure that a common scenario like uniqueness checks would be trivial to implement. The feature allows you to do in-transaction manipulation of the compare exchange values and ensures that document changes will only be applied if all the compare-exchange operations (and you have more than one) have passed.

We envision this being used for uniqueness, of course, but also for high-value operations where consistency is more important than availability. A good example would be creating an order for a seat in a play. Multiple customers might try to purchase the same seat at the same time, and you can use this feature to ensure that you don't double book it.* If you manage to successfully claim the seat, your order document is updated and you can proceed. Otherwise, the whole thing rolls back.

This can significantly simplify workflow where you might have failure mid-operation by giving you transactional guarantee around the whole cluster.

* Yes, I know that this isn't how it actually works, but it is a nice example.