I was pointed at this blog post, and I thought that I would comment from a RavenDB perspective.

If you don’t know how to tie your shoes, don’t run.

The actual details in the posts are fascinating, I’ve never heard about this Diaspora project. But to be perfectly honest, the problems that they run into has nothing to do with MongoDB or its features. They have a lot to do with a fundamental lack of understanding on how to model using a document database.

In particular, I actually winced in sympathetic pain when the author explained how they modeled a TV show.

They store the entire thing as a single document:

Hell, the author even talks about General Hospital, a show that has 50+ sessions and 12,000 episodes in the blog post. And at no point did they stop to think that this might not be such a good idea?

A much better model would be something like this:

What I do know is that having a single document that large is something that I want to avoid. And yes, this is a somewhat relational model. That is because what you are looking at is a list of independent aggregates that have different reasons to change.

Later on in the post, the author talks about the problem when they wanted to show “all episodes by actor”, and they had to move to a relational database to do that. But that is like saying that if you stored all your actors' information as plain names (without any ids), you would have a hard time handling them in a relational database.

Now, as for the Disapora project issues: They appear to have been doing some really silly things there. In particular, let us store store all the information multiple times: 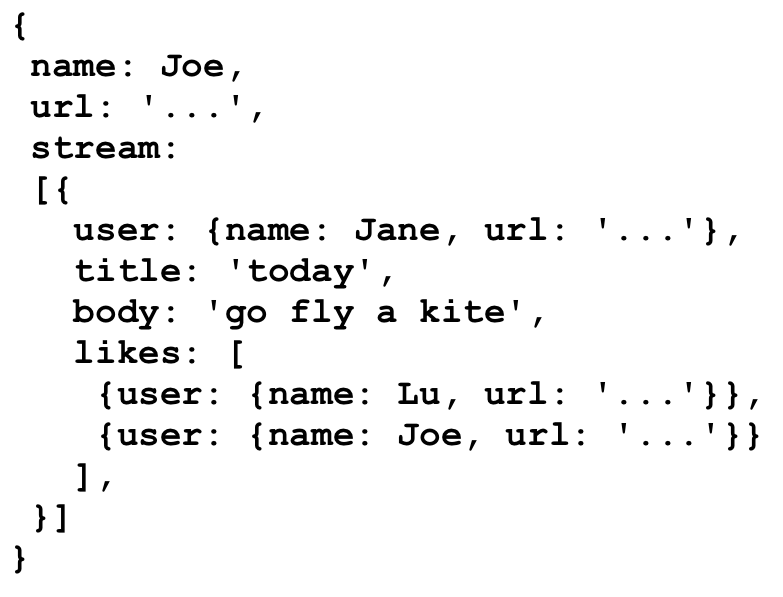 You can see, for example, all the user information being duplicated all over the place. Now, this is a distributed social network, but that doesn’t call for it to be stupid about it. They should have used references instead of copying the data.

Now, to be fair, there are very good reasons why you’ll want to duplicate the data, when you want a point in time view of it. For example, if I commented on a post, I probably want my name in that post to remain frozen. It would certainly make things much easier all around. But if changing my email now requires that we’ll run some sort of a huge update operation on the entire database… well, it ain’t the db fault. You are doing it wrong.

I am sorry, but this is the dancer blaming the floor.