So in case you hadn't heard already, IBM is set to buy Red Hat.

In that article, I made the statement:

In short, there are some very happy campers wearing red fedoras right now.

I was referring to upper management (who tend to be the happiest of campers when such acquisitions happen), but almost immediately after the news broke, we started hearing rumors around the office that the Red Hat rank and file weren't quite so enthusiastic. There are numerous reasons why, but I'll start at the top.

Before I do, though, simply bear in mind that we have not been able to independently confirm these reports. This is intended to be a compilation of various reactions and viewpoints to the news of the deal with a wee bit of analysis sprinkled throughout.

Concerns About the IBM-Red Hat Deal

Well, to start things off, pretty much right away, we heard that Red Hat's staff hadn't actually been informed about the deal.

ZDNet heard the same thing, evidently from staffers themselves.

The news, which had been scheduled to be released early next week, broke early. None of Red Hat's rank and file knew this was coming. Red Hat's leadership had no chance to let them know in a timely manner to comfort the blow.

I question that last line — and bear with me, I'm going to editorialize for a moment.

To be clear, I don't question ZDNet's reporting, but taking that at face value, how did Red Hat not have time to do this? Granted, there was a tightrope to maneuver. Since this deal is tied to stock price (IBM is offering $190 per share for Red Hat), there were undoubtedly concerns with announcing the deal internally too far in advance.

Still, this doesn't seem like it was an insurmountable problem. That's something of a puzzling internal silo.

Regardless, what I don't question is that Red Hat's staffers heard about the deal from the news and not from management.

And then, of course, there's the general fear that comes with the uncertainty of a future that you know is going to change, but don't know how. That's a very human reaction and would be present even if Red Hat's staff had been informed ahead of time.

And according to ZDNet, several Red Hat staffers had the following to say:

Well, that seems grim (again, we haven't independently corroborated these statements, but the sentiment absolutely matches up with what we've heard through the office grapevine).

Using this (admittedly tiny) dataset, plus what we've seen on Twitter and heard through the rumor mill, the concerns seem to fall into two general categories:

But not everyone inside Red Hat has been so down about the deal.

Little pointed out in a personal blog post that IBM spent one-third of its market cap to acquire Red Hat. "It’s in everyone’s interest in IBM to make it succeed and keep the great teams we have built up in Red Hat," he said.

That's a compelling, common sense argument. After all:

Little also references a blog post by Chris Aniszczyk, a Linux Foundation VP and CTO/COO of the Cloud Native Computing Foundation, who offered a pretty full-throated defense of the deal — and of IBM's bona fides when it comes to supporting open source development.

Aniszczyk, who said he's worked at both Red Hat and IBM, didn't discount the possibility that things could go awry, but he was optimistic about the upsides.

"... they have both been kindred spirits in making bets early on open source and I hope they bring that same zeal to the cloud," he said.

He also offered some practical advice for both parties.

Anyways, to my Red Hat colleagues, my advice would be to give this a chance for awhile as IBM has a lot of strengths that Red Hat could take advantage of, they are truly a global company and have a solid sales channel that is embedded all over the world.

To my IBM colleagues, don’t “bluewash” this company and almost treat this as a reverse merger, embrace the culture from Red Hat and you should honestly consider making Jim Whitehurst CEO of IBM and Chris Wright CTO of IBM. As Lou Gerstner said, “culture isn’t just one aspect of the game, it is the game” and this is one area that Red Hat can greatly help IBM as it navigates towards the cloud.

Where the IBM-Red Hat Acquisition Could Go Wrong

So, is all the fear and doubt just much ado about nothing? After all, these seem like pretty reasoned responses meant to calm the waters surrounding this turbulent deal.

But, let's consider the sources here, if only to put their words in the proper context. We have:

I don't bring up their positions to discredit what they have to say — far from it. Both of these people acted like leaders. They acknowledged the concerns surrounding the buyout, then offered encouragement and the reasoned advice they think will be necessary to achieve a golden future.

But by the very nature of their positions, they're going to have different viewpoints of this deal than, say, a front-end engineer working on Ansible.

And just as Little and Aniszczyk took very pragmatic stances in the face of uncertainty and fear within the ranks and found reasons to be upbeat, there are people who have taken the exact same approach and come to more pessimistic (or, as I'm sure they'd say, realistic) conclusions. 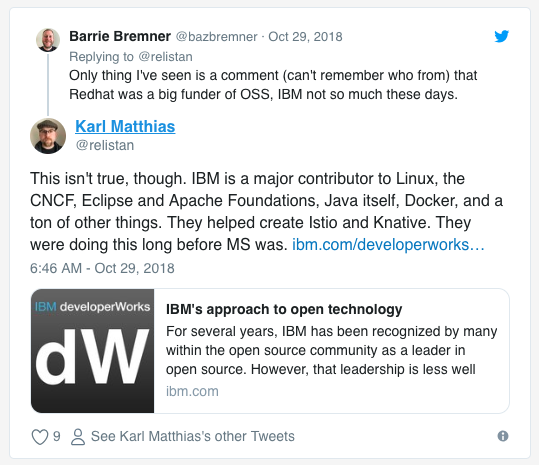 None of that is wrong.

IBM has a long history with Linux and has invested billions into the ecosystem, and they are no strangers to OSS support as a whole.

When it suits them.

WSO2 CEO Tyler Jewell acknowledged IBM's OSS support in a post of his own, but he also touched on the very first Red Hat staffer quote in that ZDNet article — the one who said, "I can't imagine a bigger culture clash."

"IBM’s bureaucracy places a fundamental orientation toward being commercial- and a patent-first mindset towards software innovation," Jewell said. "While IBM has participated in significant open source projects, it’s always been with a me-first mindset that works to exploit the positive advances of the open source upstream community."

Participation in an open source community project, whether maintained by the Company or by another commercial or non-commercial entity or organization, does not constitute a conflict of interest even where you may make a determination in the interest of the project that is adverse to the Company's interests.

That sounds flat-out alien in today's business climate. And it's likely a huge reason Red Hat's staffers are so enthusiastic about working there.

Sure, IBM could adopt that policy within its own organizational structure (and that would likely be their best bet to retain Red Hat's current staffers), but time will tell whether they do.

And remember, even Aniszczyk's support was somewhat conditional: "... you should honestly consider making Jim Whitehurst CEO of IBM and Chris Wright CTO of IBM."

It seems like a tacit acknowledgment that while the deal could be huge for both IBM and Red Hat, not to mention the cloud, open source, and middleware spaces, the current IBM leadership might not have the vision to make that happen.

Again, if this deal is going to fail, it's going to be because of competing cultures.

To that end, and I'm quoting Dr. Phil here, "The best indicator of future behavior is past behavior."

Tech and media analyst Ben Thompson took that point and ran with it.

Most of his article compares and contrasts the approaches of former IBM CEO Lou Gerstner, who came to the company in 1993 and is largely credited for its success in the '90s and 2000s, and his successors Sam Palmisano and Ginni Rometty.

Whereas Gerstner overhauled IBM's culture to successfully leverage the advent of the Internet, when it comes to IBM's stated goal of ruling the hybrid cloud market, Palmisiano said in 2010, "Enterprise will have its own unique model. You can’t do what we’re doing in a cloud."

Thompson also charged that Rometty has been little better on that front.

"... current CEO Ginni Rometty, who took over the company at the beginning of 2012, not only supported Palmisano’s disastrous Roadmap 2015," he said, "she actually undertook most of the cuts and financial engineering necessary to make it happen, before finally giving up in 2014."

So while IBM has a history of being both very forward-thinking and very narrow-minded, the more recent pattern of behavior might not lend much hope to those looking for it.

The Possibly Purple Future of IBM and Red Hat

So what does all of this speculation boil down to?

Well, the concerns of those Red Hat staffers certainly aren't unfounded. IBM has to take some clear, immediate steps in Red Hat's direction if it's going to retain Red Hat's team — assuming that's something IBM wants to do.

After all, it's entirely possible that Big Blue is just looking to loot Red Hat's technology and cement itself as more of a supplier and partner to AWS, Azure, and GCP, rather than a direct competitor. Again, IBM's goal is to become the number one hybrid cloud provider, not necessarily to dethrone the Big Three of the public cloud. That's a much narrower set of use cases — and one that IBM could be uniquely positioned to dominate with tools like OpenStack in its portfolio.

But this deal isn't slated to close until the second half of next year. In the meantime, I'd be very interested to see whether IBM openly embraces Red Hat's culture ahead of time. It'll be intriguing to see what Red Hat's workforce looks like a year from now.

My hope is that it's pretty much identical.