Thanks a lot to everyone who attended the Infinispan sessions I gave at Great Indian Developer Summit! Your questions after the talks were really insightful.

One of the talks I gave was titled Big Data in Action With Infinispan (slides are available here), where I was looking at how Infinispan-based in-memory data grids can help you deal with the problems of real-time Big Data and how to do Big Data analytics.

During the talk, I live-coded a demo showing both real-time and analytics parts, running on top of OpenShift and using Vert.x for joining the different parts. The demo repository contains background information on instructions to get started with the demo, but I thought it'd be useful to get focused step-by-step instructions in this blog post.

Before we start with any of the demos, it's necessary to run some set up steps:set up steps:

Once the setup is complete, it's time to talk about the demos before we run them.

Both demos below work with the same application domain: Swiss Rail Transport Systems. In this domain, we differentiate between physical stations, trains, station boards that are located in stations, and finally stops, which are individual entries in station boards.

Within the cloud, the Injector verticle cycles through station board data and injects it into Infinispan. Also within the cloud, a Vert.x verticle that uses Infinispan's Continuous Query to listen for station board entries that are delayed, and these are pushed into the Vert.x event bus, which in turn, via a SockJS bridge, get consumed via WebSockets from the dashboard. The centralized dashboards are written with JavaFX and run outside the cloud.

To run the demo, do the following: 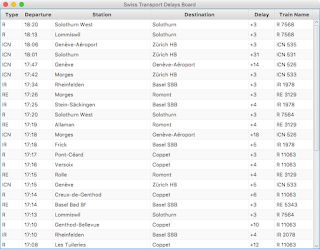 The first demo is focused on how you can use Infinispan for doing offline analytics. In particular, this demo tries to answer the following question:

What is the time of the day when there is the biggest ratio of delayed trains?

Once again, this demo runs on top of OpenShift cloud, uses Infinispan as in-memory data grid for storage and Vert.x for gluing components together.

This verticle will invoke a remote server task which will use Infinispan Distributed Java Streams to calculate the two pieces of information required to answer the question: per hour, how many trains are going through the system, and out of those, how many are delayed.

An important aspect to bear in mind about this server tasks is that it will only be executed in one of the nodes in the cluster. It does not matter which one. In turn, this node will ship the lambdas required to do the computation to each of the nodes so that they can executed against their local data. The other nodes will reply with the results and the node where the server task was invoked will aggregate the results.

The results will be sent back to the originating invoker, the Jupyter notebook which will plot the results. The following diagrams shows how the following components interact with each other to achieve this: 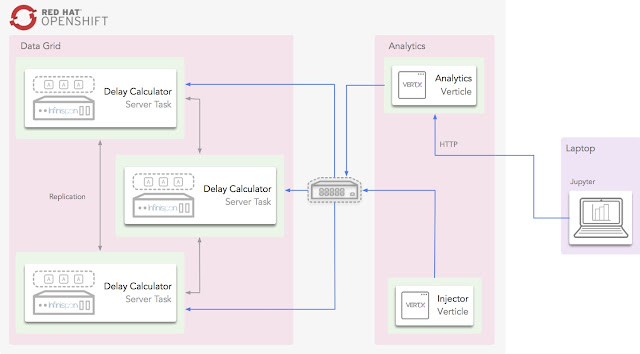 Here is the demo step-by-step guide: 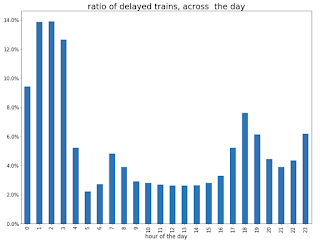 So, the answer to the question is 2 AM! That's because last connecting trains of the day wait for each other to avoid leaving passengers stranded.

This has been a summary of the demos that I presented at Great Indian Developer Summit with the intention of getting you running these demos as quickly as possible. The repository contains more detailed information on these demos. If there's anything unclear or any of the instructions above are not working, please let us know!

Once again, a very special thanks to Alexandre Masselot for being the inspiration for these demos. Merci, Alex! Over the next few months, we will be enhancing the demo and hopefully, we'll be able to do some more live demonstrations at other conferences.