ReactJS is a JavaScript library, built and maintained by Facebook. It was developed by Jordan Walke, a software engineer at Facebook. It was open-sourced and announced to the developer community in March 2015. Since then, it has undergone tremendous growth and adoption in the developer community. In fact, at the time of writing this article, ReactJS was the 5th most starred project of all time on GitHub.

Currently, many web platforms use ReactJS to build their user interfaces. Such platforms include Netflix, Instagram, Airbnb, KhanAcademy, Walmart and more. The documentation is very detailed, and there is a vibrant community of users. In addition, a plethora of ReactJS addons exists on GitHub for easy inclusion in your project for whatever functionality you are trying to build.

ReactJS was influenced by XHP, an augmentation of PHP and Hack to allow XML syntax for the purpose of creating custom and reusable HTML elements. If you're coming from the world of jQuery and don't have experience with frameworks like Angular, Ember, or VueJS, you may find ReactJS very confusing. There are many questions you might have to ask yourself, such as:

Don't worry, you'll have answers to your many questions soon! There are some key concepts you need to know when learning React. Once you have a basic understanding of these concepts, then you'll be able to create your first ReactJS app without banging your head on the wall.

These key concepts are:

I'll give a basic overview of these concepts to nourish your understanding of ReactJS.

Components - The Types and API

React is basically about components. A ReactJS app is just one big component made up of interoperable smaller components. Working with ReactJS means you are thinking in components most of the time.

An example of a component is an HTML 5 tag, say <header>. A header can have attributes, it can be styled and also possess its own behavior. In ReactJS, you'll be able to build your own custom component using ES6 like so:

There are also methods like render and setState that you can use to render an element in the DOM and set the state of a component respectively.

Take this example for a spin and watch how these lifecycle hooks work. Observe the sequence of logs in the browser console.

Props is the short form for properties. Properties are attributes of a component. In fact, props are how components talk to each other. A tag in HTML such as <img> , has an attribute, a.k.a. aprop called src that points to the location of an image.

In React, you can have two components, FatherComponent and SonComponent. Let's see how they can talk to each other.

Now, when the page is served and a <FatherComponent> is called, I am a true son. I have my father's eyes will be rendered on the page.

When developing ReactJS applications, it is important to know when and when not to use state in components. The question now is: When do I use state? When do I use props? Props are data that the component depends on to render correctly. Most of the time, it comes from above, meaning it is passed down from a parent component to a child component. Like props, state holds information about the component but it is handled differently. For example, the number of times a button was clicked, user input from a form, etc. When state changes in a component, the component automatically re-renders and updates the DOM.

Inside a component, state is managed using a setState function.

Now, this works great for simple applications like the one we'll build in this tutorial. For medium and large apps, it is recommended to use a state management library like Redux or MobX to avoid big balls of messy code and also to help you track every event happening within your app.

Initially, looking at JSX seems awkward. JSX is the combination of HTML and JavaScript code in the same file. You can decide to name the extension of the file .jsx or just .js. An example of JSX is:

You can check out more information on JSX here.

Next, let's build an application with ReactJS. 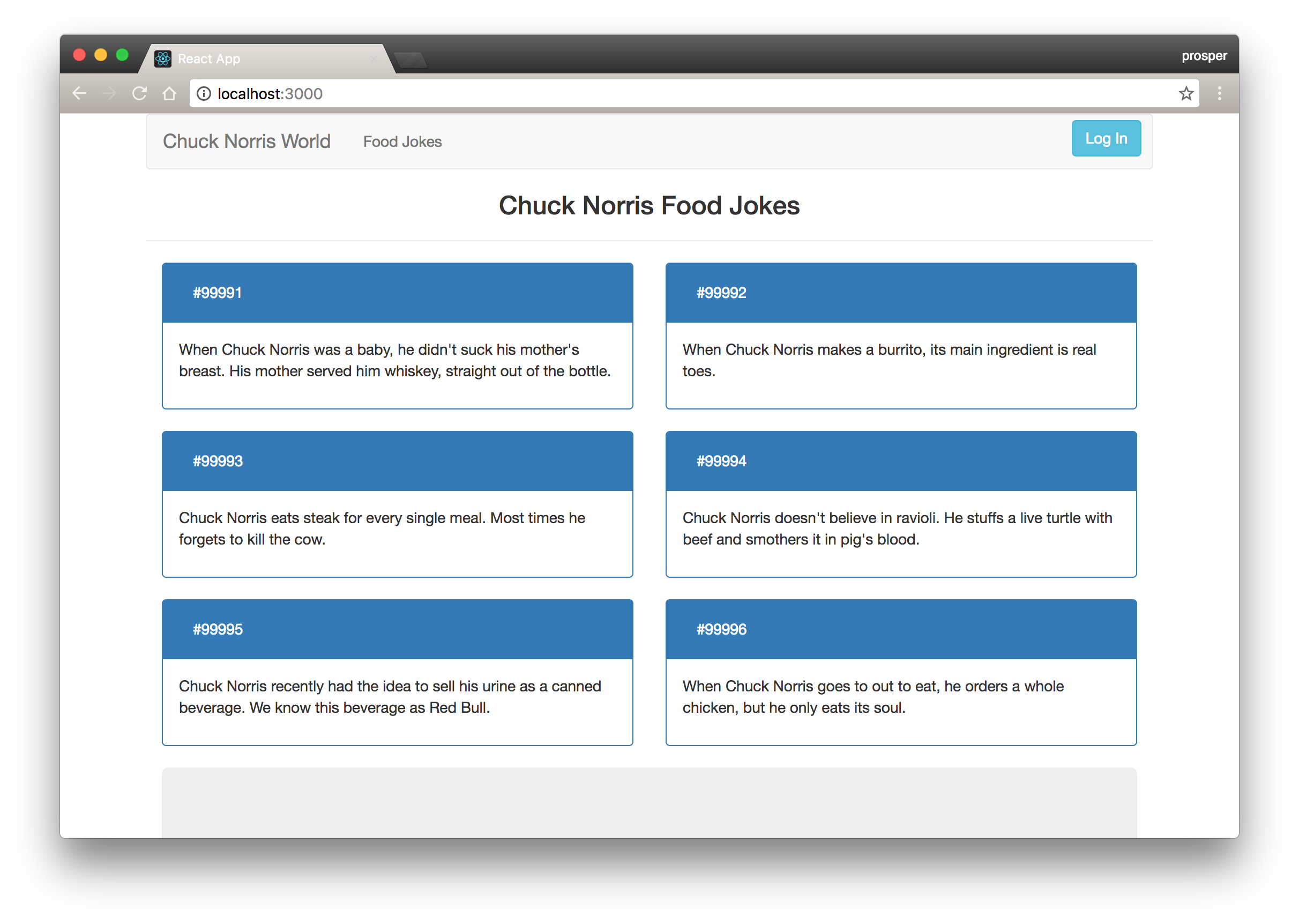 The app we will build in this series is called Chuck Norris World. Our app is an eye into the world of Chuck Norris and his greatness. The Chuck Norris World app will display different jokes about the legend. A list of common food jokes will be available to the general public, while the celebrity jokes will only be accessible to registered members.

Note: These days, celebrities demand a lot of cash for jokes made at their expense, and Chuck Norris isn't helping matters. Always cracking jokes about them, sigh!

Let's build an API to serve the list of jokes to our app. We'll quickly build the API with Node.js. The API is simple. This is what we need:

Go ahead and fetch the Node.js backend from GitHub.

Note: Make sure you have nodemon installed globally.

Once you have cloned the project, run an npm install, then use postman to serve your routes like so: 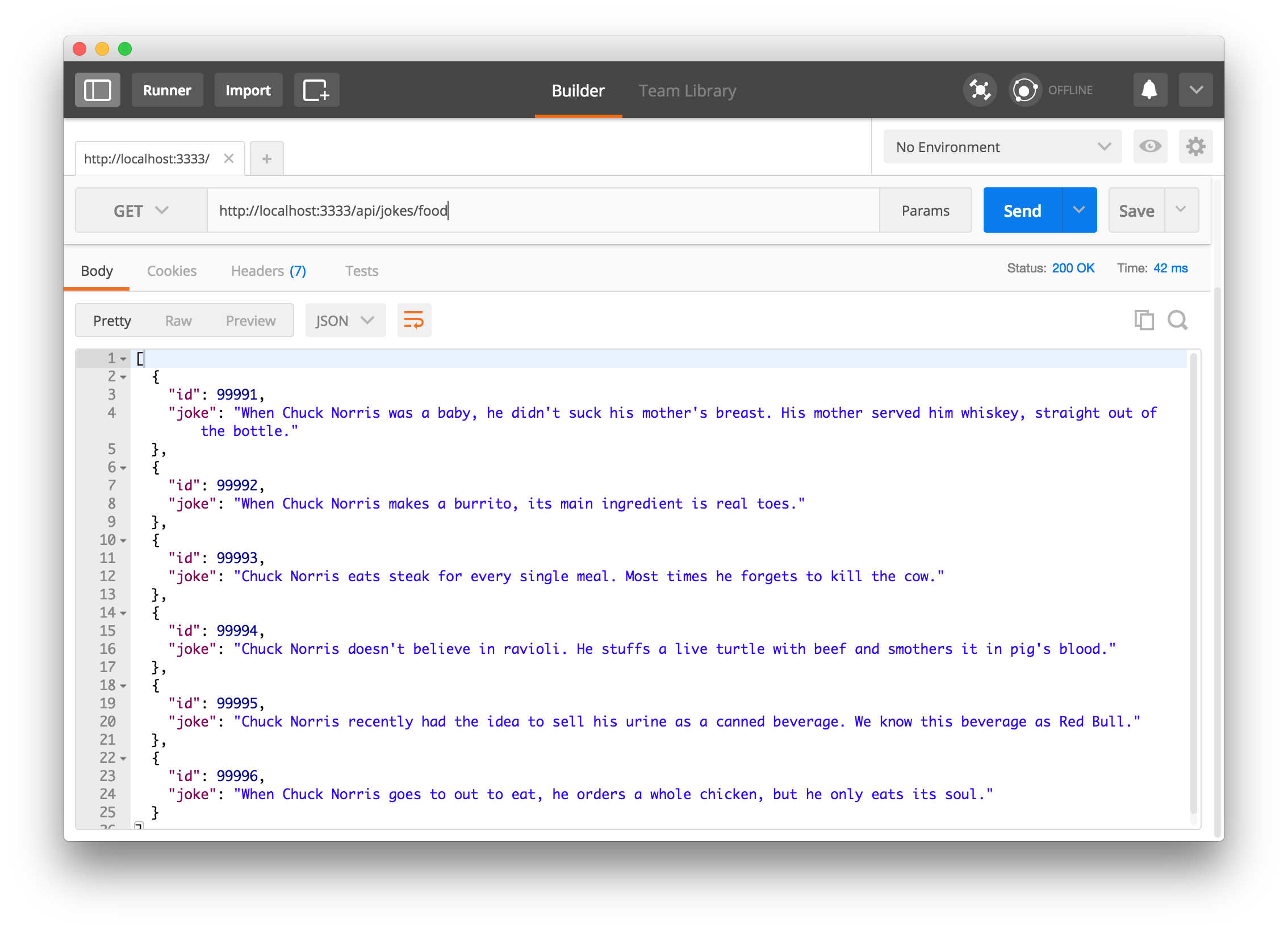 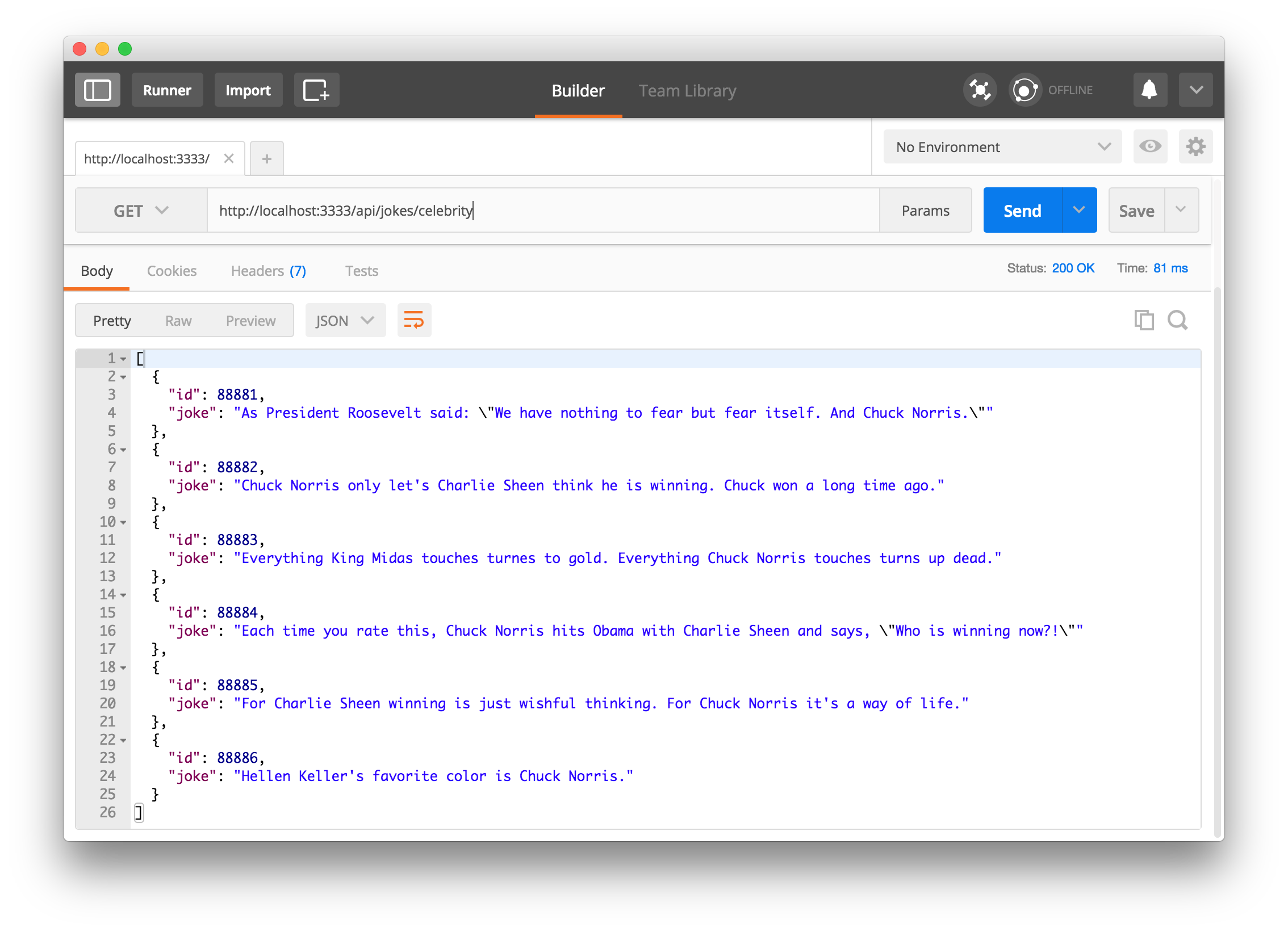 The Food jokes endpoint should be http://localhost:3333/api/jokes/food.

The Celebrity jokes endpoint should be http://localhost:3333/api/jokes/celebrity.

Don't worry about the middleware in charge of securing our endpoint for now. We'll deal with that later.

In Part 2 of this series, we'll build our frontend with ReactJS. Woot woot!