I recently ran into a case where a particular task (LineContainsRegExp) in an Apache Ant build file ran considerably slower in JDK 7 and JDK 8 than it did in JDK 6for extremely long character lines. Based on a simple example adapted from the Java code used by the LineContainsRegExp task, I was able to determine that the slowness has nothing to do with the regular expression, but rather has to do with reading characters from a file. The remainder of the post demonstrates this.

For my simple test, I first wrote a small Java class to write out a file that includes a line with as many characters as specified on the command line. The simple class, FileMaker, is shown next:

The above Java class exists solely to generate a file with a line that has as many characters as specified (actually one more than specified when the \n is counted). The next class actually demonstrates the difference between the runtime behavior between Java 6 and Java 7. The code for this Main class is adapted from Ant classes that help perform the file reading functionality used by LineContainsRegExp without the regular expression matching. In other words, the regular expression support is not included in my example, but this class executes much more quickly for very large lines when run in Java 6 than when run in Java 7 or Java 8.

The runtime performance difference when comparing Java 6 to Java 7 or Java 8 is more pronounced as the lines get larger in terms of number of characters. The next screen snapshot demonstrates running the example in Java 6 (indicated by "jdk1.6" being part of path name of java launcher) and then in Java 8 (no explicit path provided because Java 8 is my default JRE) against a freshly generated file called dustin.txtthat includes a line with 1 million (plus one) characters. 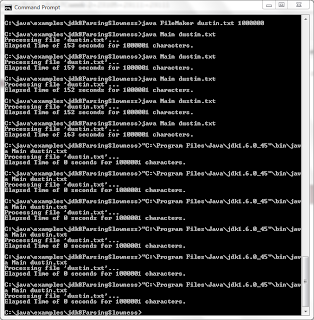 Although a Java 7 example is not shown in the screen snapshot above, my tests have shown that Java 7 has similar slowness to Java 8 in terms of processing very lone lines. Also, I have seen this in Windows and RedHat Linux JVMs. As the example indicates, the Java 6 version, even for a million characters in a line, reads the file in what rounds to 0 seconds. When the same compiled-for-Java-6 class file is executed with Java 8, the average length of time to handle the 1 million characters is over 150 seconds (2 1/2 minutes). This same slowness applies when the class is executed in Java 7 and also exists even when the class is compiled with JDK 7 or JDK 8.

Java 7 and Java 8 seem to be exponentially slower reading file characters as the number of characters on a line increases. When I raise the 1 million character line to 10 million characters as shown in the next screen snapshot, Java 6 still reads those very fast (still rounded to 0 seconds), but Java 8 requires over 5 hours to complete the task! 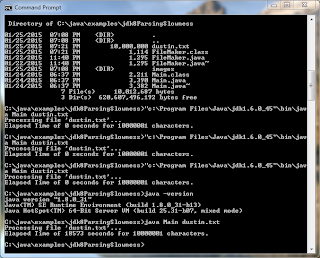 I don't know why Java 7 and Java 8 read a very long line from a file so much slower than Java 6 does. I hope that someone else can explain this. While I have several ideas for working around the issue, I would like to understand why Java 7 and Java 8 read lines with very large number of characters so much slower than Java 6. Here are the observations that can be made based on my testing: