I am primarily a service developer who has to create some passable UI's once in a while. I was adept at basic AngularJS1 based UI's and could get stuff done by using an approach that I have outlined before. With the advent of Angular 2 I had to unfortunately throw my previous approach out of the window and now have an approach with Spring Boot/ Angular 2 that works equally well.

The approach essentially works on the fact that a Spring Boot web application looks for static content in a very specific location - src/main/resources/static folder from the root of the project, so if I can get the final js content into this folder, then I am golden.

So let us jump into it.

There is primarily one pre-requisite - the excellent angular-cli tool which is a blessing for UI ignorant developers like me.The second optional but useful pre-requisite is the Spring-Boot CLI tool described here

Given these two tools, first create a Spring Boot web project either by starting from http://start.spring.io or using the following CLI command:

At this point a starter project should have been generated in the spring-boot-angular2-static-sample folder. From that folder generate a Angular 2 project using the angular-cli.

Change the location where angular-cli builds the artifacts, edit angular-cli.json and modify as follows: 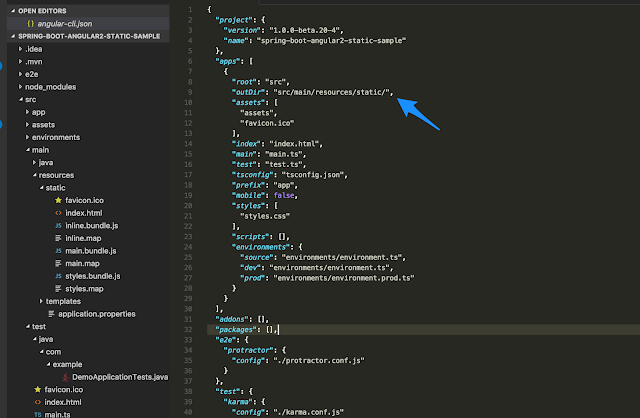 this should get the static content to the src/main/resources/static folder.

And start up the Spring-Boot app:

and the AngularJS2 based UI should render cleanly!

One of the advantages of using the Angular-cli is the excellent tool-chain that it comes with - one of them being the ability to make changes and view it reflected on the UI. This ability is lost with the approach documented here where the UI may be primarily driven by services hosted on the Spring-Boot project. To get back the live reload feature on the AngularJS2 development is however a cinch.

First proxy the backend, create a proxy.conf.json file with entry which looks like this:

and start up the Angular-cli server using the command:

and start up the server part independently using:

That is it, now the UI development can be carried out independent of the server side API's!. For an even greater punch just use the excellent devtools that is packaged with Spring Boot to get a live reload(more a restart) feature on the server side also.

This is the recipe I use for any basic UI that I may have to create, this approach probably is not ideal for large projects but should be a perfect fit for small internal projects. I have a sample starter with a backend call hooked up available in my GitHub repo here.