Dynimize, a dynamic binary optimizer, has been shown to improve MySQL performance in CPU intensive workloads. This post explores how Dynimize can be used to instantly reduce MySQL CPU usage without altering a single line of your application code or my.cnf.

You notice that the Linux top command shows that MySQL is consuming a lot of CPU resources, and you're worried that you're not leaving this server with enough breathing room. You've tried every piece of advice out there and nothing seems to make much of a difference to help reduce CPU usage. Or maybe it did help, but you'd still like to reduce CPU usage even further.

You may also like: Reducing High CPU on MySQL: A Case Study

Sometimes high MySQL CPU usage isn't the sign of a poorly written query or incorrectly configured database. Sometimes it's simply caused by having a high traffic workload. When we have a large volume of well-indexed queries hitting the buffer pool in memory, the performance bottleneck can get pushed to the CPU.

In light of that, this post is not about "fixing" high MySQL CPU usage as if it were some sort of bug or "mistake" you've made in your configuration, tables or queries. It's about enhancing the CPU performance and CPU efficiency of MySQL and MariaDB beyond what is possible by application or configuration changes alone. Let's explore further.

Dynimize is a dynamic binary optimizer by functioning as a machine code JIT compiler. You may have heard of JIT compilers for Java, which take in Java bytecode and live profiling information and combine the two to generate optimized machine code on the fly.

Below Is a Diagram of How It Works: 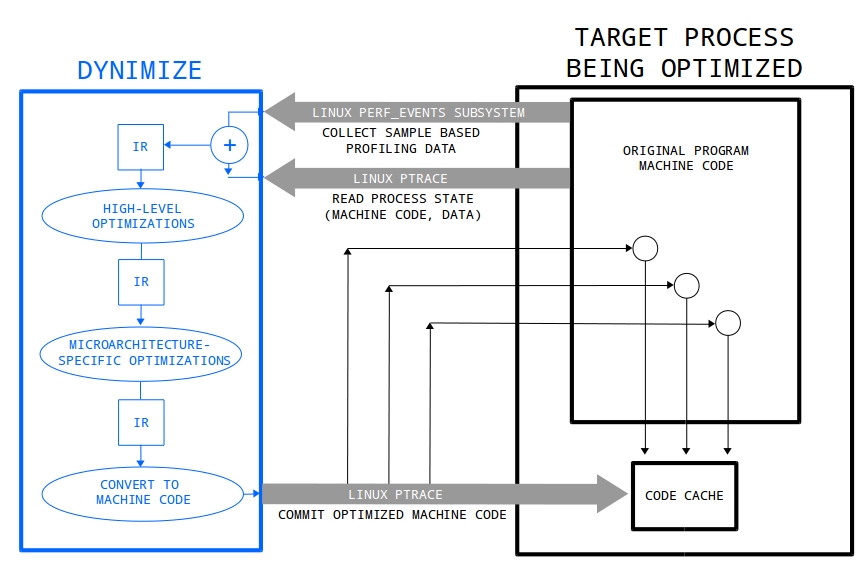 Stop and think about this for a second. Dynimize takes in-memory machine code and live profiling info of other processes as inputs and then produces more optimal machine code for those processes. You are probably thinking that the applications are vast. Indeed they are, however here we are only applying this to MySQL and MariaDB.

Dynimize transparently performs this, meaning that you don't need to modify your application, migrate servers, or even restart MySQL to apply Dynimize. This results in far less technical risk than what is usually undertaken when optimizing a database workload (outside of tuning a few my.cnf values). This also means that you can get immediate results with only a few simple commands, without any real effort or expert knowledge.

To install Dynimize, run the following commands in a Linux terminal.

sudo dyni -license=start -token=<access token>
To optimize any CPU intensive process who's exe is listed in the [exeList] section of /etc/dyni.conf, run:

The command dyni -status will show target processes progressing from the "profiling", to "dynimizing", and then "dynimized" states. A process has been fully optimized once in the "dynimized" state:

For the remainder of this post, we will explore different scenarios where Dynimize reduces CPU usage for both MariaDB and MySQL on DigitalOcean, AWS EC2, and Packet using both virtual and bare metal servers. All scripts used to run these tests, my.cnf and the output of these runs can be found in this GitHub repository.

The exact instance type and software stack used is listed below, and when combined with this repository one can easily run these experiments in the same manner. Note that in every case we performed a short warm-up run before taking measurements, to allow mysqld to become dynimized beforehand on the runs where Dynimize was in use.

It should be noted that these tests were done using a fixed rate of workloads. By using a fixed rate workload, improvements in CPU performance result in a reduction in CPU usage, since mysqld will not need to consume as many CPU time slices to accomplish the same amount of work.

This is also more realistic than simply running at full capacity and watching throughput increase once optimized since most online MySQL workloads are a function of traffic volume, which is not in your control and unfortunately will not magically increase by simply improving the performance of your server!

Point selects are the bread and butter of many MySQL workloads. If your high traffic workload is performing many select queries that are properly indexed, you have a sufficiently sized buffer pool, and you've done everything to optimize my.cnf, what else can you do other than change your application or architecture to start caching results, or migrate to a more expensive machine?

If modifying the application is even feasible, that could be a very labor-intensive, high-risk endeavor that could take time to implement. We'd also like something that involves as few changes as possible to minimize technical risk. Something as trivial as tweaking a setting in your my.cnf. So let's try Dynimize using Sysbench running well-indexed point selects with a fixed transaction rate.

In this test, we ran the Sysbench OLTP point select benchmark using 10 tables of 30 million rows each, for a total of 61 GB, with a buffer pool size of 24 GB, and a Pareto distribution with h = 1.0. By using a database that can't fit into memory, and a Pareto distribution that results in most transactions hitting the buffer pool, we create a somewhat realistic scenario that resembles a well-tuned database. This was run on an 8 core DigitalOcean droplet using MySQL 8.0.18 on Ubuntu 18.04 LTS. A fixed-rate of 25000 queries per second was used, and binary logging was enabled. 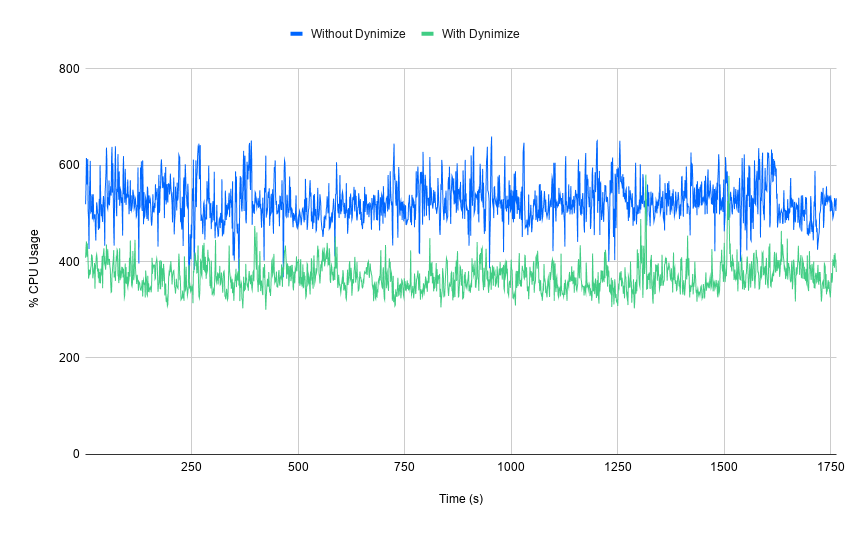 Next let's try this on something more complex like the TPC-C benchmark, an OLTP workload which is relatively heavy on writes. We'll use sysbench-tpcc to run these transactions at a fixed rate of 7500 TPS, with binary logging enabled. Note that this benchmark is not certified by the TPC council and its results cannot be considered official TPC-C results; however, it does provide us with an interesting test regardless:

In this instance, we're using MariaDB 10.4 on a dedicated 4 core server. The Sysbench Pareto distribution didn't seem to work for tpcc so we left it out. 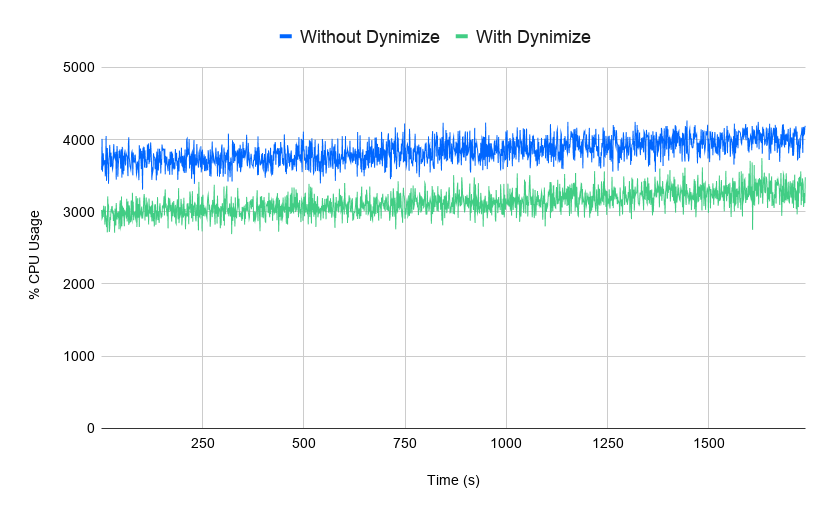 Above you can see the improvement using Dynimize on a very challenging transactional workload, with an overall improvement factor of 1.23, or a CPU usage reduction of 19%.

How about something real like WordPress? The next test uses an EC2 server running the same VM image used to serve this blog. The loadtest tool was used for benchmarking since it allows for fixed-rate workloads.

The runs were performed with the WordPress page cache disabled to stress MySQL, which is what happens when a logged-in user accesses this blog. Below are the results: 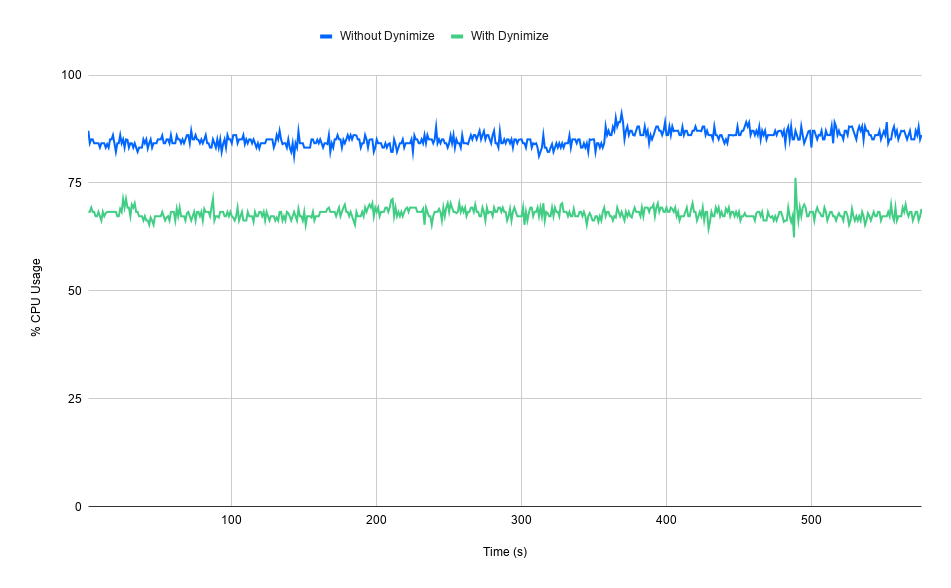 The above graph shows a reduction in MySQL CPU usage with an overall improvement factor of 1.26, or a CPU usage reduction of 21%.

Which Query Used the Most CPU? Implementing Extended Events

Published at DZone with permission of David Yeager. See the original article here.